In “Vote for Your Favorite Mac Markdown Editor” (20 July 2017), we asked you to rate the Mac text editors that you’ve used to write in the Markdown text markup language. Over 400 TidBITS readers responded to our survey of 42 apps, submitting nearly 2200 votes. As we thought might happen, BBEdit racked up by far the most votes and tied for the highest rating. But many other apps did well too, showing that the category has numerous entrants worth your time.

To evaluate the results, we calculated the weighted average for each app, assigning a weight of 1 (Avoid it) through 5 (Can’t live without it) for each of the five choices — the highest weighted average possible is thus 5. Apps that received only a handful of votes may have skewed weighted averages, so we also counted the raw number of votes each app received.

As noted, BBEdit took the honors with the most votes and the highest rating, but Ulysses tied BBEdit’s rating and was third in votes. They were the first apps in our surveys to have scored a weighted average over 4.

Rounding out the top five in vote count were Byword, Bear, and iA Writer, and Bear and iA Writer were third and fourth in ratings as well, with MultiMarkdown Composer taking the fifth rating spot despite a tenth place spot in the vote count. Although it collected the second highest number of votes, Byword managed only ninth in the ratings.

We were surprised at the number of responses and relative paucity of comments. Over 600 people voted for Mac personal information managers and personal finance apps, and over 800 for word processors. But despite reader demand and more promotion than usual, this survey attracted less than 450 respondents and many fewer comments than in previous surveys.

Here then is a list of the Mac Markdown editors most liked by TidBITS readers, sorted by rating, an ordering reflected in the first graph below (the second graph arranges the apps by the number of votes). Given the number of apps that received good ratings, we’re offering commentary for the five highest-rated apps. If you’re looking for a Markdown-focused editor, you’ll need to look into the highly rated apps on your own because only you know what features are important. The good news is that since Markdown is an open, portable format, you can’t go wrong. If you don’t care for one app, you can easily move your documents to another. 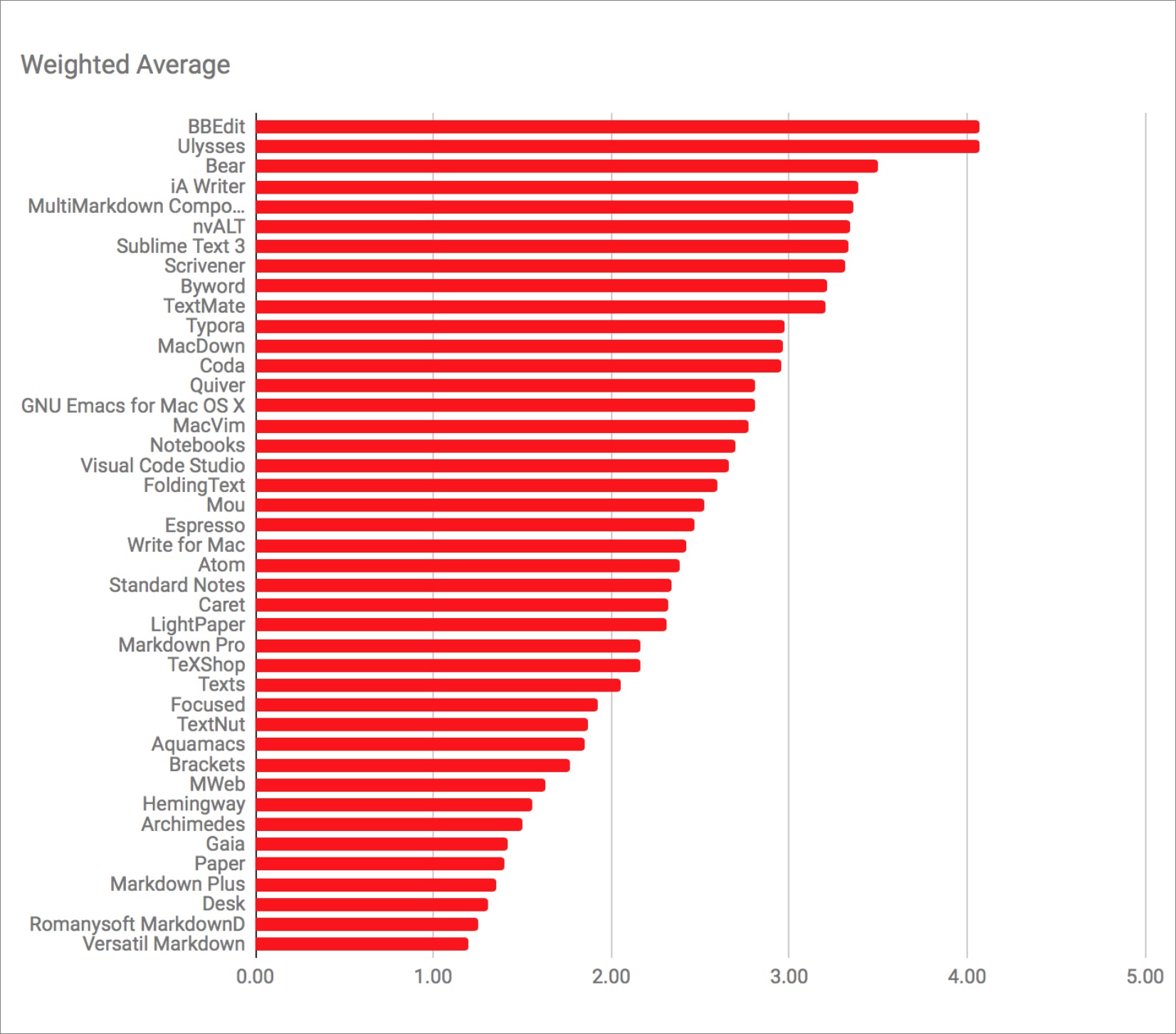 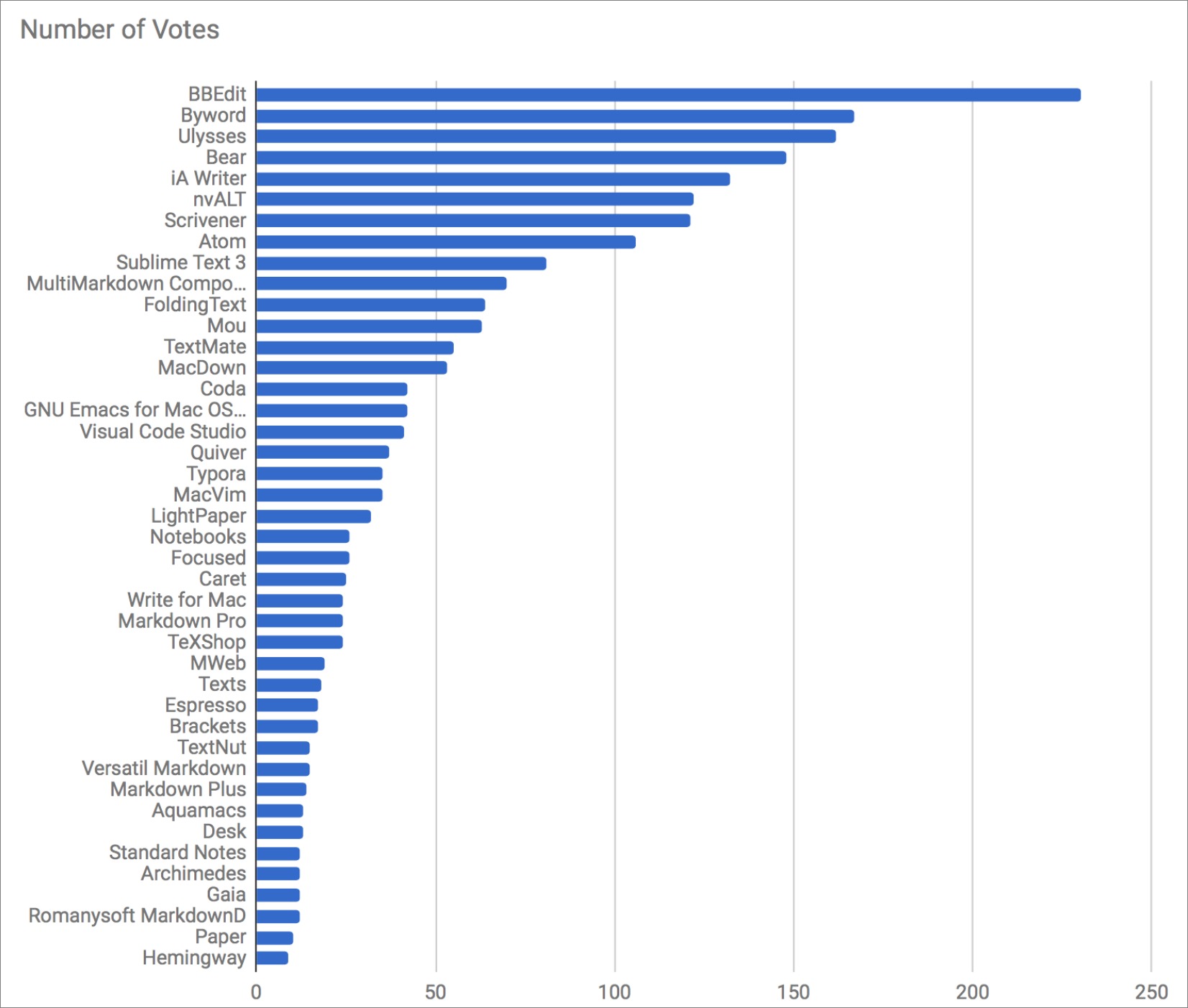 Since BBEdit has been our editor of choice for years, we were pleased to see BBEdit earn our highest reader rating ever. We can’t live without it, and many of you agree with that sentiment.

Lewis Butler wrote, “BBEdit is the only GUI text program I use, and I’ve tried dozens. The thing I like most about BBEdit is that it has phenomenal cosmic powers, but all those features never get in your way.”

Lisa Spangenberg said, “I love BBEdit. I have even forgiven Bare Bones Software for removing some of its HTML palettes (it wasn’t easy). I use it every day. It is my single most used, most useful, app. It does boring stuff, and lets me concentrate on content.”

DStaal agreed, saying, “The best thing about BBEdit for me is its flexibility — I have it set up to use Pandoc as a Markdown previewer, and I have multiple templates and preview filters, as well as straight text filters that I can apply from the menus.”

However, while one anonymous commenter praised BBEdit overall, they didn’t think that it’s the best Markdown-focused app on the market:

Markdown is there, but it’s not integrated like some apps. If I were looking just for a Markdown app, BBEdit wouldn’t be my first choice.

I love BBEdit, but not as much as I used to, as IA Writer has seduced me with features like Focus Mode, Typewriter Mode, easier-to-find blue-colored blinking cursor, and image-embedding (not to mention the excellent embedded Nitti Light font, and better Markdown with preview and trackpad support).

I have BBEdit, I use and love it still for some things, but for longer writing — especially for Markdown — there are better options.”

Ulysses is very much in vogue in with the Apple community, and it was our second-highest rated app. Our own Julio Ojeda-Zapata is a fan, as he wrote in “Writing App Ulysses Blends Power and Simplicity” (13 August 2016).

The popularity of Ulysses was likely bolstered by its companion iOS apps and the fact that it’s available to Setapp subscribers (see “Setapp Offers Numerous Mac Apps for One Monthly Subscription Fee,” 25 January 2017).

Despite all those votes and the high rating, we received only two comments about Ulysses. Olivier Spinnler wrote:

Ulysses has, IMHO, the best balance between power and lightness. This means elegance. Ulysses is an application with the utmost elegance. It can edit files in its own iCloud-synchronized library as well as external folders. I’m using it as an external editor for all the texts and notes I’m curating inside DEVONthink databases.

I’m also using Ulysses to edit Scrivener text files, taking advantage of Scrivener’s ability to synchronize with an external folder. Thus, I have the best of both worlds: the elegance and power of Ulysses as an editor, and the robustness of Scrivener as a library manager with powerful metadata capabilities.

Trevor Williams also provided a sense of what Ulysses can do, saying, “I had a 250+ page document in Pages that I converted into Markdown within Ulysses, splitting up each section to be its own “sheet” and each chapter in its own group. That makes maintaining a large body of work very simple as you can quickly find, edit, organize, preview, and export changes. Its export capabilities make Ulysses stand out from the rest. Ulysses makes writing an enjoyable activity. Hopefully, they add built-in support for MultiMarkdown syntax in its live previewer in an upcoming release.”

Like Ulysses, Bear maintains all of your Markdown documents within the app, and it works on both macOS and iOS. It lets you link between notes, tag notes with hashtags, add todos inside of notes, and it supports over 20 programming languages.

Lisa Spangenberg contributed the only comment about Bear. “I started using Bear in early 2017 because I had terrible ‘net access and needed to be able to use iOS and macOS to write. It produces clean export in HTML, RTF, and Markdown (I moved to the in-app Pro version in less than a month). Movement from macOS to iOS and back is seamless. No footnotes, so not great for scholarly stuff, but still really well done.”

iA Writer has long been popular with the Apple community, thanks in part to supporting both macOS and iOS. It’s also famous for its opinionated design and lack of options. Stephen Fry has praised it for its simplicity.

TidBITS readers were similarly complimentary, with Tommy Weir saying, “iA Writer is my default Markdown editor in both iOS and MacOS. A simple swipe takes you from the list of documents to the editor; another swipe takes you to a preview mode. Clean design, nice typography. Does one thing, does it well.”

iA Writer is what I use for most of my writing, on both Mac and iOS, where you can currently live sync with either iCloud or Dropbox. (I also use BBEdit, which I commented on as well above.)

Markdown is well-supported and integrated, but some of the extra features are what keeps me excited to use it: Focus Mode, Typewriter Mode, easier-to-find blue-colored blinking cursor, image/table-embedding, the excellent embedded Nitti Light font, trackpad support for swiping between library, writing, and preview panes (or hiding preview and/or library panes). You can also create or download custom templates for previewing, export, and printing.

iA Writer also has an interesting, unique feature that seems a little complicated at first glance but is extremely appealing when writing long-form: you can structure documents with content blocks based on local file references, and therefore include images, tables, and even CSVs. They offer this transclusion as a Markdown expansion, and it’s explained here.

The Rest of the Markdown Editors — For the remaining 37 apps, we’ve listed the number of votes, rating, and price, and included a link to the app’s Web site, along with a link to any available comments about it.

Inside TidBITS Productivity Your Favorite Apps