In “Flash & the Future of Interactive Content,” Adobe has announced that it will kill Flash in 2020, nearly a decade after Steve Jobs wrote his “Thoughts on Flash” letter that outlined why Apple wouldn’t allow Flash to run in iOS. Specifically, Adobe will stop updating and distributing Flash Player at the end of 2020. That delay will give Flash-reliant businesses like CNN and industries like online gaming several years to migrate to new technologies.

As open standards like HTML5, WebGL and WebAssembly have matured over the past several years, most now provide many of the capabilities and functionalities that plugins pioneered and have become a viable alternative for content on the Web. Over time, we’ve seen helper apps evolve to become plugins, and more recently, have seen many of these plugin capabilities get incorporated into open web standards. Today, most browser vendors are integrating capabilities once provided by plugins directly into browsers and deprecating plugins.

Unsurprisingly, Adobe made no mention of Flash’s drawbacks, such as security flaws and excessive power usage.

Adobe is partnering with Apple, Facebook, Google, Microsoft, and Mozilla to help move existing Flash content to open standards like the aforementioned HTML5, WebGL, and WebAssembly.

Google has published Flash usage trends that show that only 17 percent of Google Chrome users encounter at least one page containing Flash content per day, down from 80 percent in 2014. It also calls out the fact that Flash is most heavily used on Facebook, which undoubtedly accounts for Facebook’s inclusion in the list of partners above, the rest of which are browser makers. 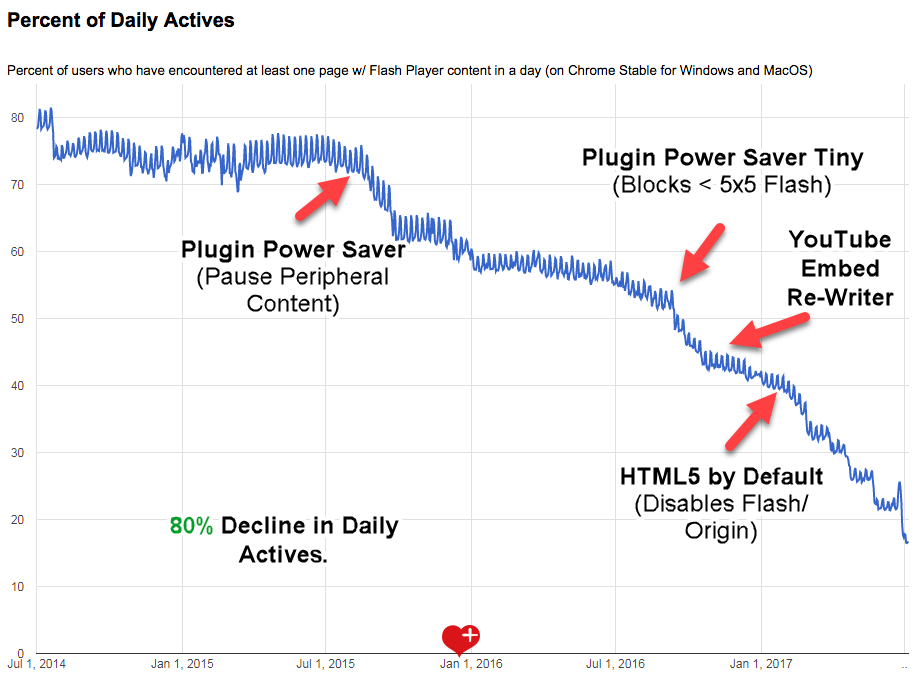 Comments About Adobe to Kill Flash… In 2020