While I was at MacTech Pro in New York City recently, I learned an interesting fact while chatting with one of the consultants in attendance. When you buy a 2017 iMac — either the 21.5-inch model or the 27-inch model — you can configure it with a 1 TB Fusion Drive for storage, but the hardware specs of that particular drive might give you pause.

Apple’s Fusion Drive combines hard disk and SSD storage in a drive that appears to the operating system as a single volume. Hard disks provide a lot of storage for a low cost per gigabyte, but they’re relatively slow. SSDs — solid-state drives — are much faster but can cost over 5 times more per gigabyte. By fusing the hard disk and SSD into a single volume, a Fusion Drive provides a lot more storage than an SSD with far better performance than a hard disk. macOS achieves this performance by storing operating system files, commonly used apps, and your most frequently used data on the SSD. Adjusting data storage locations happens behind the scenes, so you don’t (and
can’t) know what data is stored where — some files may even be stored in both places.

Personally, I don’t need that much storage, so I stick with SSDs on my Macs, but the Fusion Drive is a good compromise for many iMac buyers.

I’d heard rumors that Apple had at some point reduced the amount of SSD storage in the 1 TB Fusion Drive, but I didn’t know where to confirm the amounts until hearing about it at MacTech Pro. Strangely, Apple doesn’t mention the sizes of the hard disk and SSD in the Fusion Drive on the Tech Specs page for the Macs that have it as an option (the iMac and the Mac mini). Instead, you can find the information only by configuring a Mac for purchase, and clicking the “How much storage is right for you?” link above the storage options. That displays a pop-up with the details. 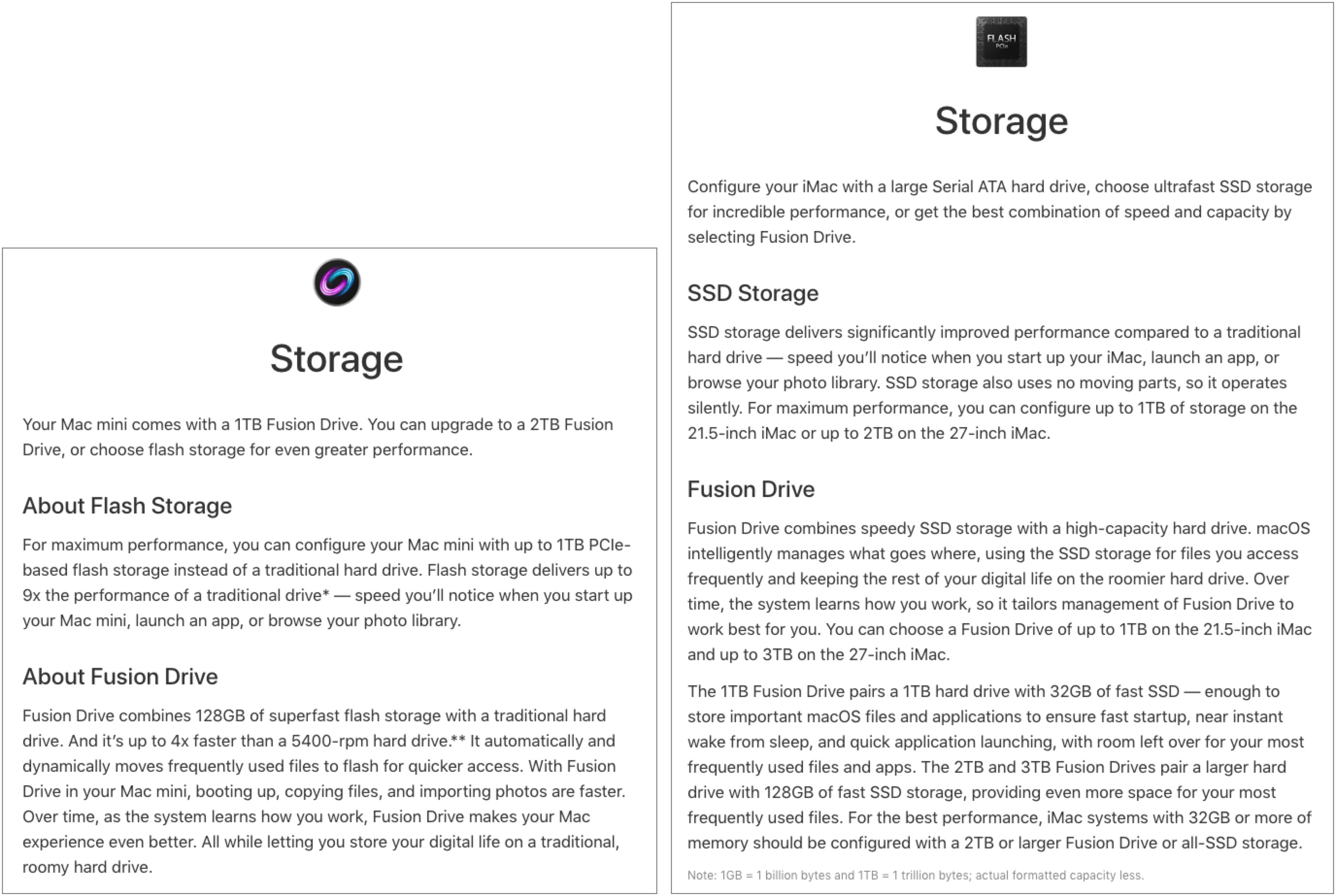 Regardless, the practical upshot of this information is that I would encourage anyone considering an iMac to avoid the 1 TB Fusion Drive. Instead, you could spend an extra $100–$200 on a 256 GB SSD and get an inexpensive external hard disk to hold large amounts of data. Alternatively, you could pay an extra $200 or $300 and get either the 2 TB or 3 TB Fusion Drive.

Whatever you do, don’t get an iMac with just the 1 TB hard disk. I think it’s a big mistake to configure any Mac with just a hard disk these days because the Fusion Drive and particularly SSDs are so much faster. An SSD or Fusion Drive provides the most performance gain you can get for your buck.

Finally, Apple, why aren’t you listing these key details about the Fusion Drives on the actual Tech Specs page for these machines? It’s borderline deceptive to hide it behind a pop-up on the purchase page.