For those with a MacBook Pro with Touch Bar, Parallels Desktop 13 provides integration for Microsoft Outlook, Word, Excel, and PowerPoint, as well as browsers including Internet Explorer and Microsoft Edge. When using the Windows Start Menu or Desktop, the Touch Bar includes Taskbar-pinned elements as well as Cortana, Task View, and settings. The new Picture-in-Picture (PiP) View creates windows of other active virtual machines, and Parallels Desktop comes with over 30 installed utilities that range from freeing up disk space and downloading video from Web sites to recording your screen.

The standard edition of Parallels Desktop (positioned for home and student use) costs $79.99 as a one-time purchase or $49 as an upgrade for those with previous licenses. (A 14-day free trial is available.) The Pro edition switches to a subscription model priced at $99 per year (with a $49 renewal subscription), and it adds the capability to assign up to 32 cores (vCPU) and 128 GB of vRAM per virtual machine, app performance analysis and optimization, and automatic resolution switching based on use (such as podcast, video tutorial, or Web browser testing). The Business edition is also priced at $99 per year (with no upgrade option), and it includes Single Application Mode
deployment and the capability to add selected Windows applications to a user’s Dock upon deployment. ($79.99 new for standard edition ($49.99 upgrade), $99.99 annual subscription for Pro/Business Edition ($49.99 renewal for Pro), 251 MB, release notes, 10.10.5+)

Carbon Copy Cloner 5.0 — Celebrating its 15th year of creating bootable backups, Bombich Software has released Carbon Copy Cloner 5.0 (CCC) with support for macOS 10.13 High Sierra and Apple’s new APFS file system (see “Tripping to macOS 10.13 High Sierra,” 5 June 2017). According to this blog post, CCC 5.0 can create bootable system backups from APFS to APFS, HFS to APFS, and APFS to HFS (as well as HFS to HFS),
while also supporting APFS encryption for both source and destination and for remote Mac source and destination volumes.

CCC 5.0 also updates its user interface with task groups that have both organizational and runtime behaviors, improves its SafetyNet pruning settings to adapt to the amount of data your tasks need to copy, provides guided restore tips when booting your Mac from a CCC backup, and brings new scheduling options (including hourly runtime limits). The release also enables sorting of tasks by name, exit status, last run date, and next run date; provides easier access to mounting and unmounting volumes; and adds a trend chart to the Task History window. 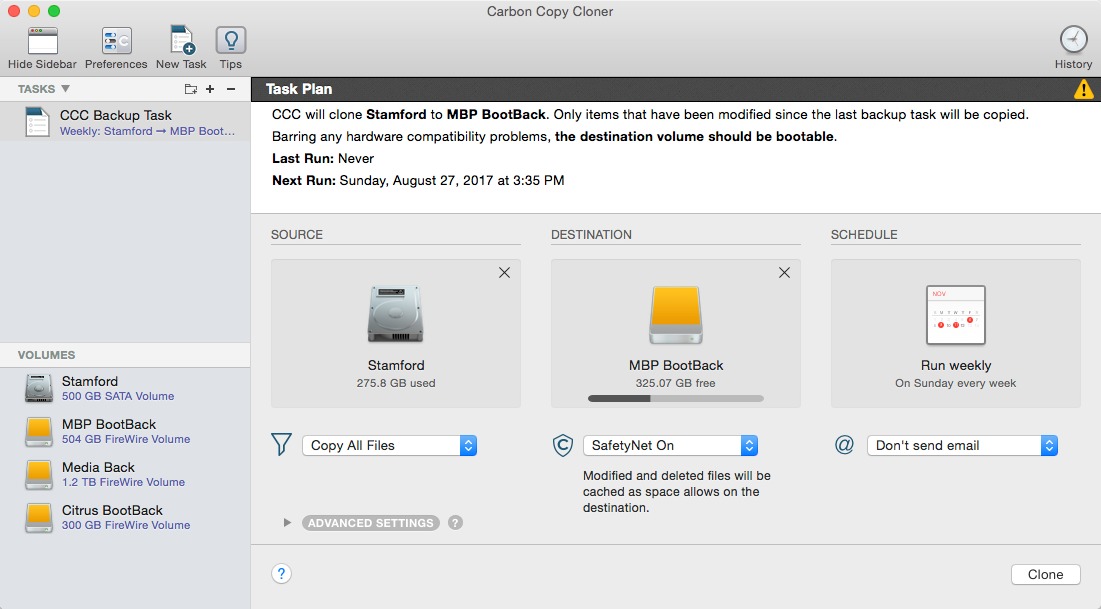 Mellel 4.0 — RedleX has released Mellel 4.0, a major update with 95 new features and enhancements for the word processor designed for long documents. The release introduces the new Quick Index feature, which shortens the index creation process by 50 percent thanks to a more efficient search of headings and bold-faced text that enables the index to be built dynamically as you work. It also adds a new Story feature that lets you add story points to a manuscript and use them to navigate through the document to attach characters and locations.

DEVONthink/DEVONnote 2.9.15 — DEVONtechnologies has updated all three editions of DEVONthink (Personal, Pro, and Pro Office) and DEVONnote to version 2.9.15 with a revised PDF sidebar that deals with some long-standing issues with OS X 10.11 El Capitan and later. All four apps add a new URL command for creating groups (x-devonthink://createGroup), improve compatibility with macOS 10.13 High Sierra, enhance memory management and handling of background tasks, and fix an issue where importing previously exported folders into the Tags group
could create duplicate tags. They also get enhanced clipboard, drag-and-drop, and keyboard navigation support.

All three editions of DEVONthink resolve links in internal HTML or Markdown files to match DEVONthink To Go and other compatible apps (such as MathJax), bring extended drag-and-drop support for Tinderbox, fix a bug that caused an edited HTML page to change its URL to the path of the page, resolve an issue where scanning from network scanners timed out, and address an issue with High Sierra where it was no longer possible to scroll images with the mouse wheel. DEVONthink Pro Office improves support of the Apple Mail plug-in and email archiving in High Sierra and improves the Import, OCR & Delete folder action script.

SpamSieve 2.9.29 — Michael Tsai of C-Command Software has released SpamSieve 2.9.29 to add compatibility with Apple Mail in macOS 10.13 High Sierra. The spam filtering utility also makes a variety of improvements to filtering email in Microsoft Outlook 2016, including working around a hang that occurred with large mailboxes, adding an optional Large Inboxes setup to improve the speed of processing messages, and improving logging and error reporting. The release also updates the Apple Mail — Remote Training script to set and clear message background colors and (optionally) flags, fixes the permissions of the log file if
necessary, improves detection and reporting problems with the launch agent, and updates several sections of the manual. ($30 new with a 20 percent discount for TidBITS members, free update, 13.7 MB, release notes, 10.6+)

1Password 6.8.1 — AgileBits has issued 1Password 6.8.1, a maintenance release for the password management utility with improvements to Native Messaging support for Chrome and Firefox and removal of a dialog so accounts created before 3 December 2015 can use the New Vault functionality in macOS 10.13 High Sierra. The update also fixes a bug that caused the main window to have a stale Touch ID state, resolves several issues with Quick Look, addresses a problem that prevented users from turning off Watchtower, and eliminates a bug that could cause the Mac App Store version to crash on launch. ($64.99 new from AgileBits and Mac App Store or free with a $2.99 or $4.99 per month subscription, free update, 48.6 MB, release notes, 10.10+)

Mailplane 3.7 — Uncomplex has released Mailplane 3.7 with its own version of the Quote Selected Text feature (previously provided by a now-retired Gmail Lab), which TidBITS publisher Adam Engst suggested to Uncomplex and subsequently helped them tweak. To use the feature, select some text and then press Command-R to Reply or Command-Option-R to Reply All. The Gmail-specific email client also adds a Bookmarks feature (a replacement for the retired Quick Links Gmail Lab) for saving frequent searches or links to
individual messages, and it adds support for the public beta of macOS 10.13 High Sierra. ($24.95 new, free update, 63.2 MB, release notes, 10.10+)