Say what you will about the deluge of subscriptions, but I like subscribing to a streaming music service so I can explore music without the stress of having to decide if I want to buy any particular track. The first service I used was the much-missed Rdio. I stuck with Rdio because of its elegant interface even after testing out Apple Music during its free trial (see “Retuning Rdio: Why I Dropped Apple Music,” 7 October 2015). When Rdio went under, I switched to Spotify instead of Apple Music because Spotify’s interface was more focused on discovering and playing music, whereas iTunes was at a particularly low point in Apple’s interface experimentation. I also liked how Spotify
could display lyrics, a feature that wasn’t available in iTunes at the time.

Spotify worked well for me for a while, but in May 2016, the lyrics feature disappeared. Spotify had been working with Musixmatch for lyrics, but said at the time:

Just a heads up that our Lyrics feature on desktop is currently unavailable as we’re making some big improvements to the feature. We’ll share more updates soon. We can also confirm our partnership with Musixmatch is ending. It was a great partnership and there is mutual respect between both companies as our business strategies move us each in different directions.

Alas, Spotify never brought back the lyrics feature. Musixmatch offers standalone Mac and iOS apps that can show lyrics for the currently playing song, but I found using them to be too much trouble most of the time.

Losing lyrics was a blow, but the straw that broke the camel’s back was when I ran headfirst into Spotify’s 10,000 track limit. You read that right — despite the fact that Spotify is a streaming service that contains over 30 million tracks, you cannot add more than 10,000 to your collection. This utterly arbitrary limit was a true deal-breaker.

The limit isn’t new, though I didn’t know about it when I signed up for Spotify. In 2014, user takingbackbenny started a Spotify Community discussion devoted to the limit that has garnered over 4500 votes and generated 300 pages of comments from Spotify users who are shocked that the service would have such a limit. Several years after it started, Spotify staff
said:

At the moment we don’t have plans to extend the Your Music limit. The reason is because less than 1% of users reach it. The current limit ensures a great experience for 99% of users instead of an “OK” experience for 100%.

Spotify never explains why changing an arbitrary number in the code from 10,000 to 50,000 (Google Play Music’s limit) or 100,000 (Apple Music’s limit) would somehow hurt the experience for those who don’t want to save that many tracks. A Spotify music collection is just a list of tracks, so it’s hard to imagine how allowing that list to exceed 10,000 could cause any problems. Regardless, many people in that discussion (and many other related threads) have said the limit is why they’re leaving Spotify, and it was the key reason for me to pay Apple instead of Spotify for music.

I enjoy following the trail of related or recommended music to find new music from previously unknown artists. When I find music I like, I add it to my library so I can find it again by scrolling through my library, and so additional algorithmic recommendations take it into account. It was all too easy to hit 10,000 tracks doing that.

I was able to export my Spotify collection to a text file (and then into a simple Panorama database), so I could be sure that I wouldn’t lose it, but I wasn’t able to find any automated way to add those tracks to my Apple Music library. (Commenters have recommended several iOS apps that I haven’t had a chance to try yet.) I’m not too bothered by that, since it lets me work through my collection manually. I can add each album back, and if I have time, I can explore more related music. It’s not about efficiency; it’s about wandering through the world’s largest record store. I didn’t even import my collection of music ripped from CDs since I can likely find it all in Apple Music, and it had become rather random anyway.

As much as Apple Music raises Spotify’s track limit tenfold, it’s not a complete win. Spotify did a better job of providing constantly changing selections of music to play. It offered six genre-driven Daily Mix playlists that combined tracks from my collection with related recommendations, and its Discover Weekly playlist was always worthwhile for finding new music.

In contrast, Apple Music’s My Favorites Mix and My Chill Mix playlists update only once per week and contain just 25 songs, which feels weak. Apple Music also provides some curated playlists and recommended albums, but when I just want to play music without thinking about it, Spotify’s Daily Mixes were near
perfect. Apple Music requires more interaction.

Although the interface of iTunes 12.6 has settled down, it’s still confusing and cluttered, thanks to the awkward splits between your library (which might include local music), Apple Music, and the iTunes Store. The iOS Music app has also improved over time, but it still took me a while before I figured out how to turn off shuffle, given that the control was hidden out of sight on my iPhone screen with no indication that scrolling was necessary. 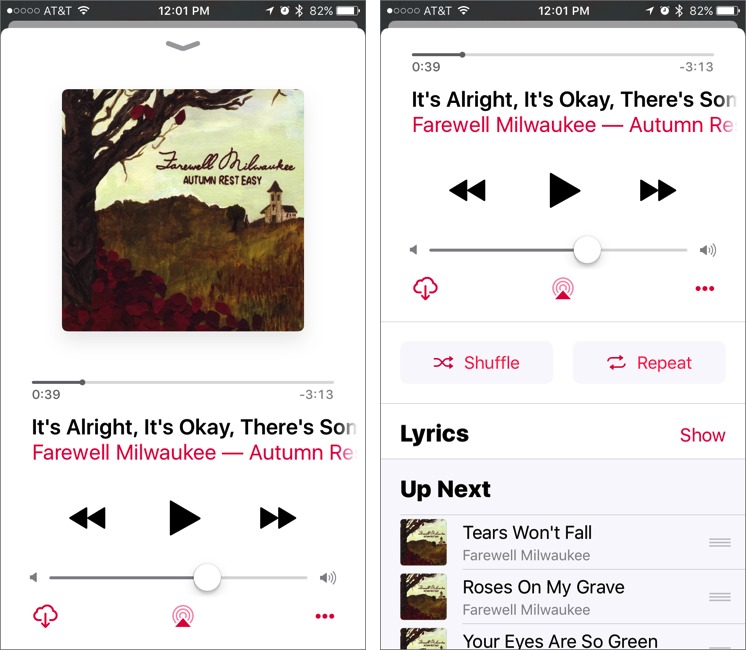 I can’t say that I’ll stick with Apple Music forever, but with Spotify seemingly uninterested in expanding its limit and providing lyrics, Apple has a better set of features for now. I’m also looking forward to trying the HomePod with it. And if Spotify ever gets its act together, I can always switch back.

Comments About The 10,000 Track Limit: Why I Switched from Spotify to Apple Music