At Apple’s special event on 12 September 2017, the company threw back the curtain on the latest iPhone models, the iPhone 8 and iPhone 8 Plus, which are logically next in line after last year’s iPhone 7 and iPhone 7 Plus, and the ground-breaking iPhone X. (That’s the same Roman numeral X as Apple used in Mac OS X, so it’s pronounced “iPhone 10.”)

iPhone 8 and 8 Plus — Breaking with tradition, Apple jumped directly from the iPhone 7 to the iPhone 8, bypassing the expected iPhone 7s. That makes sense because the iPhone 8 boasts a new industrial design and a few major new hardware features — it’s more than an enhanced iPhone 7. 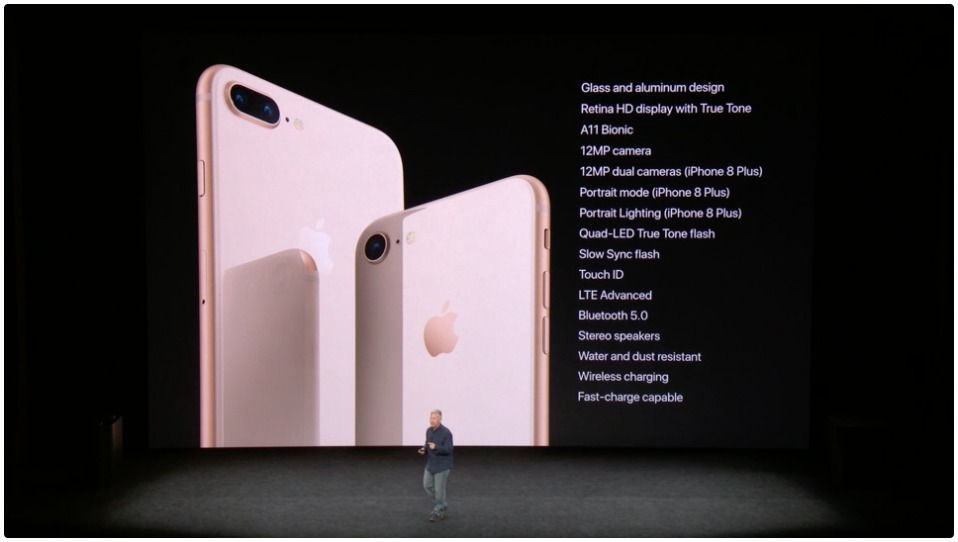 Apple has returned to a mostly glass case, claiming that it’s the most durable glass ever used in a smartphone. We won’t be putting that to the test, but the reason for the glass is that the iPhone 8 supports the Qi wireless charging standard (pronounced “chee”). Charging pads are available, and furniture retailer IKEA has even introduced tables with integrated wireless chargers. Apple said that next year it would release an AirPower charging mat that could charge an iPhone 8 or iPhone X,
Apple Watch Series 3, and a set of AirPods with an optional new charging case. Lightning ports remain standard in the iPhone 8 so you can still plug in to charge. 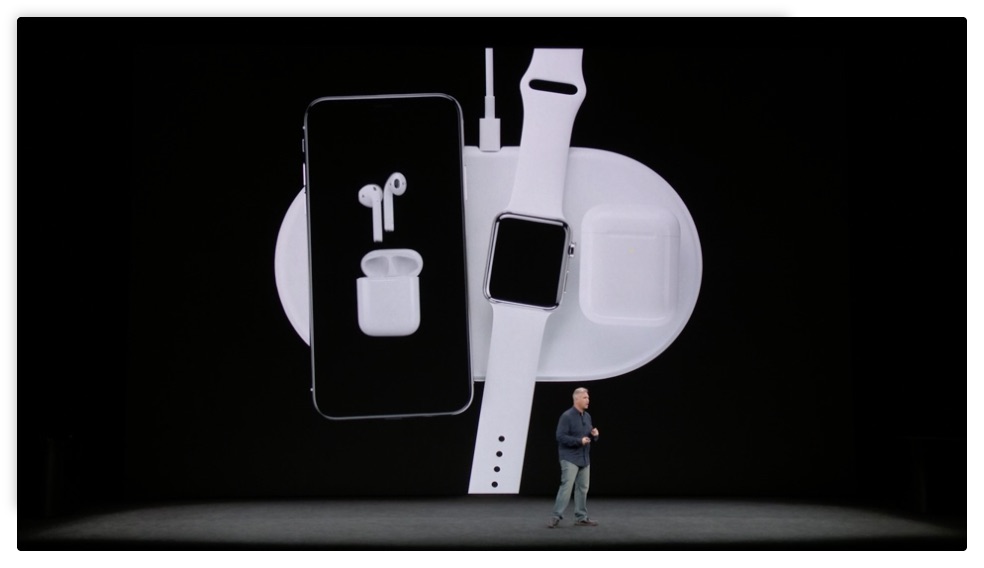 The iPhone 8 and 8 Plus have reinforced steel innards and are sealed to provide water and dust resistance. The water resistance is IP67, the same as the iPhone 7. The physical sizes are nearly the same as the iPhone 7 and 7 Plus as well, varying only by 0.1 or 0.2 millimeters in various dimensions. Between the glass and the steel, however, the new models are slightly heavier, weighing in at 5.22 ounces (148 grams) and 7.13 ounces (202 grams), which are 10 and 14 grams heavier, respectively.

The screens on both the 4.7-inch iPhone 8 and 5.5-inch iPhone 8 Plus sport the same basic technical specs as the previous models as well. However, the new iPhone displays now support Apple’s True Tone technology, which changes the brightness and color of the display based on the ambient light. Apple claims that the new iPhones’ speakers are 25 percent louder than the iPhone 7 and boast deeper bass.

Much has been made of ARKit, Apple’s augmented reality technology in iOS 11 (“ARKit: Augmented Reality for More Than Gaming,” 28 July 2017). To provide the best possible experience for AR and other processor-hungry tasks, Apple has given the new iPhones a new chip, the A11 Bionic, with a neural engine. It also has an updated M11 motion coprocessor. Apple claims that the A11 Bionic is the most powerful chip ever in a smartphone, with a six-core CPU that can deliver up to 70 percent better performance than the A10. The iPhone 8 also includes Apple’s first-ever in-house GPU, which is 30 percent faster than the previous GPU and can deliver iPhone-7-level performance at half the power.
There’s also a new image signal processor that provides faster autofocus in low light and better pixel processing, plus hardware-enabled noise reduction.

For better photos, video, and augmented reality, Apple also improved the cameras in the iPhone 8 and 8 Plus. The rear-facing camera in the iPhone 8 is still 12 megapixels, but it sports a new sensor that features deeper pixels, a new color filter, and optical image stabilization. It captures 83 percent more light and is more power efficient too. All that adds up to better color saturation, a wider dynamic range, and lower noise than the previous models. As we’ve noted previously, the camera captures photos in HEIF and JPEG (see “HEVC and HEIF Will Make Video and Photos More Efficient,” 30 June 2017).

In the iPhone 8 Plus, there are once again dual cameras, both at 12 megapixels. One has an f/1.8 aperture, and the other is f/2.8. Again, those are the same basic numbers as the iPhone 7 Plus, but with the new sensors. Portrait mode sticks around and has received some enhancements, but new (and in beta) is Portrait Lighting, which lets you change the lighting of your shot in real-time as you compose the shot. You can even tweak the lighting afterward. These features show that computational photography is where the photography world is going. 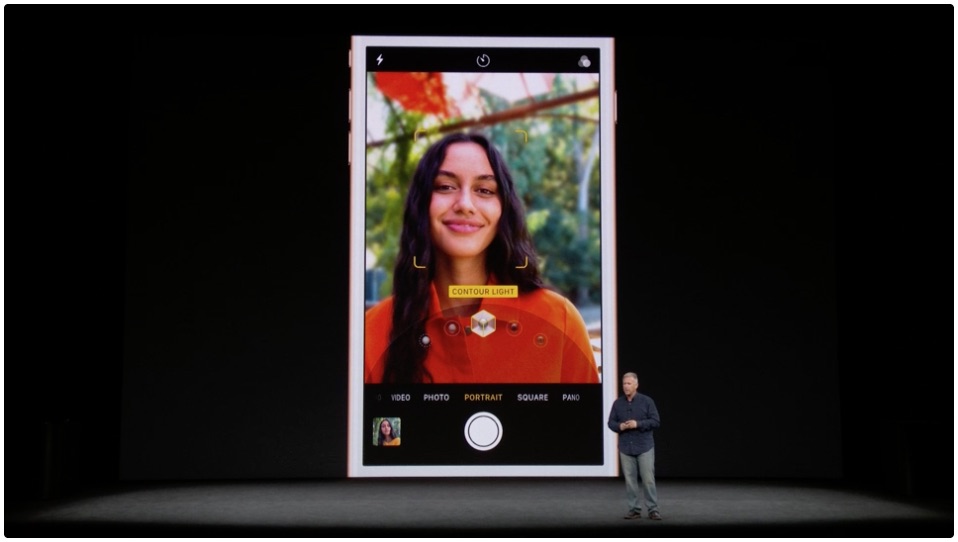 Video capture on the iPhone 8 and 8 Plus is also notably improved thanks to an Apple-designed video encoder. You can now shoot 4K video at 24, 30, or 60 frames per second, whereas the iPhone 7 could do only 24 fps. Slo-mo video supports 1080p resolution at 120 fps or 240 fps, again besting the iPhone 7, which could only provide 120 fps. Video is captured using HEVC and H.264.

In terms of other specs, the iPhone 8 is basically the same as the iPhone 7, with the exception of Bluetooth 5.0 instead of 4.2. Apple’s tech specs page also notes that the iPhone 8 supports “NFC with reader mode” whereas the iPhone 7’s page just said “NFC.” We don’t yet know if there’s a technical difference behind the wording change.

Both come with Lightning-based EarPods, a Lightning to USB cable, a 5 watt USB power adapter, and — still! — a Lightning to 3.5 mm headphone jack adapter if you want to use standard headphones. And, of course, they’ll run iOS 11.

iPhone X — After the announcement of the iPhone 8, Tim Cook returned to the stage for Apple’s classic One More Thing™ — the much-rumored iPhone X.

Although it shares a few industrial design features with the iPhone 8, such as the glass back that enables Qi wireless charging, the iPhone X boasts an edge-to-edge screen that fills almost the entire front face, dropping the iconic Home button entirely. Its metal edges are surgical-grade stainless steel, and it comes in just two colors: silver and space gray. 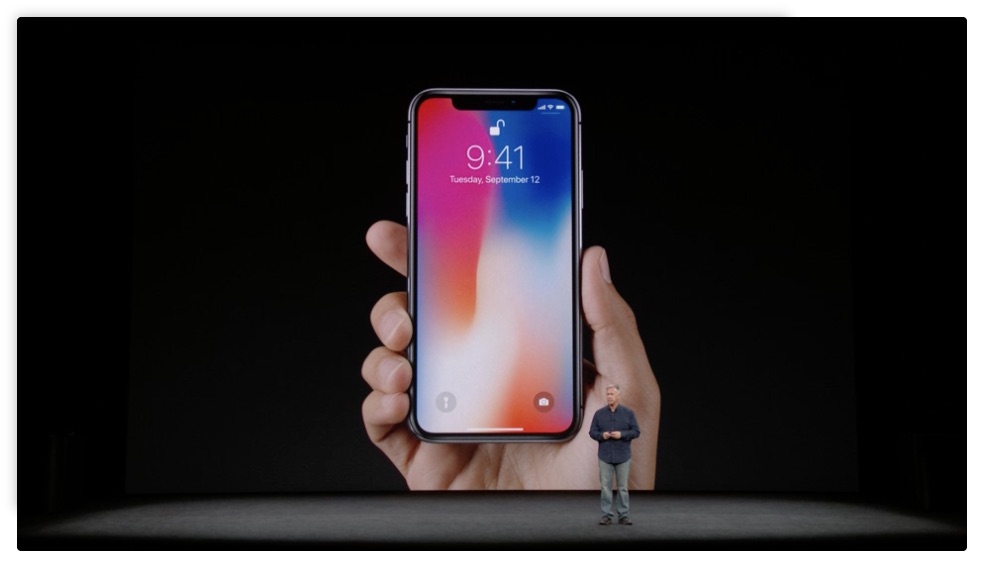 The iPhone X’s Super Retina display also has way more pixels — 2436-by-1125 at 458 pixels per inch — than any previous iPhone. In comparison, the iPhone 8 Plus is only 1920-by-1080 at 401 ppi. That means you’ll see quite a bit more detail on the iPhone X than you would on even Apple’s previous Plus models.

Some of these changes were made possible via the switch to OLED — organic light-emitting diode — technology. Historically, OLED screens have provided great contrast, high resolution, and minimal thickness due to not needing a backlight, but they have had trouble with brightness, wide color support, and color accuracy. Apple claims to have resolved these problems, so the iPhone X display supports high dynamic range video in both the Dolby Vision and HDR10 formats and offers a 1,000,000 to 1 contrast ratio. It also supports 3D Touch and True Tone.

But without a Home button, how do you wake an iPhone X? Raise to Wake still works, or you can just tap the screen. What about Siri? Press the iPhone X’s new side button, much like on an Apple Watch, or just use “Hey, Siri.” To unlock the iPhone X, you just swipe up from the bottom of the screen while looking at the iPhone X, and it uses Apple’s new Face ID technology to recognize your face, much like Touch ID did with your fingerprint in the past. Apple said nothing about whether the iPhone X could learn multiple faces as previous iPhones could learn multiple fingers, but entering a passcode remains an option for families who often share devices.

Face ID relies on both the A11 Bionic’s neural engine and what Apple calls the TrueDepth front-facing camera system — that notch on the top of the iPhone X — which includes a 7-megapixel camera, infrared camera, flood illuminator, and dot projector, along with the proximity sensor, ambient light sensor, speaker, and microphone. Face ID works in the dark, and although you train it quickly on initial setup, it continually adapts to your changing look, so it can handle glasses, hats, beards, and more, all without being fooled by photos. 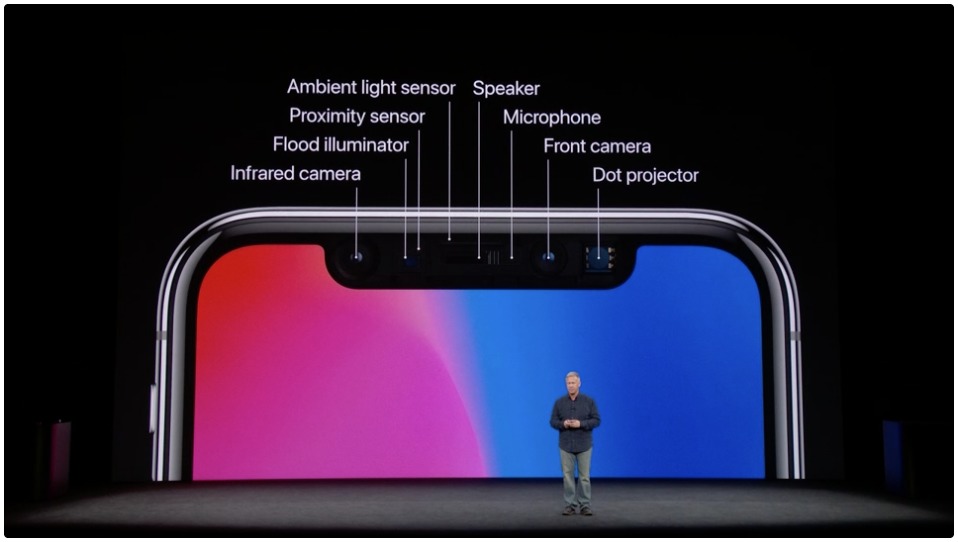 It almost seemed as though Apple had read Rich Mogull’s “Preparing for a Possible Apple “Face ID” Technology” (18 August 2017) because the company noted that Touch ID has a 1 in 50,000 false positive rate, but Face ID should be more like 1 in 1,000,000. That said, Apple did admit that Face ID might not stop evil twins (whereas Touch ID would, since identical twins do not have
identical fingerprints). Also, apps that work with Touch ID, like 1Password, will work with Face ID.

Swiping up from the bottom of the iPhone X screen works across the system for jumping back to the Home screen or (if you pause briefly) opening the app switcher. You can also swipe left and right on the bottom area to switch between apps. The main oddity is that you now get to Control Center by swiping down from the top-right corner of the screen (to the right of the notch). To access the Lock screen, which replaces the Notification Center in iOS 11, you now swipe down on the upper-left of the screen (to the left of the notch).

Apple uses the iPhone X’s facial recognition technology in a few other ways, including a demo of an upcoming version of Snapchat that could affix a virtual mask to your face in real time. And you can create “animoji” — a dozen different animated emoji characters whose faces mimic what you do with your face while recording in Messages. Technically impressive, but it brings new meaning to that long-ago option in Eudora: “Waste cycles drawing trendy 3D junk.” 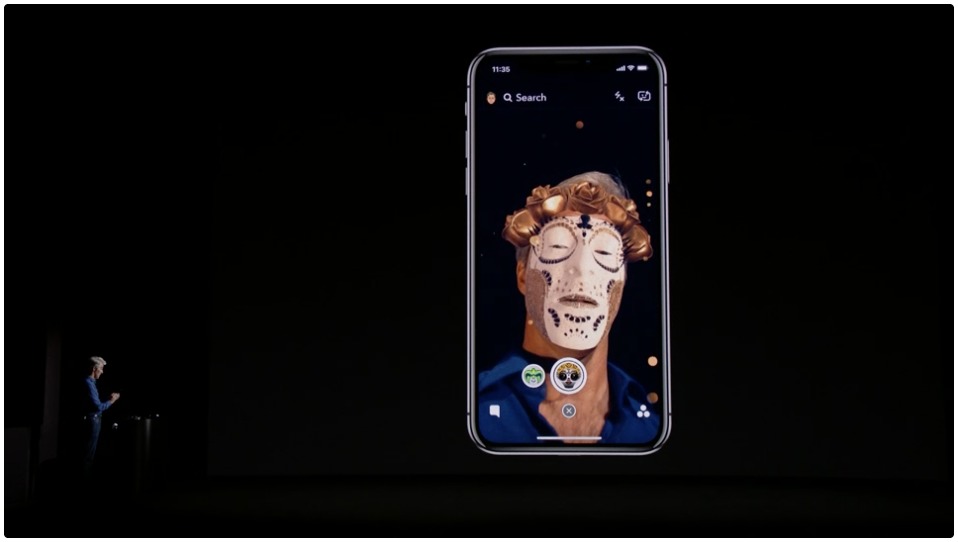 The iPhone X sports a pair of cameras, much like the iPhone 8 Plus, but has slightly different specs. One has an f/1.8 aperture, but the other is f/2.4, as opposed to f/2.8 on the iPhone 8 Plus, and lets in 36 percent more light. It also sports optical stabilization (on both lenses) for better low-light photos and videos. Apple says its quad-LED True Tone flash delivers twice the uniformity of light. 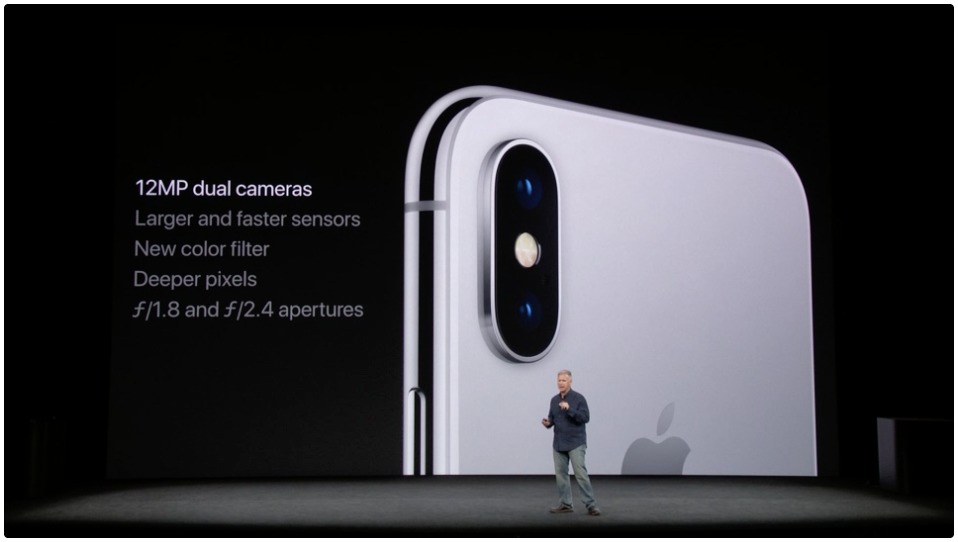 As with the iPhone 8, the iPhone X will be available in two capacities — 64 GB for $999 and 256 GB for $1149. Interestingly, unlike the iPhone 8, you cannot buy a SIM-free iPhone X that can work with any carrier; you must select from AT&T, Sprint, T-Mobile, or Verizon when ordering from Apple. Besides cases, the iPhone X accessories are the same as the iPhone 8, including the headphone adapter. You can pre-order an iPhone X on 27 October 2017 with availability on 3 November 2017.

If you’re in the market for a new iPhone, the question is, do you wait another 6 weeks and pay an extra $300 for the bigger display, Face ID, and other improvements? It’s tempting, of course, but since a lot of new technology debuts in the iPhone X, it’s also possible that it will be plagued with problems, particularly at first. Apple has historically done a pretty good job of addressing problems that seem like hardware issues with iOS updates, but you could still suffer through a month or two of awkward usage if Face ID doesn’t work well for you, for instance.

All that said, I’m getting one.

Comments About Apple Introduces iPhone 8, iPhone 8 Plus, and iPhone X