On 12 September 2017, Apple inaugurated the stage of the new glass-wrapped, wood-trimmed, and leather-seated Steve Jobs Theater in the company’s equally new Apple Park headquarters with a series of product announcements and demonstrations. 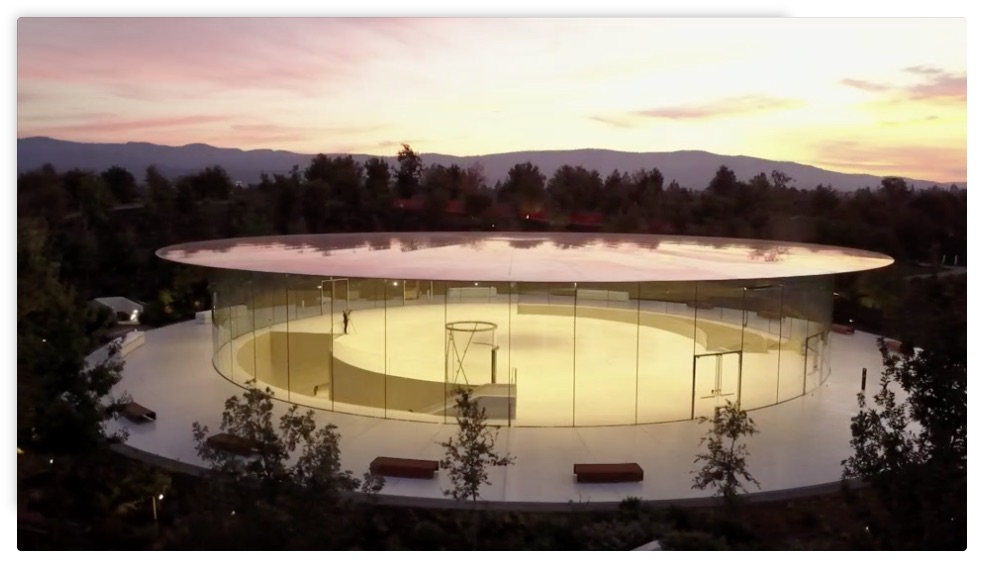 Preamble — Introduced to the strains of the Beatles’ “All You Need is Love,” the show began with a heartfelt tribute to Steve Jobs by his successor, Apple CEO Tim Cook. Then, riffing on the theme of love, Cook turned briefly to a matter of pressing current interest: disaster relief for the victims of the hurricanes that have afflicted Texas and Florida. In particular, Cook announced Apple’s participation in the Hand in Hand Hurricane Relief fund with a quick donation wizard and a plug for the televised Hand in Hand hurricane relief benefit concert.

Coming back to the new Apple Park, Cook recounted how the campus, which he characterized as Jobs’s last big creative project, converted a 175-acre “sea of asphalt” to a green space with over 9000 trees and a collection of eye-catching structures powered entirely by renewable energy. (Cupertino regulations required that it also have a minimum of 11,000 parking spaces, and two large parking structures and an underground garage provide spaces for 14,200 employees.) Cook tossed in a mention of Apple’s new focus on augmented reality (AR) by noting that the Apple Park would feature not only an Apple retail store but also a visitor center that employed an AR guide.

Even though the throngs of guests were by now hungering eagerly for the main course of product announcements, Cook further piqued their appetites by introducing Apple’s retail head, Angela Ahrendts, to discuss the future of the Apple stores. Over time, many of the stores are going to become “Apple Town Squares” (one would have thought “Round-Cornered Rectangles” would be more in keeping with Apple’s design sense) featuring “Genius Groves.” These new retail stores will be designed by the same team responsible for Apple Park as spaces for people (that is, Apple customers) to come together to share knowledge and experience. (Given the
typical noise level present in most Apple retail stores these days, one does wonder how much sharing can go on in that clamoring cacophony.)

Then, at long last, the new product announcements that everyone had come to hear took the stage.

Next on the playbill was a new Apple TV. Known as the Apple TV 4K, the black box mostly features 4K capability. Josh Centers provides a closer look in his article, “Apple Finally Enters the 4K Realm, but It Will Cost You” (12 September 2017). Although Apple said nothing about when the tvOS 11 software that drives the new device would become available, we anticipate that it will arrive on September 19th. The Apple TV 4K is available now for pre-order, with delivery on September 22nd, for $179 (32 GB) and $199 (64 GB). The older 32 GB fourth-generation Apple TV remains available for $149.

Following the Apple TV came the act that all had come to see: the iPhones! Not one new model, not two, but three — the iPhone 8, the iPhone 8 Plus, and the premium iPhone X. Here’s when you can get your hands on them and how much money you’ll spend to do so:

What about iOS 11, the software that drives Apple’s latest creations? You’ll be able to download it for free for older compatible devices on September 19th, just like watchOS 4.

Oh, and finally, although Apple said nothing about it during the event, the company subsequently posted information on its Web site stating that macOS 10.13 High Sierra would make its debut on September 25th.

Apple Watch Entertainment iPhone, iPad, & iOS Mac & macOS Tech News
Cookies & Privacy: We wish we were talking about chocolate-chip cookies here, but our Web site—like nearly all others—relies on a few minor digital cookies. Various laws around the world require us to tell you that fact, so consider yourself informed, if not nourished. By continuing to use this site, you agree to our use of these cookies. Cookie and Privacy Notice