Apple Watch fans, the rumors were spot on: the new Apple Watch Series 3 will indeed have built-in cellular capabilities for standalone Internet connectivity without an iPhone nearby. Or rather, one model will; you can still get a Series 3 that’s limited to GPS connectivity when it’s away from its paired iPhone.

Other hardware changes in the Series 3 include a faster dual-core processor, a barometric altimeter to measure relative elevation, and a garish red dot on the cellular model’s digital crown — if you don’t like it, you can cover it up with WatchDots. 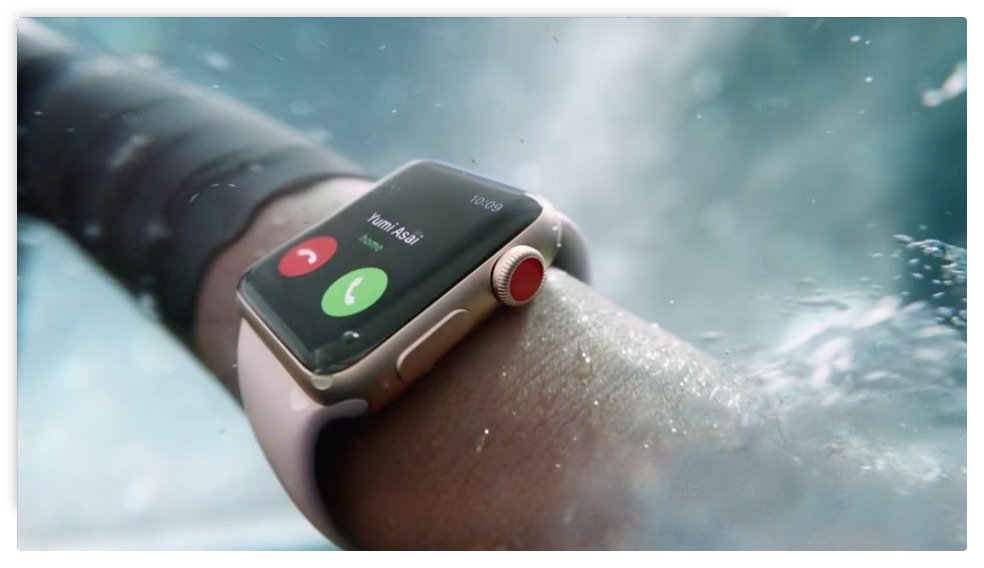 Software improvements are on tap as well. The new watchOS 4, due 19 September 2017, will bring with it an improved Heart Rate app and, for those with the cellular model of the Series 3, the option to stream the full Apple Music catalog right from your wrist — with no iPhone involved.

The capabilities of watchOS 4 have been well documented for the most part (see “watchOS 4 Focuses on Fun and Fundamentals,” 5 June 2017), but the new Heart Rate app is a surprise. Not only can it display your heart rate as a complication on the watch face, it can even warn you of an alarmingly high heart rate or the onset of atrial fibrillation (which we already knew it could do in theory, see “Apple Watch Can Detect Abnormal Heart Rhythms,” 12 May 2017).

More About Cellular — It’s no shock that Apple built cellular access into the Apple Watch Series 3 given that competing smartwatch makers have been doing so for a while now.

The details of Apple’s implementation are technologically impressive, though. To start, Apple combined the Series 3’s LTE and UMTS cellular radio with a display that doubles as an antenna, along with an “eSIM” that is about one-hundredth the size of a standard SIM card. Apple says that the watch can be activated over the air on its own.

For convenience, the Series 3 will use the same phone number as its iPhone companion, but it won’t be free. AppleInsider reports that AT&T, T-Mobile, and Verizon will all be charging $10 per month for watch connectivity after a three-month trial. In all cases, the data used by the Apple Watch comes from the same bucket as its associated iPhone. AT&T notes that the Series 3 can receive iMessage messages, but not SMS text messages.

The implication of Apple’s demo was that anything the Apple Watch can do via Bluetooth and Wi-Fi while connected to its iPhone, it can do while untethered via cellular: phone calls, messaging, Siri, calendar notifications, and more. Apple demoed making a live phone call to an Apple employee who was on a standup paddleboard in the middle of a large body of water — she managed to have a coherent conversation that sounded remarkably good, all without falling. 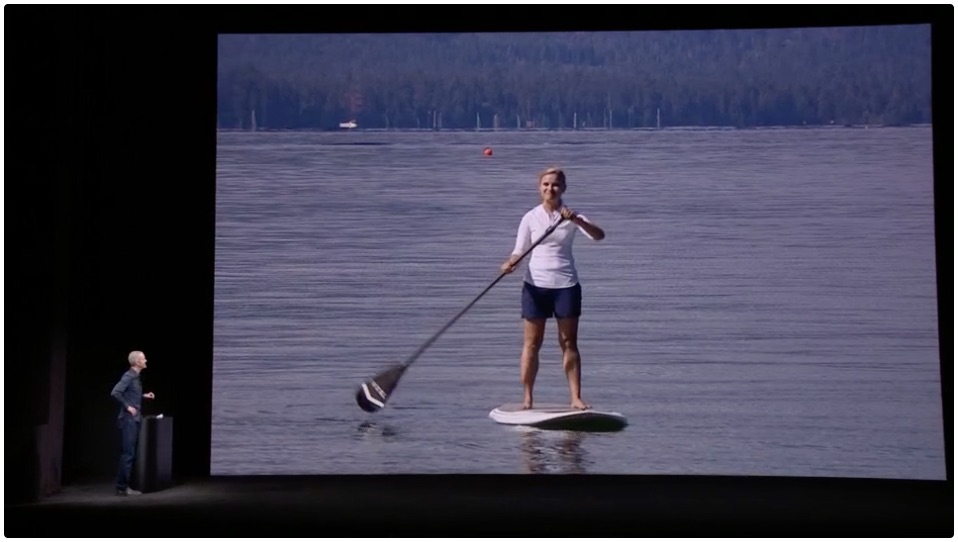 Third-Gen Hardware — The Series 3 watches boast a third-generation hardware architecture that includes that faster dual-core processor, which will allow for faster app launches and smoother graphics performance, both of which have been an issue for those with older models.

The new hardware allows for other enhancements. Siri can now speak, for instance, via a built-in speaker. And the Series 3 has an all-new W2 wireless chip to make Wi-Fi up to 85 percent speedier. Wi-Fi and Bluetooth power efficiency is 50 percent better, too. These hardware changes increase the Series 3’s size only marginally, making the back crystal slightly thicker.

That new barometric altimeter looks to come in handy for a wide variety of workouts, from running and bicycling to clambering up stairways. The sensor will register elevation gained and flights climbed during physical activity.

Despite the new cellular capabilities and new hardware, Apple claims to have maintained good battery life, promising up to 18 hours with mixed telecom uses, although a 1-hour phone call may drain it entirely. We’ll see how it performs in the real world, particularly in areas where cellular service is spotty, since searching for connectivity is notoriously power-draining.

Bands and Cases and Models, Oh My! — Although Apple has lately focused the Apple Watch on fitness rather than fashion, the company continues to tweak its look. There’s a new ceramic gray finish in the $1299 Apple Watch Edition Series 3, and the stainless steel Apple Watch Hermès Series 3 ranges from $1149 to $1399.

For the rest of us, Apple has introduced a variety of new bands, and there are new colors for the Apple Watch Nike+ Series 3. It’s all quite dizzying. 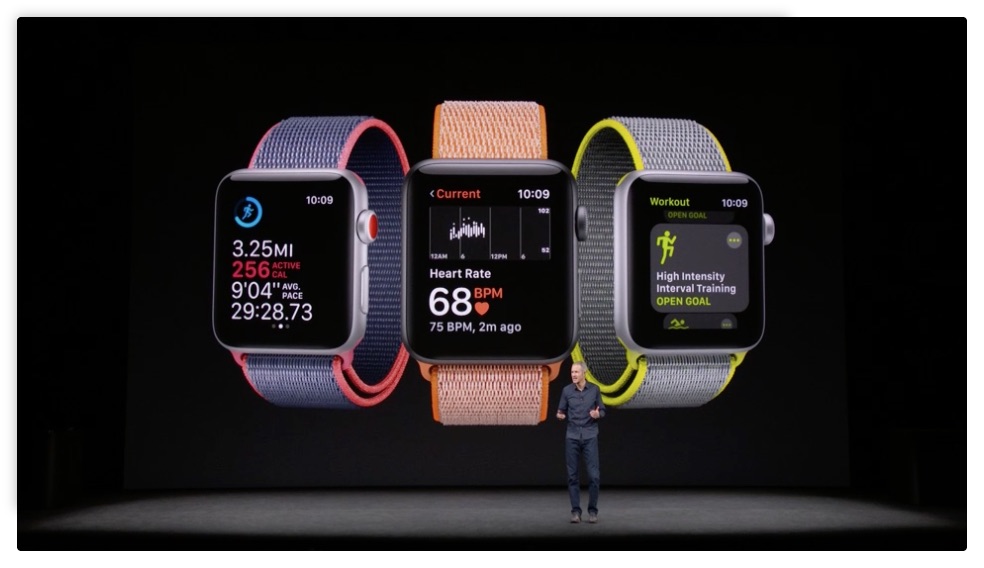 That said, you can buy an Apple Watch Series 3 without cellular capabilities for $329, or one that has them for $399. The Apple Watch Series 2 is gone, but the Series 1 remains in the lineup for $249. It has a slower processor, dimmer screen, and no standalone GPS capabilities. You can place an order for a new Series 3 now, and it becomes generally available on 22 September 2017.

Overall, the Apple Watch Series 3 looks to be a solid upgrade in both the cellular and non-cellular models. We can imagine someone upgrading from a Series 1 or Series 2 to the cellular Series 3, but the other Series 3 changes don’t seem significant enough to warrant replacing an older Apple Watch. For new buyers, though, the Series 3 offers compelling enhancements over the Series 1, which stays in the lineup as a low-cost option.

One final interesting fact: Apple claims that the Apple Watch is now the number one watch in the world, selling more than all products from Rolex, which posted revenues of $4.7 billion in 2016. Apple Watch revenues may not match up to those of the iPhone in Apple’s product mix, but it’s clearly doing well enough.