iOS 11 is now available, either via iTunes or Settings > General > Software Update. I’ve spent the last few months documenting it for “Take Control of iOS 11” — which we’ve updated to version 1.1 to coincide with the official iOS 11 launch.

Those articles hopefully whetted your appetite for iOS 11, but before you pull the trigger, here are 11 things you need to know.

#1: Your Favorite Apps May Not Work — Don’t say you haven’t been warned! Adam Engst suggested this might happen in “Apple to Deprecate 32-bit iOS Apps,” (15 May 2017) and Marc Zeedar told you it would in “The Problem With Abandoned Apps,” (17 July 2017): apps that have not been updated to run in 64-bit mode remain on your device, but you’ll receive an error message if you try to launch them.

If you’re running iOS 10.3.1 or later, check Settings > General > About > Applications to see a list of which apps on your device, if any, will not run under iOS 11. If you have some important ones on that list, see if there’s an update available, likely as a new app. If not, hold off on iOS 11 until you figure out a solution.

But you don’t have to worry about the TidBITS News app! Thanks to Matt Neuburg, it should keep working for years to come (see “TidBITS News Shows How an Old 32-bit iOS App Becomes 64-bit,” 16 May 2017).

#2: Some Features Are Missing — Three major features that Apple promised for iOS 11 at WWDC are missing: Messages in iCloud, person-to-person Apple Pay, and AirPlay 2 (see “iOS 11 Gets Smarter in Small Ways,” 5 June 2017).

The idea behind Messages in iCloud is that it will store your messages and attachments in iCloud (where is it storing them now?), making sync more reliable. The feature was present in earlier betas, but Apple removed it midway through the cycle for unspecified reasons. In internal beta-tester documents, Apple has vowed to bring it back later, but the company has said nothing to the general public.

Personally, I was skeptical of the feature, since it counted against your iCloud storage quota and attachments to conversation can get big. No other messaging service charges its customers for such basic functionality, and maybe someone at Apple realized that this was going too far.

Apple has also delayed person-to-person Apple Pay payments. The concept is that you can use an iMessage app to send money directly to another person via Apple Pay. Received money will be stored on a virtual Apple Pay Cash Card. It’s uncertain what the holdup is, but needless to say, financial products are complicated, so it’s not entirely surprising.

Apple confirmed the delay in a press release:

Coming this fall with an update to iOS 11 and watchOS 4, Apple Pay users will be able to send and receive money from friends and family quickly, easily and securely

Also, AirPlay 2 seems to be missing. Apple says AirPlay 2 will let you manage receivers with the Home app, output audio to multiple receivers, and work more reliably overall. However, based on my own testing, as well as AppleInsider’s, it doesn’t seem to be implemented yet. Strangely, Apple mentions AirPlay 2 in the developer release notes for tvOS 11. Perhaps it’s implemented in tvOS, but not iOS? I suspect we’ll learn more whenever Apple launches the HomePod smart speaker.

We’re as frustrated by the delay of these features as you are, and I’ll update “Take Control of iOS 11” as soon as they’re available.

#3: Be Wary of New Video and Photo Formats — By default, iOS 11 will capture videos and photos in the new HEVC and HEIF formats — assuming your device has an A10 Fusion chip or better. That means the iPhone 7 and later, and the 2017 iPad Pro models. As Glenn Fleishman explained in “HEVC and HEIF Will Make Video and Photos More Efficient” (30 June 2017), these formats provide a host of advantages, most notably reduced file sizes, but they have one big disadvantage: a general lack of compatibility
throughout the industry!

Windows computers can’t read these formats yet. Nor can Apple products running operating systems before iOS 11 and macOS 10.13 High Sierra. Images I’ve captured in HEIF on iOS 11 can’t be viewed at full resolution when synced to my 10.12 Sierra-based Mac via iCloud Photo Library.

Apart from iCloud Photo Library, this shouldn’t be a major issue because exporting from Photos in iOS 11 and High Sierra generates files in standard formats. And if it is a problem, you can still capture images and videos in the JPEG and H.264 formats in iOS 11 by going to Settings > Camera > Formats and selecting Most Compatible.

#4: Control Center Is Crazy — One of the biggest shocks after installing iOS 11 will probably be the new Control Center. It’s totally bonkers! It’s so different that I dedicate an entire chapter of “Take Control of iOS 11” to it. I don’t have the space to repeat it all here, but here are some quick tips and notes: 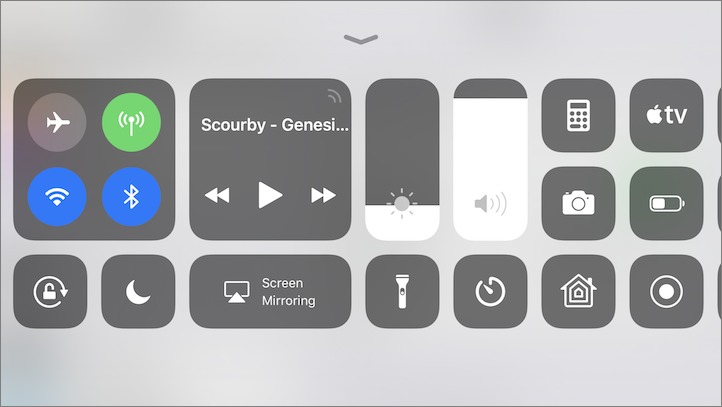 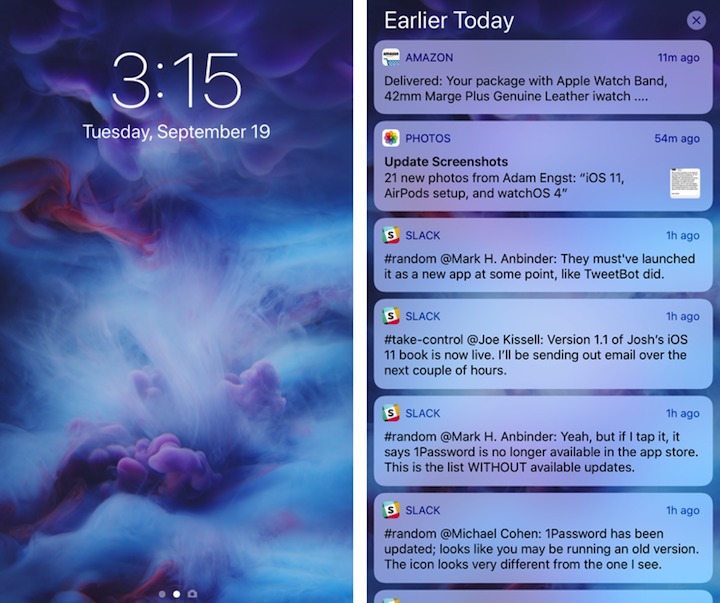 The star of the new multitasking approach is the redesigned Dock, which looks and works more like the Mac Dock. It can hold up to 15 apps and has a section to the right which displays recent and frequently used apps. That’s also where Handoff apps now appear on the iPad.

You can invoke Slide Over or Split View in several ways, but it comes down to dragging one app from the Dock or Home screen onto another active app. So you can:

If you drop the dragged app on the main window while it’s showing its vertical lozenge, it opens in Slide Over, which overlays the main app on the right side of the screen. Convert a Slide Over app to Split View by dragging up on the bar at the top of its window. 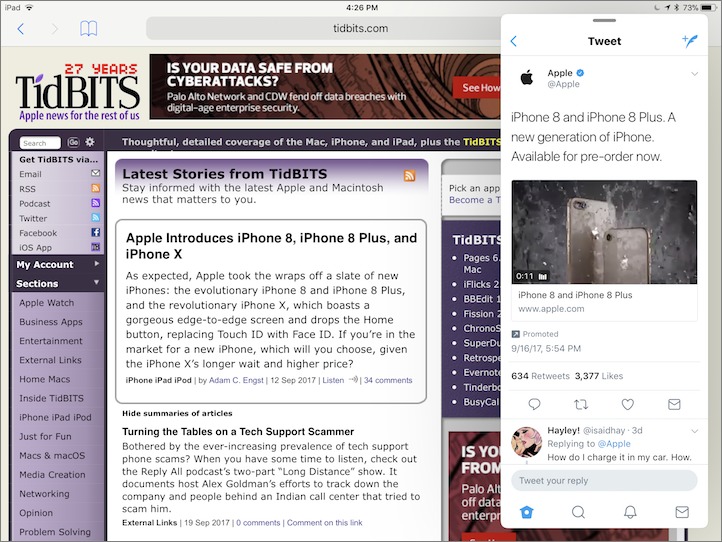 However, if you keep dragging that lozenge to either the left or right edge of the screen, the view changes to indicate that dropping it will open in Split View. It’s great that you can now position the new app on either side. 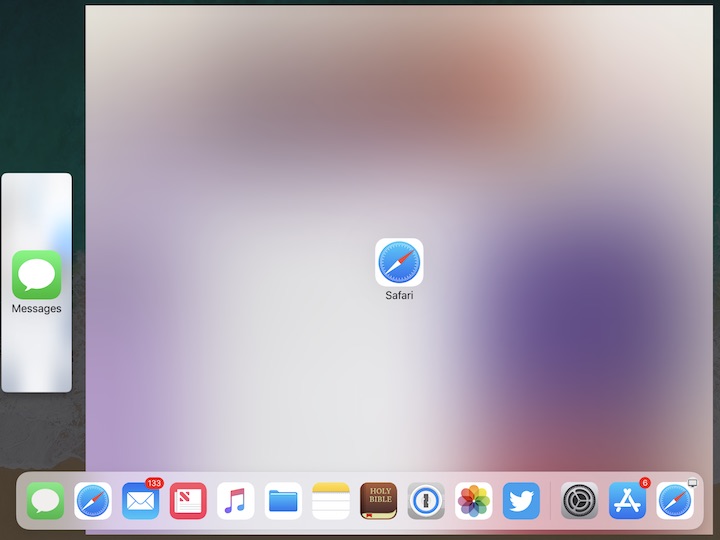 There’s so much going on with the iPad in iOS 11 that I dedicated a full chapter of “Take Control of iOS 11” to it.

#7: Instant Notes — If you have an iPad Pro running iOS 11, you can tap the Lock screen with an Apple Pencil to create a new note in the Notes app (the screen must be awake, and I’ve found a second tap is sometimes necessary).

However, you don’t need an iPad Pro and Apple Pencil to make an Instant Note. If you add the Notes button to Control Center on any iOS device, you can tap that button to create an Instant Note when your device is locked!

You can adjust Instant Notes’ behavior in Settings > Notes > Access Notes from Lock Screen. The default is Always Create New Note, but you can also set it to resume the last note you worked on, which would be handy if you’re taking notes in a meeting or class.

#8: Explaining Instant Markup — Every year, Apple introduces some vague set of features under a single marketing term, which I have to figure out how to explain. Instant Markup is this year’s entry.

The iOS 11 release notes imply that Instant Markup means that if you tap an Apple Pencil to an iPad Pro, you can mark up whatever is on screen. That’s not true, and again, you don’t need an Apple Pencil.

Instead, Instant Markup features are sprinkled throughout iOS 11. Here are a few examples: 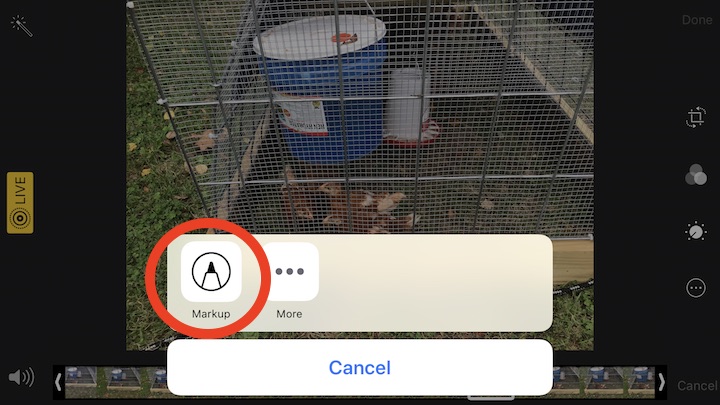 Don’t get me wrong — it’s great that this functionality is available throughout iOS now. It’s just that Apple’s marketing is a bit misleading, and how you access it is inconsistent.

#9: Emergency SOS — This new iPhone-only feature is important, but be careful with it. Press the Sleep/Wake button five times in rapid succession. You should see three sliders: Slide to Power Off, Medical ID, and Emergency SOS. Don’t touch the Emergency SOS slider until you’ve finished reading this section!

First, just by accessing that screen, you have deactivated Touch ID (and presumably Face ID on the upcoming iPhone X). In many jurisdictions, the law says you can be compelled to unlock a device with a fingerprint but not a passcode. Keep that in mind, but remember that law enforcement and border guards can make your life miserable if you refuse to provide a passcode (see “Getting Your Devices and Data Over the U.S. Border,” 14 April 2017).

As you expect, the Slide to Power Off slider shuts your iPhone off, and the Medical ID slider displays your Medical ID, which you can configure in the Health app, in the Medical ID view.

What does that scary red Emergency SOS slider do? First, it calls emergency services — 911 in the United States. After the call is completed or cancelled, it sends a text message to your emergency contacts and shares your location with them. 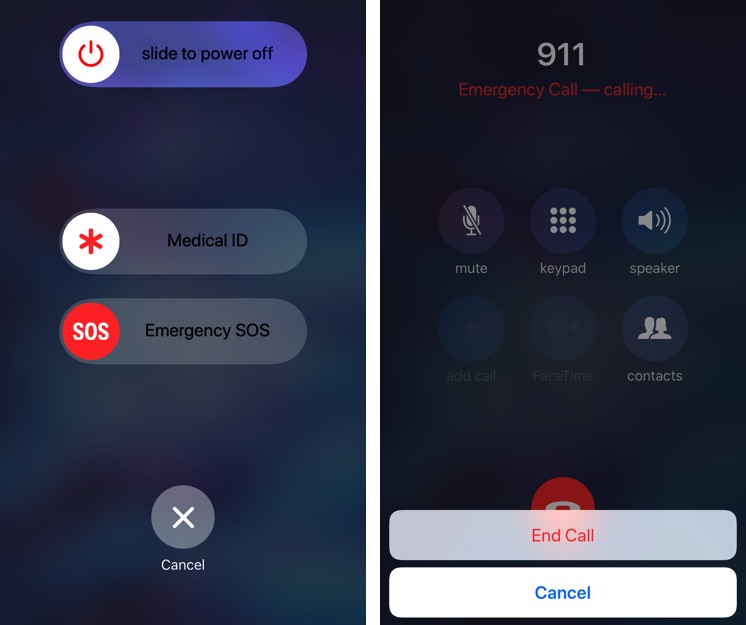 Here’s the message it sends on my iPhone 7 Plus. There doesn’t appear to be any way of modifying it:

Emergency SOS
Josh Centers has made an emergency call. You are receiving this message because Josh has listed you as an emergency contact.

You set up your emergency contacts in Settings > Emergency SOS.

After it notifies your emergency contacts, it displays your Medical ID, presumably to help any emergency responders.

Remember: five quick presses of the Sleep/Wake button could save your bacon. It’s worth trying it to make sure you know what’s involved, but don’t slide that Emergency SOS button unless it’s a real emergency. We hope the feature doesn’t cause too many errant calls.

#10: Offload Apps — Apple has long been stingy with storage space on iOS devices, and it has always been difficult to manage storage in iOS. iOS 11 improves the situation, thanks to a new storage management screen, which you can find in Settings > General > iPhone (or iPad) Storage. It offers suggestions for various things you can do or enable to save space.

But I want to point out a specific new setting, which can also be found in Settings > iTunes & App Stores: Offload Unused Apps. This setting automatically uninstalls unused apps, but retains their data. If you later reinstall the app from the App Store, it’s as though you never deleted it!

The only reason not to enable this setting is if you have way more storage space than you’ll ever use. For the rest of us, it can free up space with no risk of data loss.

#11: Quick Start — It’s new iPhone season, and while setup isn’t a great hardship, it is the most time-consuming part of getting a new iPhone. For years, you’ve been able to set up an Apple TV automatically by placing an iOS device near it. Now you can finally set up iOS 11 devices the same way!

So, if you have a new iPhone 8 on the way, for instance, I highly recommend upgrading your existing iPhone to iOS 11 before it arrives. Then, when you set up your new iPhone, you’ll save yourself from entering Apple ID credentials, Wi-Fi passwords, and the like. Just follow the onscreen prompts at setup or check out the What’s New chapter of “Take Control of iOS 11” for instructions. 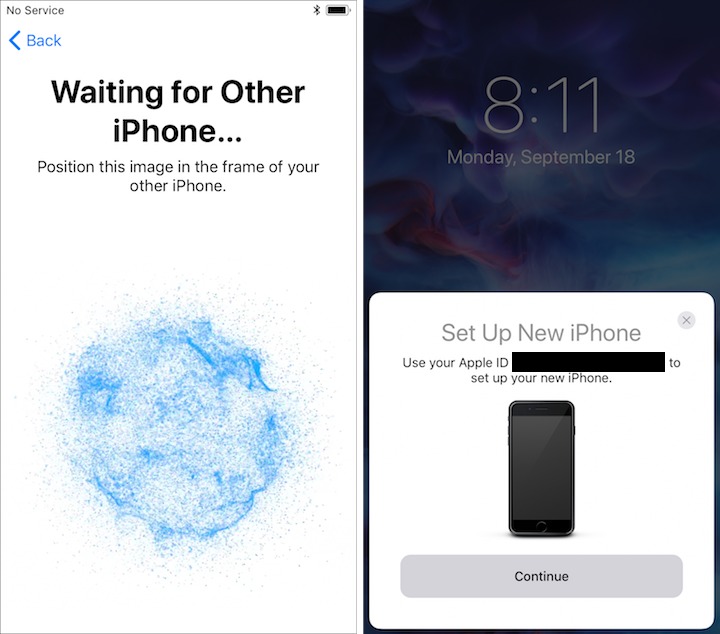 I hope you found these tips and highlights helpful, and check out “Take Control of iOS 11” for even more iOS advice!

Comments About 11 Things You Should Know about iOS 11