After ballooning to as many as three screens in iOS 10, Apple shrunk iOS 11’s new Control Center into a much-reduced space. But the way in which it has changed iOS’s networking behavior may baffle the average user. Heck, it baffled me! However, with hands-on testing and the help of colleagues, I’ve untangled the mess and can now explain it to you.

Before iOS 11, the Control Center offered four network-related buttons: Airplane Mode, Wi-Fi, Bluetooth, and AirPlay. In iOS 11, the four buttons shown in a two-by-two square by default include the first three, but swap Cellular Data for AirPlay. That’s straightforward, right? You can tap any of those buttons to toggle its state. But toggle it to what? I’ll explain that in a moment.

You can also press and hold down on the networking platter to expand it to six buttons, adding AirDrop and Personal Hotspot; it also provides nifty explanatory text below each. So far, so good.

Airplane Mode continues to work exactly as it did: tapping its button in Control Center or enabling it via Settings turns off all the radios — cellular, Wi-Fi, and Bluetooth — a desirable state when you want to ensure that your device has no radio-wave interaction with the world around it. (You can still re-enable just Wi-Fi and Bluetooth in Airplane Mode so you can use in-flight Wi-Fi and your Bluetooth headset.)

What this new user interface hides is that toggling the Control Center buttons for Wi-Fi and Bluetooth no longer produces the old On/Off action you might expect. Nonetheless, the new approach is an improvement, and Personal Hotspot appears to work similarly.

A State of Mild Confusion — Instead of just On and Off for Wi-Fi and Bluetooth, the radios now have three states. I’d describe them as:

How does Not Connected differ from Off? It all relates to how much Apple now relies on the continuous availability of Bluetooth and Wi-Fi for communication among iOS, macOS, tvOS, watchOS, and even the Apple Pencil.

The Off state makes the radio entirely unavailable, just as though it had a physical switch. Depending on the particular technology and whether you disable both Wi-Fi and Bluetooth or just one, you won’t be able to use some combination of AirDrop, AirPlay, Handoff, Instant Hotspot, and Location Services. Plus, an iPhone won’t be able to communicate with an Apple Watch, and an iPad Pro won’t be able to talk to an Apple Pencil.

Because Control Center makes it so easy to flip Wi-Fi and Bluetooth from On to Off with a tap, it becomes all too easy to disrupt Apple networking services you’re actively using. Even with decades of networking experience under my belt, when I want to disconnect from a Wi-Fi network without using the Forget This Network option in the Settings app, I’ll often tap the Wi-Fi button without remembering that action breaks Handoff.

If you’re Apple, how do you let people disconnect from a network or peripheral, but still keep using other background network services you provide?

The Settings app’s sections for Wi-Fi and Bluetooth each still have a binary On/Off switch that turns off the associated radios, just as in earlier iOS releases. However, in Control Center, you can now toggle through three different states with Wi-Fi and Bluetooth:

So here’s the detail that will confuse you unless you have absorbed Apple’s support page for Bluetooth and Wi-Fi in iOS 11: the Not Connected state doesn’t persist indefinitely. In the cases I outline below, iOS flips it back to the On state automatically, without your intervention:

Again, you can manually flip the state back to On by using Settings > Wi-Fi or Settings > Bluetooth to connect to a Wi-Fi network or a Bluetooth peripheral.

Personal Hotspot’s New Modes Fit It Better — Personal Hotspot works a little differently because it’s not a radio mode. It has three nominal states as well, although I can’t discern any difference between Not Discoverable and Off. 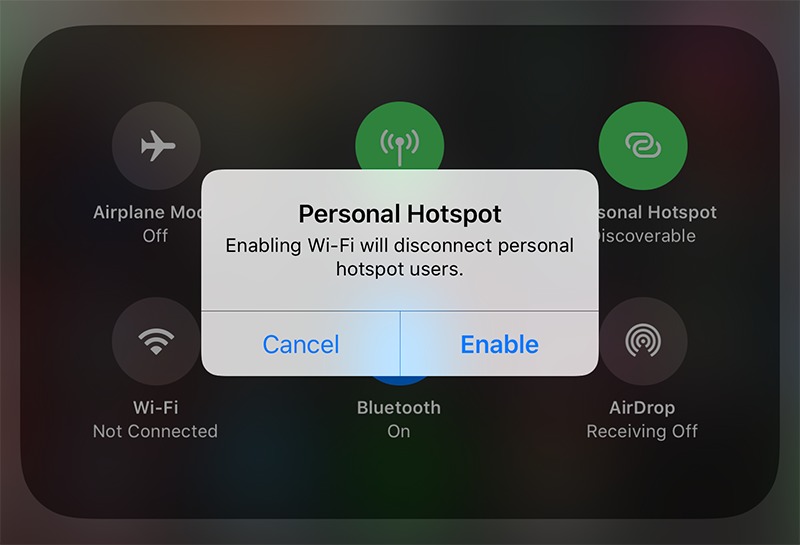 Could Apple Present This Better? — Heck, yeah! Representing three states with an On/Off switch in Settings and Control Center’s multi-state button is not the crispest way to help users achieve their goals. Apple should redesign both areas: 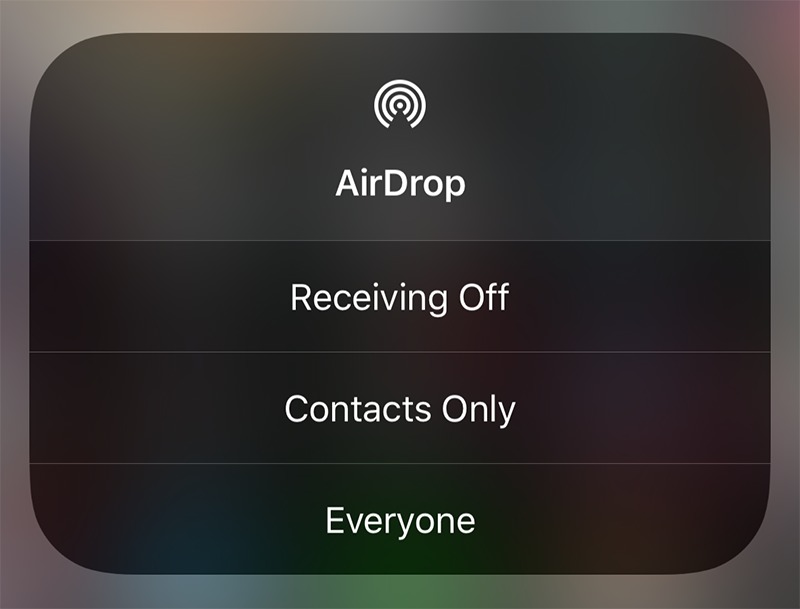 These suggested changes wouldn’t increase complexity because most people seldom interact with Wi-Fi and Bluetooth settings. The changes are also subtle enough that they wouldn’t confuse users who are becoming accustomed to this new behavior today — or who can’t figure it out at all. Regardless, updating iOS’s interface in this way would help show off the continuous wireless local and personal area network connectivity that makes Apple’s devices work so well together.

Comments About Control Center’s New Networking States: On, Off, and In Between