tvOS 11 is here, but if you read my article “What’s Coming in tvOS 11” (15 June 2017), you probably haven’t been champing at the bit for it. It’s the least consequential major software update I can remember from Apple, but you should install it regardless for continued software support, plus a few welcome improvements. So if you haven’t already, navigate to Settings > System > Software Updates > Update Software to upgrade to tvOS 11.

As an indication of how minor tvOS 11 is, you probably won’t notice anything different after you install it! So let me point out what’s new. But first, I should explain our stars.

With free operating system upgrades, particularly those you can’t (or shouldn’t) avoid getting due to necessary security improvements, the utility of a review is to help set reader expectations — there’s no buying decision to make. According to Apple’s marketing team, everything the company does is fabulous. But in the real world, we all know that some features, and some operating system versions, are better than others.

So we’re going to do a little evaluation in this article and others, both of individual features and the release as a whole. As with our reader surveys, we’ll use a five-point scale, which we’ll translate into stars embedded in the title and headings:

Automatic Appearance Switching ⭐⭐⭐ — The original color scheme for tvOS was Jony Ive Blinding White, a white so bright, so intense, that it would burn your eyes if you stared into it for more than a few seconds. (Another use for eclipse glasses!) But thanks to what must have been a legendary battle among Apple’s design team, our scorched retinas were granted the reprieve of a dark mode in tvOS 10 (see “tvOS 10 Adds Dark Mode and More,” 13 September 2016). Those of us who could still see immediately switched to it.

In tvOS 11, you can automatically switch between dark and light modes based on the time of day. Visit Settings > General > Appearance and select Automatic.

One Home Screen (To rule them all?) ⭐⭐⭐ — There has been no way to back up or sync an Apple TV, should you get a new one, have more than one, or need to reset it entirely. tvOS 11 moves in that direction with the new One Home Screen feature, which syncs your Home screen between Apple TVs via iCloud.

I can’t test this feature, since like 99 percent of Apple TV owners, I have only a single tvOS-equipped Apple TV, but if it works as advertised, it might encourage users to purchase additional units for other rooms that are also outfitted with TVs.

Right-to-Left Language Support ⭐⭐⭐⭐⭐ — Here’s another new tvOS 11 feature I can’t test properly, limited as my brain currently is to languages that are written left-to-right. However, if you prefer to use your devices in a right-to-left language like Arabic or Hebrew, you now can.

I set my Apple TV to Hebrew to try it out. Interestingly, it flips the entire interface around! Hebrew support is sort of haphazard — some parts of the interface were in Hebrew, but most of it was still English. The YouTube app was largely Hebrew, but Netflix was all English. 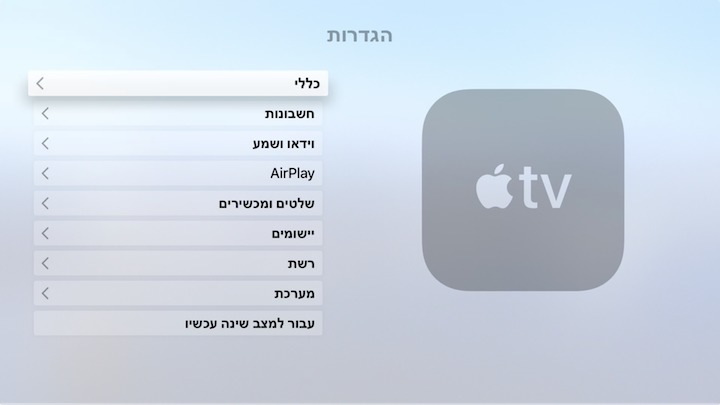 AirPlay and AirPlay 2 ⭐⭐⭐⭐ — AirPlay 2, which is a core technology in the upcoming HomePod smart speaker, promises to improve multi-output audio streaming, make streaming more reliable, and reduce the severity of the common cold. But I’m not entirely sure if Apple has turned it on in tvOS 11 or not. The tvOS release notes for developers indicate that it is indeed part of tvOS 11, so I’m inclined to think that it’s there, but just not yet available to the user.

That probably doesn’t matter to you. But what is interesting, and leads me to think that AirPlay 2 is there in some capacity, is that you can now AirPlay content to an Apple TV without being on the same Wi-Fi network. Go to Settings > AirPlay > AirPlay. The default is now Everyone, and there’s now an onscreen code displayed on the Apple TV that you must enter on the transmitting device the first time you send something to that Apple TV.

If you leave Everyone enabled, you must enable security for AirPlay, which you can modify under Settings > AirPlay > AirPlay > Require Code. If you dislike having to input a code to use AirPlay, change Everyone to Anyone on the Same Network and then change Require Code to Never.

The fact that now anyone within Wi-Fi range of an Apple TV can AirPlay to it is fascinating and may have larger consequences. It certainly makes the Apple TV more attractive for classrooms and conference rooms, but is something IT admins will want to evaluate.

AirPods ⭐⭐⭐⭐ — tvOS 11 finally supports AirPods properly. Thanks for getting around to that, Apple. Technically, they worked with tvOS before, but you had to connect them manually, like an animal. Now you can connect your AirPods just by selecting them in Settings > Audio and Video > Audio Output, assuming all of your iCloud stuff is set up properly.

Here’s an interesting quirk. If your AirPods are connected to the Apple TV, but in their case, audio will play back over the speakers as usual. However, if you flip the charging case open, audio immediately shifts to the AirPods. That’s kind of annoying, since it shouldn’t shift until you stick an AirPod in your ear. However, this fact is handy to know if you need to silence audio quickly, or if you’re wondering why your audio keeps cutting out. Don’t open and close the case repeatedly, because that can make the Apple TV go bonkers — the Netflix app grew angry with me and stopped video playback altogether.

Support for AirPods is an improvement, but digging through Settings isn’t convenient. tvOS needs its own Control Center.

Video Playback ⭐⭐⭐ — tvOS 11 introduces a couple of subtle video playback tweaks, both involving two taps on the Siri Remote’s touchpad. Those are taps, not presses! These tricks don’t work in the iOS remote apps.

While watching a video, tap the touchpad once to see the progress bar, which shows how far you are into the video and how much time is left. That’s not new, but what is new is how with a second tap (not too fast), those times will switch to the current time of day, and the time of day when the video will end — for instance, 8:32 PM and 8:34 PM, as in the screenshot below. This neat little feature helps you tell if you have time to finish your movie or not!

For the next trick, double-tap (quickly!) the touchpad while watching 4:3 content to zoom it to fit the width of the screen. That sounds helpful, but I don’t care for this zoom at all, since it makes video look worse, and it cuts off the top and bottom of the image. I worry that a lot of people will zoom by accident and have no idea how or what happened.

Music ⭐⭐⭐ — There isn’t much new in the Music app. If you subscribe to Apple Music, your Chill Mix playlist is now available in the For You screen. Also in For You is the new social music feature of Apple Music. If you enable this feature, you’ll see music that your friends are listening to, whether or not they have any taste. Click your profile picture in the upper-right corner to view your public profile.

This is Apple’s 17th swing at building some sort of social networking into music. Place your bets on how long users have to ignore it before Apple removes it.

TV App ⭐⭐ — The TV app, the little app that wants to be your Home screen if only Netflix would support it, sees no change in tvOS 11 at the moment. However, it now lacks Netflix for Apple TV users in Canada and Australia, and it will lack Netflix for those in France, Germany, Norway, Sweden, and the UK by the end of the year. Still, lacking Netflix is a step up from not being available at all in those countries, I suppose.

Apple has promised live news and sports features for the TV app, but those aren’t in evidence yet. Expect them before the end of the year.

Expanded Single Sign-On Support ⭐⭐⭐⭐⭐ — Single Sign-On isn’t a new feature, but I want to applaud Apple for expanding support for it — it now even includes my obscure rural Tennessee TV company! To check for yours, go to Settings > Accounts > TV Provider.

Unfortunately, I don’t pay for a high enough tier of TV access to get access to many streaming apps. To see which ones you can use, on the aforementioned TV Provider screen, choose Find More Apps. It will show you all the apps included with your TV subscription, and all the apps that would be available if you stopped being such a cheapskate and upgraded your subscription. 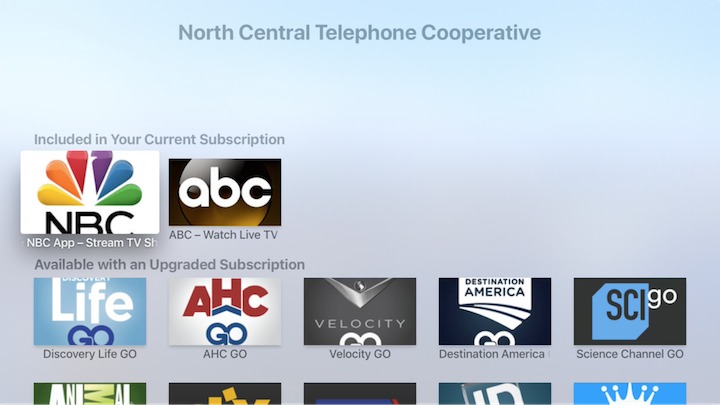 Here’s a quick Single Sign-On tip. Once you’ve signed in, you may still see lock icons on content in supported apps. Ignore them. Just play the content anyway, and it should authenticate with your saved login.

iOS 11 Control Center Remote ⭐⭐⭐⭐⭐ — The best new Apple TV feature isn’t in tvOS 11, but iOS 11. The new customizable Control Center features a built-in Apple TV remote! No more fishing for that slippery little Siri Remote or hunting for the Remote app. Just pull up Control Center from the Lock screen and you have full control over your Apple TV.

iOS 11 doesn’t include the Apple TV Remote button by default, so you’ll have to add it in Settings > Control Center > Customize Controls.

Once you’ve done that, tap the Apple TV button in Control Center and use the onscreen remote that appears just like the Apple TV Remote app. As a bonus, it seems to connect more quickly than Apple’s remote apps did in iOS 10 and tvOS 10. 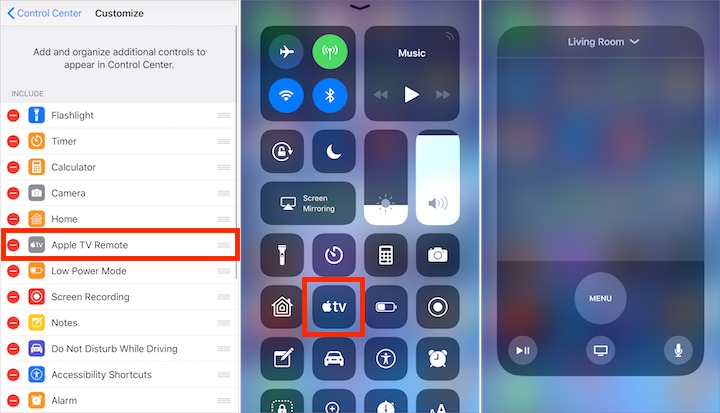 To be fair, I have yet to encounter any bugs. In fact, tvOS 11 could install itself and you probably would never even notice, which isn’t the worst thing in the world for an entertainment device.

Although I find the Apple TV 4K to be of questionable value for most people (see “Apple TV Finally Enters the 4K Realm, but It Will Cost You,” 12 September 2017), the tvOS 11 update improves the experience for existing fourth-generation Apple TV owners in small ways and is worth installing.

Comments About tvOS 11: The TidBITS Review ⭐⭐⭐