Apple has released watchOS 4.0.1, which fixes a reportedly rare bug that caused the Apple Watch Series 3 to join unauthenticated public Wi-Fi networks in coffee shops and hotels. Such networks require the user to submit a form on a Web page before the network can be accessed, and there’s no way to do that on an Apple Watch. 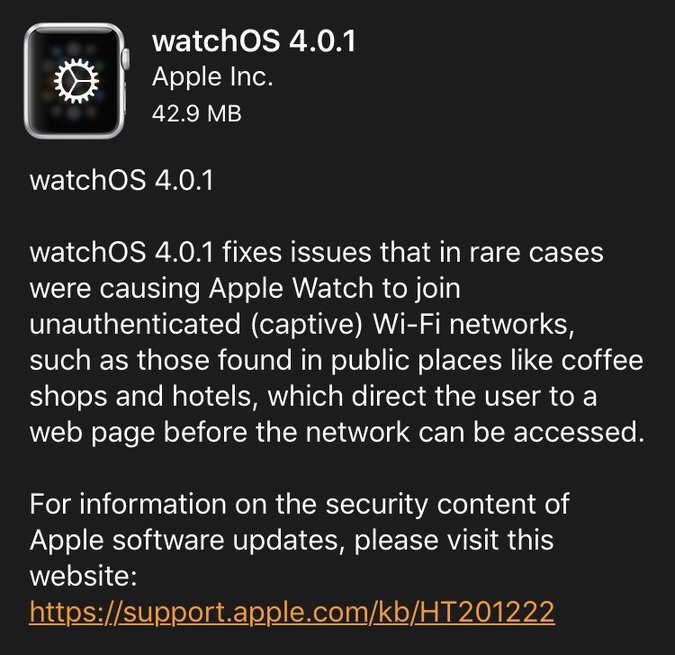 The real impact of this bug, however, is that Apple Watch Series 3 units were supposedly connecting to these public Wi-Fi networks instead of using the cellular connection. Since the Wi-Fi networks didn’t allow actual usage, the Apple Watch couldn’t get any Internet access.

Our Apple Watch Series 3 hasn’t arrived yet, so we can’t confirm that watchOS 4.0.1 resolves all the cellular connectivity issues reported in early reviews (see “Apple’s Late 2017 Collection: A Roundup of Reviews,” 26 September 2017).

However, we can confirm that watchOS 4.0.1 is available only for the Apple Watch Series 3 — it’s not appearing for earlier models. The update is a 42.9 MB download, and you can get to it in the Watch app on your iPhone, in General > Software Update. This one seems like a no-brainer to download immediately.