The longer an app has been around, the harder it is to update because there are only so many changes that make sense. That’s especially true for productivity apps that diehard users rely on all day, every day — it’s vital that changes avoid causing confusion. A major interface overhaul might be fun or seem necessary, but if it prevents users from getting their work done, even temporarily, it’s problematic.

Few apps have been around as long as Bare Bones Software’s BBEdit, which has been the best-known text editor on the Mac since it was first released in 1992. That history means that a great deal of thought went into the changes for last week’s release of BBEdit 12, the most significant update since BBEdit 11 came out in 2014.

As with any product that has been around for 25 years, there was a lot of old code in BBEdit, and one of the primary goals for BBEdit 12 was to modernize its code base. That’s work that users seldom see, but there are a few improvements that you might notice. For instance, BBEdit can now take advantage of intrinsic macOS features like Split View, and some controls now rely on system versions rather than custom implementations. Contextual menus now even include services!

Although BBEdit 12 looks and works as it always has for the most part, Bare Bones modernized and improved specific parts of the interface. Dark color schemes now color the sidebar and other chrome to match, rather than just the editing window. And because it’s apparently what new users expect, the BBEdit Dark color scheme is now the factory default for those getting started with BBEdit, although anyone can change that in the Text Colors preference pane. (When I jokingly suggested to Rich Siegel of Bare Bones that the default should be green text on black to match monochrome monitors of the early 1980s, he wryly demurred, noting that he wasn’t a pre-teen anymore.)

Several non-editing windows also gain improved interfaces and capabilities. BBEdit 12’s FTP/SFTP browsers now offer a Finder-like outline mode, so you can flip triangles to drill into directories, rather than being stuck in a flat list view. Text factories now sport activation checkboxes next to each command so you can disable individual steps, something I’ve long wanted. Most impressive is the rewrite to BBEdit’s Preview window, which renders Markdown and HTML — it now includes the full WebKit inspector from Safari’s Develop mode. Speaking of the Preview window, it now relies by default on the CommonMark spec that attempts to provide a standardization of the main Markdown variants. 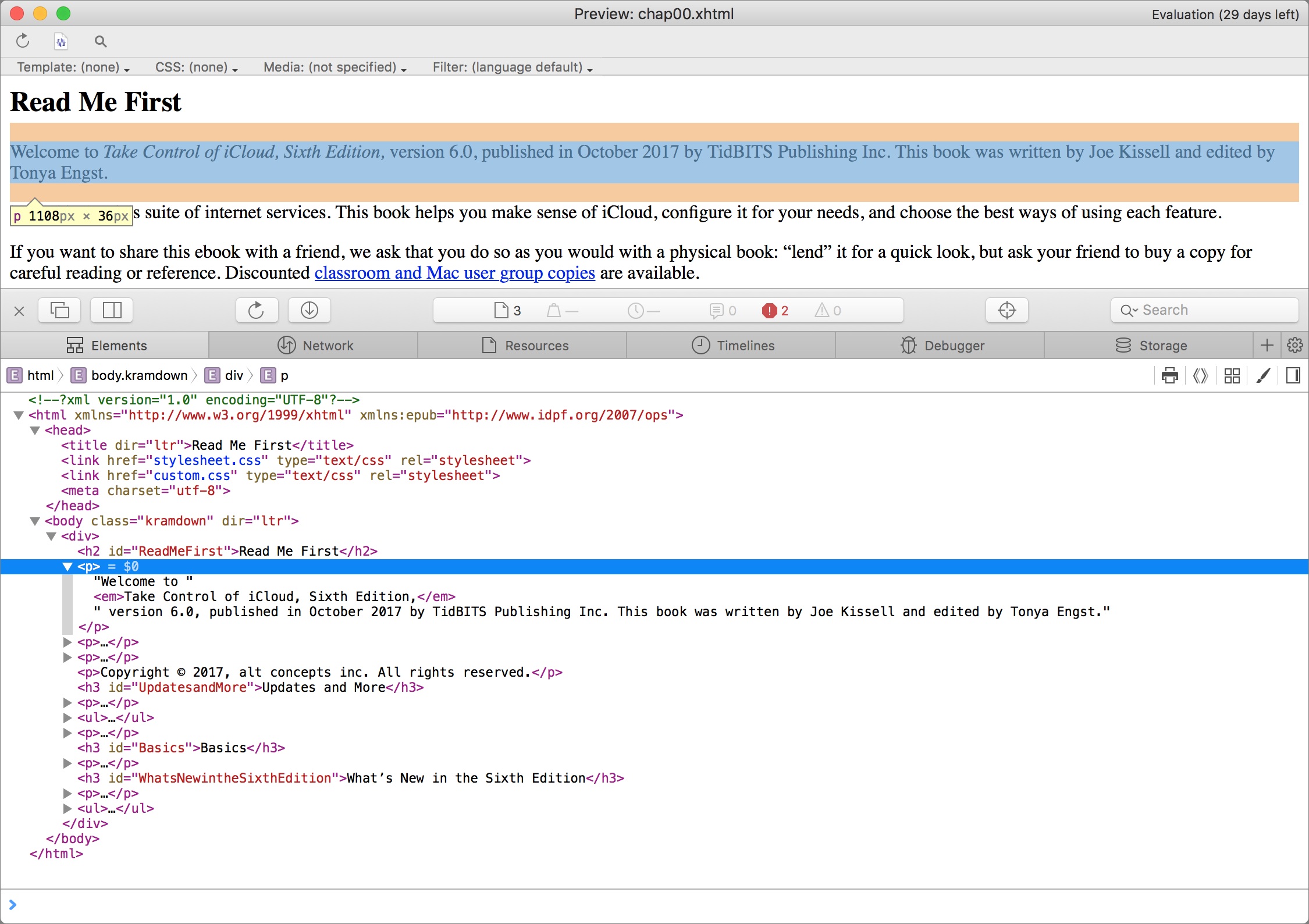 By far my favorite new feature, however, is BBEdit 12’s capability to work with columnar data. Many people open delimited text files (like CSV or TSV files) in BBEdit to manipulate the data, but selecting or moving columns via grep-based searches is tricky. BBEdit now sports a collection of commands in Edit > Columns that let you cut, copy, clear, and rearrange columns, and Rich Siegel said that he hopes to add additional capabilities in this area in the future. 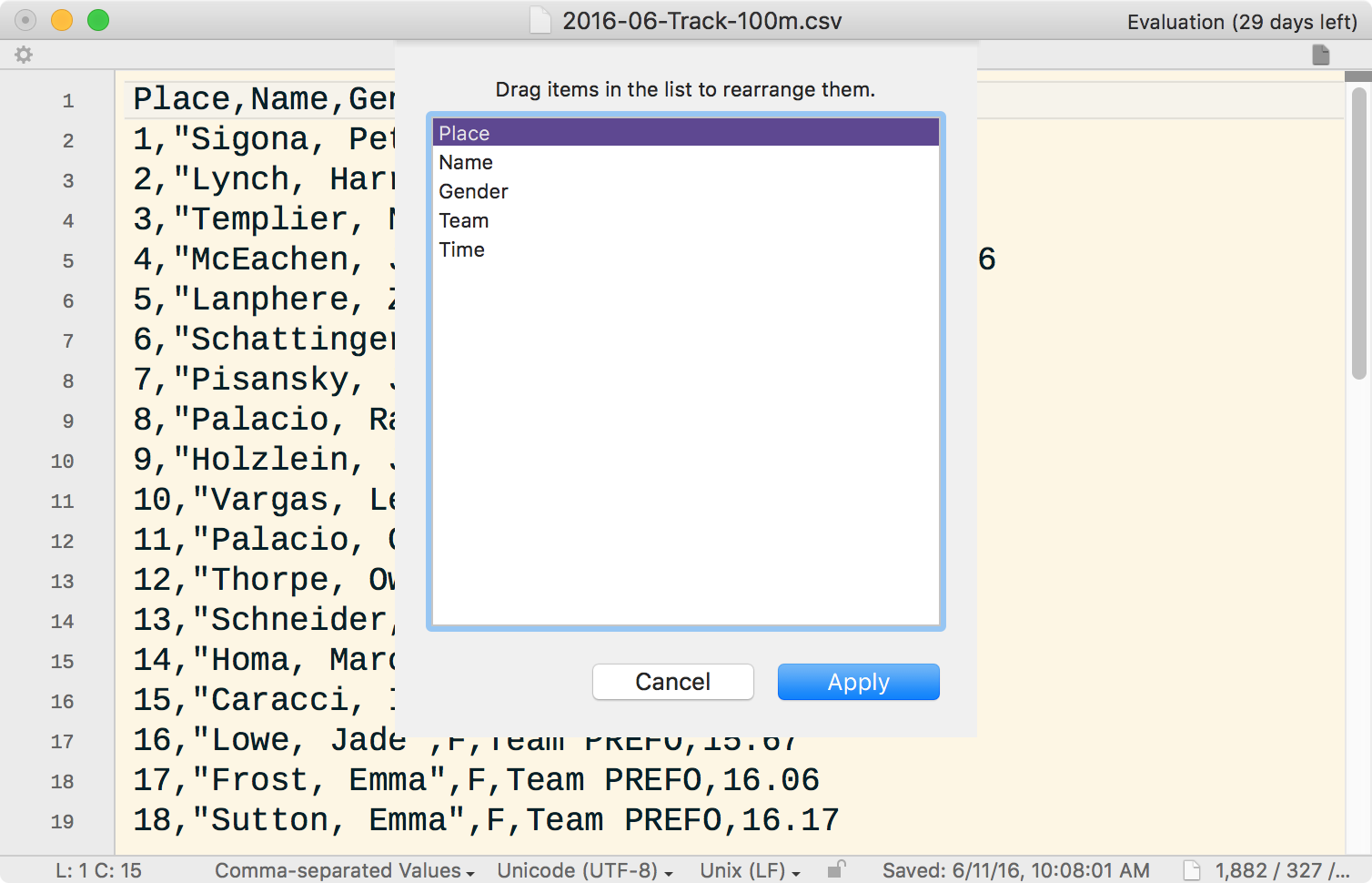 Because of my work timing races and directing track meets, I deal with CSV (comma-separated value) results files all the time. Although I’m pretty good with grep, I often end up opening those files in Excel or Numbers, manipulating the data to get the right columns in the right order, and then exporting back to CSV. Most of what I need can now be done right in BBEdit, which is where I’m already editing the files.

Typing those parenthetical phrases above reminded me of another new feature — improved autocompletion. BBEdit has long had text completion features, but new in version 12 is the capability to pair up parentheses, braces, and brackets. Type an opener and BBEdit automatically inserts its closing pair. Or select some text and type the opener, and BBEdit automatically encloses the selected text — it’s surprisingly addictive. A new Completion preference pane lets you control those features.

Those who like manipulating text will appreciate two new features: Paste Using Filter and Extract. In Edit > Paste Using Filter, you’ll see all your text filters, and if you choose one, BBEdit applies that filter to the contents of the clipboard. There are independent utilities (like the just-released Keyboard Maestro 8 — see “Keyboard Maestro 8 Automates Even More of Your Mac Life,” 9 October 2017) that offer similar clipboard filtering features, but having it in BBEdit
is a win.

Extract isn’t a new feature, having made its debut as a button in BBEdit 11.5’s Find dialog. Instead of merely finding text, it extracts the found text to a new document. BBEdit 12 extends that functionality so you can replace the found text in the same action. Previously, you had to extract the found text and then run another find/replace task on it.

The final new feature that’s worth noting is the Canonize command, which is designed to modify the contents of large numbers of files according to a pre-defined set of plain-text replacement strings. If your team is updating a bunch of old source code, you can create a file containing the search and replace strings, and then everyone on the team can apply those replacements en masse to any file they touch.

See BBEdit 12’s release notes for more information about these features and the complete list of everything that’s changed. It was there I noticed that, perhaps sadly for some, the Consolas for BBEdit font is no longer included.

It’s worth remembering that Bare Bones recently retired TextWrangler in favor of allowing BBEdit to work in a reduced feature mode permanently (see “Bare Bones Drops TextWrangler for BBEdit’s “Free Forever” Demo,” 3 March 2017). So you can try all of BBEdit 12’s features for 30 days, and if you choose not to purchase a license after that, menu items that have green stars next to them during the trial will be disabled. The end result is a text editor that has even more features than TextWrangler did — the Preview window, for instance. Educational institutions who were using TextWrangler before can apply for a special license that hides the disabled menus entirely. Bare Bones
also offers steep site license discounts to businesses.

That said, you can buy new copies of BBEdit 12 for $49.99, and those who purchased BBEdit 11 after 1 March 2017 can upgrade for free. If you’re upgrading from a copy of BBEdit 11 bought before that date, the price is $29.99. And those who are coming from an older version of the app — all the way back to the beginning! — can upgrade for $39.99. That upgrade price applies for copies purchased from the Mac App Store as well. BBEdit 12 now requires OS X 10.11.6 El Capitan and is compatible with 10.13 High Sierra.