The digital movie business has been dominated by DRM lock-in since its inception. For instance, if you purchased movies from Apple, you couldn’t play them on an Amazon device. (However, you can play your Amazon video purchases on most Apple devices.) Hollywood tried to address this problem early on with the UltraViolet digital locker system, but that was a disaster.

I concluded my review with this:

That dream has now come true with the new Movies Anywhere service, which supports movies from the five major studios: 20th Century Fox, Disney, Sony Pictures, Warner Brothers, and Universal. Just like Disney Movies Anywhere, Movies Anywhere is only open to U.S. residents — our apologies to the rest of the world.

Once you’ve created a Movies Anywhere account, you’re prompted to link it to your accounts with the four supported retailers: Amazon, Google Play, iTunes, and Vudu. Unfortunately, Microsoft withdrew from Disney Movies Anywhere before Movies Anywhere was launched. 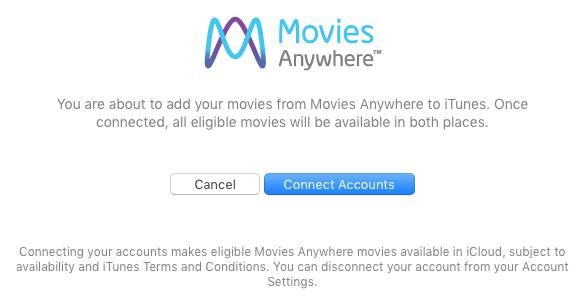 If you didn’t use Disney Movies Anywhere, the way Movies Anywhere works is that once you link a retailer to it, it adds your movies to your purchased list with that retailer. The upside is that if the Movies Anywhere service goes away, your movies remain in your retailer collections. But don’t expect playback or anything else to sync, since each movie exists independently in its own digital silo.

For a limited time, you can get up to five movies for free just for registering with Movies Anywhere. Connect to one retailer to get “Ice Age” and the 2016 “Ghostbusters” remake. Add a second retailer to get “Big Hero 6,” “Jason Bourne,” and “The Lego Movie.” The movies are added to your accounts automatically.

Signing up takes only a couple of minutes. The vast majority of my iTunes movie purchases immediately became available to watch via my Amazon and YouTube accounts (Google Play movie purchases are also available on YouTube under Purchases).

The only exception seems to be “The Interview,” a Sony movie, which for some reason did not transfer from Google to iTunes, but did show up on Amazon. (I don’t particularly care since it’s not a very good movie, but the principle still matters.) There are apparently known issues with linking and syncing, so hopefully they get resolved soon.

Of course, many movies don’t come from one of the five participating studios. Films from Lionsgate, MGM, Paramount, and others won’t sync between services, though they could in the future. (And given that the largest studios are on board, I’m willing to bet that these smaller studios will join at some point.)

So while the James Bond movies from MGM won’t sync with Movies Anywhere, all of the Star Wars movies do, as do films in the Alien, Back to the Future, Batman, Jurassic Park, Lord of the Rings, and Marvel franchises. Not bad!

Why is this important? Chiefly, it means you’re no longer locked into a single ecosystem to watch many of the movies you’ve bought. In real-world terms, if you decide to purchase an Amazon Fire TV instead of an Apple TV 4K, you won’t be locked out of much of your movie collection. Or if you buy a smart TV and wish to use its built-in Amazon Video app, you can watch many of your movies in it without having to connect an Apple device. Also, if one service goes down, you can still watch your movies.

Movies Anywhere costs nothing, is easy to set up, and gives you greater access to your movies. The only downside is that during signup, you have to agree to let Movies Anywhere share your video data (including titles, descriptions, and video activity) with each digital retailer you link to, participating studios, and service providers. All par for the course these days, and frankly, if you’re that protective of your viewing habits, you’re better off watching stuff on discs. (Dear Hollywood: You’ve undoubtedly noticed that my son watches a lot of Jurassic Park. That doesn’t necessarily mean we want more Jurassic Park movies, but we could stand some high-quality original movies that also feature dinosaurs. Also, stop doing creepy
stuff.)

While it’s hard to applaud Hollywood for much these days, I do give Movies Anywhere a big thumbs up. Finally, we have access to cross-platform digital purchases that work with the services and devices we prefer. Kudos to Disney for pioneering it and to the rest of the industry for adopting it.

Comments About Movies Anywhere Frees Your Films From Platform Lock-In