Just ahead of the delivery of iPhone X shipments to its first lucky purchasers, Apple last week released iOS 11.1. In the associated release notes, Apple highlights the addition of over 70 new emoji, along with fixes to photo handling, accessibility, and an assortment of other issues. 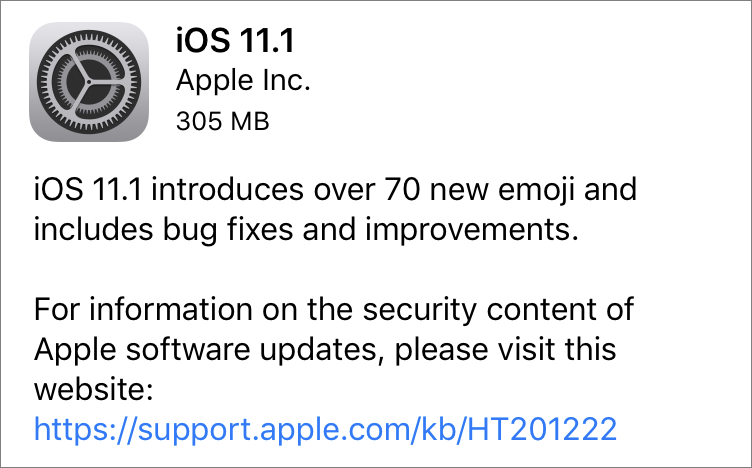 In addition, the update includes some twenty-odd security fixes. Among those is one for the much-publicized KRACK Wi-Fi exploit (see “Wi-Fi Security Flaw Not As Bad As It’s KRACKed Up To Be,” 17 October 2017). Interestingly, Apple’s note implies that it’s necessary only for iPhone 7 models and later and for iPad Pro 9.7-inch and later iPad Pro models.

The new emoji include food types (pie and broccoli!), animals (giraffes and hedgehogs!), and mythical creatures (mermaids and vampires!), as well as what Apple describes as “more expressive smiley faces” (which means one with cartoon swearing). iOS 11.1’s emoji also include new gender-neutral characters and more clothing options.

The improvements to iOS photo handling include fixes for bugs that made some photos appear blurry, slowed down Live Photo effect playback, and prevented some images from appearing in the People album after restoring from an iCloud backup. This last fix might be particularly relevant to purchasers of the new iPhone X, who will doubtless spend some time restoring their iPhone backups to their shiny new devices.

Miscellaneous fixes and enhancements round out iOS 11.1’s offerings: cleared Mail notifications should no longer appear on the Lock screen, using 3D Touch on the display edge should again invoke the app switcher, and some third-party GPS accessories should now provide better accuracy.

Although Apple also released watchOS 4.1, iOS 11.1 includes a couple of Apple Watch-related fixes (see “watchOS 4.1 Delivers on Promised Features,” 31 October 2017). One resolves an issue that caused settings for Heart Rate notifications to appear in the Apple Watch app for first-generation Apple Watches, and another fixes a problem that prevents app icons from appearing in notifications on the Apple Watch. Notably missing from iOS 11.1 are the promised person-to-person Apple Pay and AirPlay 2, both of which Apple initially promised for iOS 11 but still haven’t shipped.

As always with interim updates like this, we encourage some level of caution when updating. Wait a couple of days before taking the leap, just in case there’s an unanticipated problem that early adopters encounter. Of course, if you’re concerned about the KRACK exploits or regularly need to communicate about broccoli in emoji, there’s no inherent need to wait.