Apple has released watchOS 4.1, delivering a few features promised for watchOS 4 that didn’t make the initial release and fixing a variety of bugs. 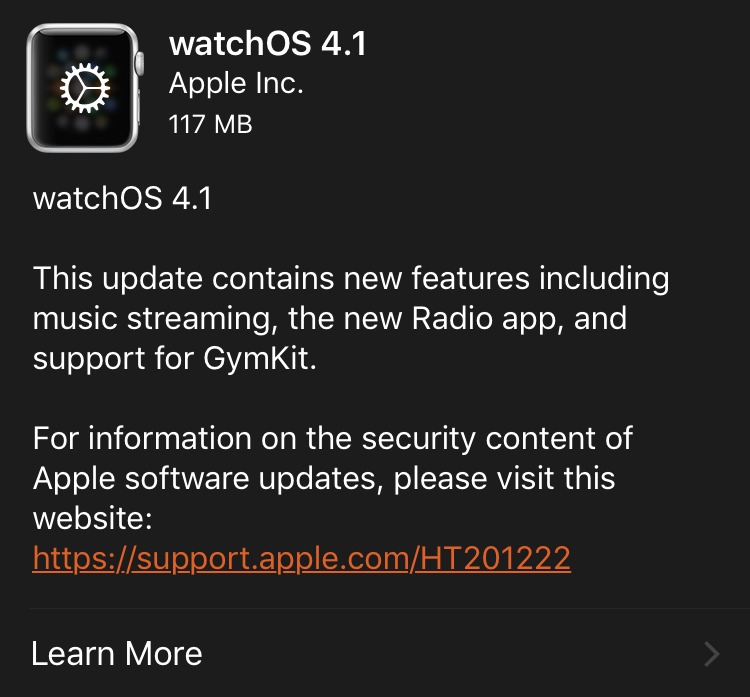 Most notable is that the Apple Watch Series 3 can now stream music from either Apple Music or iCloud Music Library. Series 3 users can also now listen to live radio on Beats 1, custom stations, and expert-curated stations with the new Radio app. Plus, Apple’s release notes claim that all Apple Watch users will be able to use Siri to find and play songs, playlists, and albums, but that seems to work already in watchOS 4.0.

watchOS 4.1’s final new feature is the capability for Apple Watch Series 3 cellular users to use Control Center to disconnect from a Wi-Fi network. That could be useful if you want to force the Series 3 to communicate via cellular rather than Wi-Fi.

There are also a few security fixes, including one for the recent KRACK exploits on the Apple Watch Series 1 and Series 2 (see “Wi-Fi Security Flaw Not As Bad As It’s KRACKed Up To Be,” 17 October 2017).

As with other updates, you may as well wait a day or two to update to watchOS 4.1, just in case it causes a problem for some users and Apple pulls or replaces it.

watchOS 4.1 is a 117 MB update that you install via the Watch app on your iPhone (in Watch > Settings > General > Software Update). Remember that the Apple Watch must be on its charger, charged to at least 50 percent, and within range of your iPhone, which itself must be on Wi-Fi. Don’t start installing if you’ll want to use the watch again within an hour or so — watchOS updates take surprisingly long to load.

Apple Watch Problem Solving Security
Cookies & Privacy: We wish we were talking about chocolate-chip cookies here, but our Web site—like nearly all others—relies on a few minor digital cookies. Various laws around the world require us to tell you that fact, so consider yourself informed, if not nourished. By continuing to use this site, you agree to our use of these cookies. Cookie and Privacy Notice