As I write this, it is Saturday morning, 2 December 2017. The sun has yet to rise. I have yet to put on pants. Nonetheless, I’m staring at the release notes for iOS 11.2, a significant update of iOS that Apple released overnight. Despite the company’s penchant for opening pre-orders at the absurd hour of midnight Pacific time, Apple usually releases software updates, at least for those of us in the United States, on a weekday, while it’s light out.

Just before I fell asleep last night, news broke of a terrible bug affecting Australian users. As the clock struck midnight and the date changed to 2 December 2017 down under, Australian iPhones started rebooting. And rebooting. Every few seconds or minutes, affected iPhones rebooted again.

Reddit users in /r/iphone caught on to the problem and quickly began suggesting solutions. The obvious solution, rolling back the clock, broke so many apps that it was not advised. The best alternative was to turn off third-party notifications. But the real fix is to install iOS 11.2.

You can download the iOS 11.2 update either in Settings > General > Software Update or via iTunes — it’s about 430 MB on an iPhone X. We usually advise a waiting period before installing such large updates, but given Apple’s software quality problems this week, the better part of valor would seem to be to install it right away. We hope the iOS 11 quality assurance team did a better job on the 11.2 release than the High Sierra team did with the root vulnerability bug update. 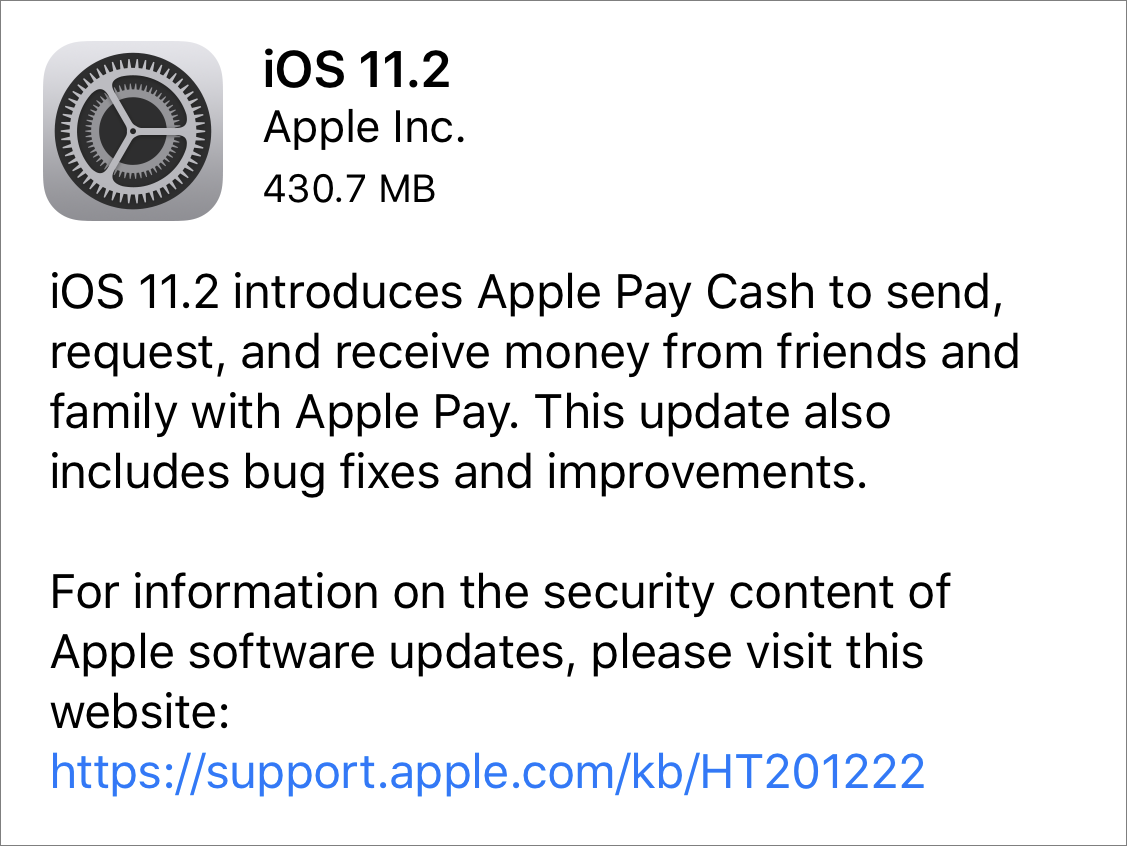 As for you, gentle iOS user, if your device is stuck in a terrible reboot loop, your best bet, per iMore’s Rene Ritchie, is to navigate to Settings > Notifications and disable all third-party notifications. That should stop the reboot loop.

iOS 11.2 also fixes another glaring glitch that caused error-inducing lag in the built-in Calculator app (see “iOS 11 Calculator Lags Cause Errors,” 9 November 2017). Unofficially, it reportedly fixes the lesser known bug that autocorrected the word “it” into the abbreviation “I.T.”

Besides preventing your iPhone from entering an infinite loop of reboot doom or turning your 24 into a 6, iOS 11.2 finally brings us Apple Pay Cash, the now-official name for Apple’s person-to-person Apple Pay feature. Well, it sort of does. It wasn’t available at release, and as of 4 December 2017, there is (sometimes) a switch to enable it in Settings > Wallet & Apple Pay, though it doesn’t seem to be functional yet.

Apple Pay Cash would undoubtedly be the top story if not for this reboot bug. Our condolences to the Apple Pay Cash team for having their feature release overshadowed by a bug fix. We plan to have in-depth coverage once Apple enables it.

iOS 11.2 also adds support for faster Qi “wireless” charging for the iPhone 8, 8 Plus, and X, if you have a compatible charger. These devices push out 7.5 watts of power, as opposed to the typical 5 watts.

The update also adds three new live wallpapers for the iPhone X. You can find them in Settings > Wallpaper > Choose a New Wallpaper.

In the Podcasts app, you can now swipe up while playing an episode to see a sleep timer, episode description, chapters, episode notes, and Up Next.

On the accessibility front, iOS 11.2 adds support for real-time-text phone calls for the deaf and hard of hearing.

The rest of the changes are bug fixes for less severe problems. The iOS 11.2 update:

Apple hasn’t yet published a list of security updates for iOS 11.2, although they should appear soon on the Apple Security Updates page. That team must have had the weekend off.

Kudos to Apple for moving up iOS 11.2 release schedule to help affected users, but this is yet another nasty bug that Apple’s testing should have caught and fixed sooner. It doesn’t help that it reared its ugly head the same week as a security hole the size of Texas was found in macOS 10.13 High Sierra, and the first update to fix that problem broke file sharing (see “Apple Pushes Updates to Block the Root Vulnerability Bug,” 30 November 2017). And it hasn’t even been a month since the iOS bug that autocorrected the letter “i” to the letter “A” followed by a question mark in a box (see “Me, Myself, and A⍰,” 7 November
2017).

Something is clearly rotten in the state of Denmark, by which I mean Apple’s quality assurance department. Many long-time TidBITS readers have been complaining for years about Apple’s declining software quality. Major missteps like these give Apple a black eye and, when they affect tens or even hundreds of millions of users, cause a significant waste of the world’s time.