Apple has released tvOS 11.2 for the fourth-generation Apple TV and the Apple TV 4K. If it hasn’t already updated automatically, you can update your Apple TV by going to Settings > System > Software Updates.

Home theater enthusiasts who own an Apple TV 4K will be pleased to hear that tvOS 11.2 offers new dynamic range and frame rate matching settings for that model under Settings > Video and Audio > Match Content. You can turn on Match Dynamic Range or Match Frame Rate to have the Apple TV 4K match the original dynamic range or frame rate of the content you are watching, instead of upscaling the content to the maximum your television set supports.

If you have an Apple TV 4K, I recommend enabling those settings. I don’t know what content scaled up to HDR color would look like, but I have seen what happens when 24 frames-per-second content is upscaled to 60 fps, and it’s not pretty. Imagine everything you watch looking like a soap opera.

The other big feature, at least for sports fans in the United States, is the addition of the Sports screen to the TV app. The Sports screen tracks a wide world of sports, showing you what’s currently on and what’s scheduled for the day. It really does track sports around the world — when I first opened it, it had listings for European soccer, American college basketball, American high school football, the NBA, and Canadian curling. 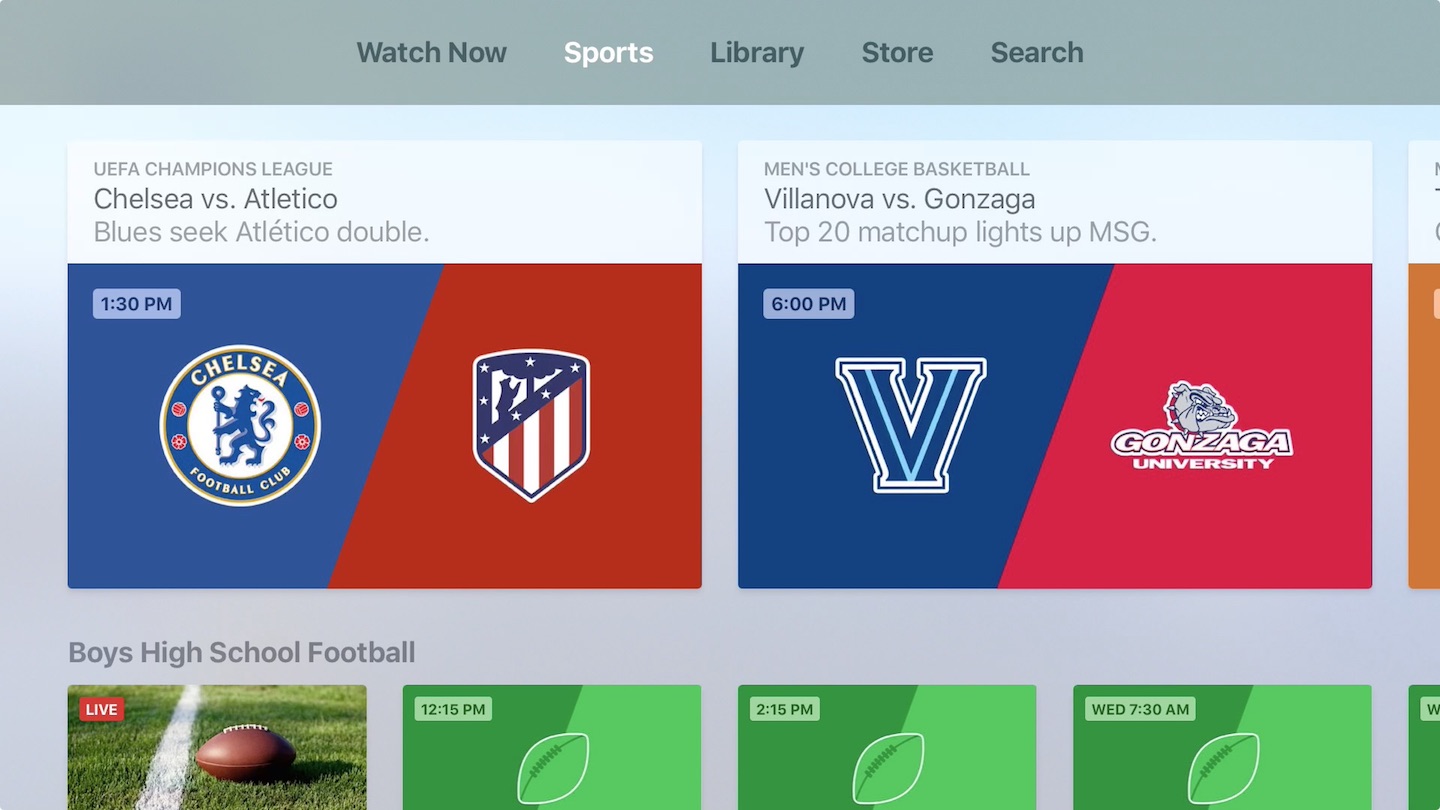 Opening a listing for a game gives you an option to watch via the appropriate app, if the game is live. But chances are, to watch a live sports game, you’ll have to subscribe to the appropriate sports channel, and your TV provider will have to have a deal in place with the app provider. If your TV provider supports Apple’s single sign-on function, tvOS will walk you through the process of authorizing the app. You can set up single sign-on in Settings > Accounts > TV Provider. Happily, Apple supports many more providers than it used to.

In a game’s listing, you can also add the game to your Up Next list to watch later. When the game is on, it should appear in that list on the Watch Now screen, and you should receive a notification when it starts. 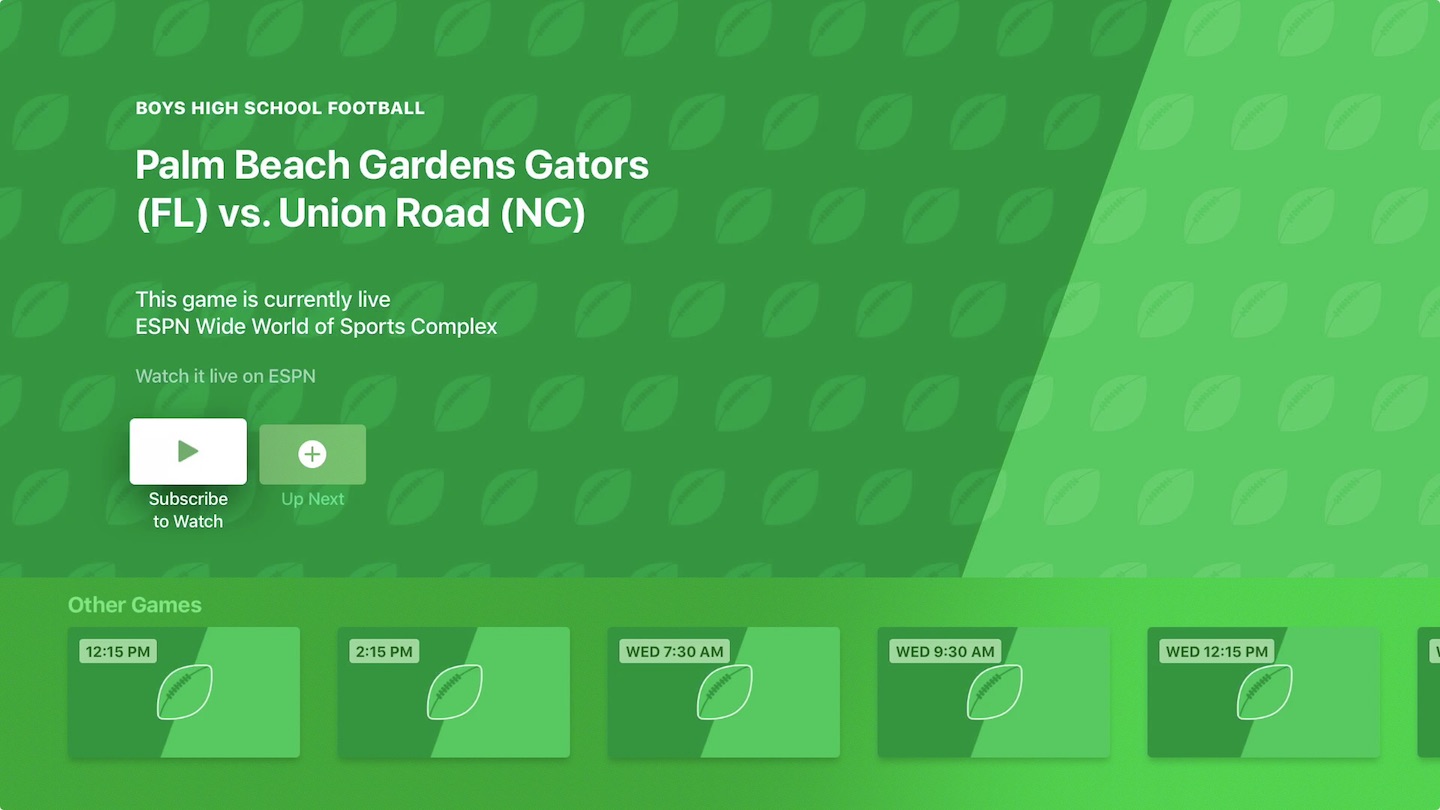 At the bottom of the Sports screen is a banner you can click to choose your favorite teams. You can select favorite teams from a variety of major sports leagues: MLB, NBA, NHL, college, etc. Setting a team as a favorite makes tvOS offer you those games in your Up Next list, place them prominently in the Sports screen, and notify you when those teams are playing. 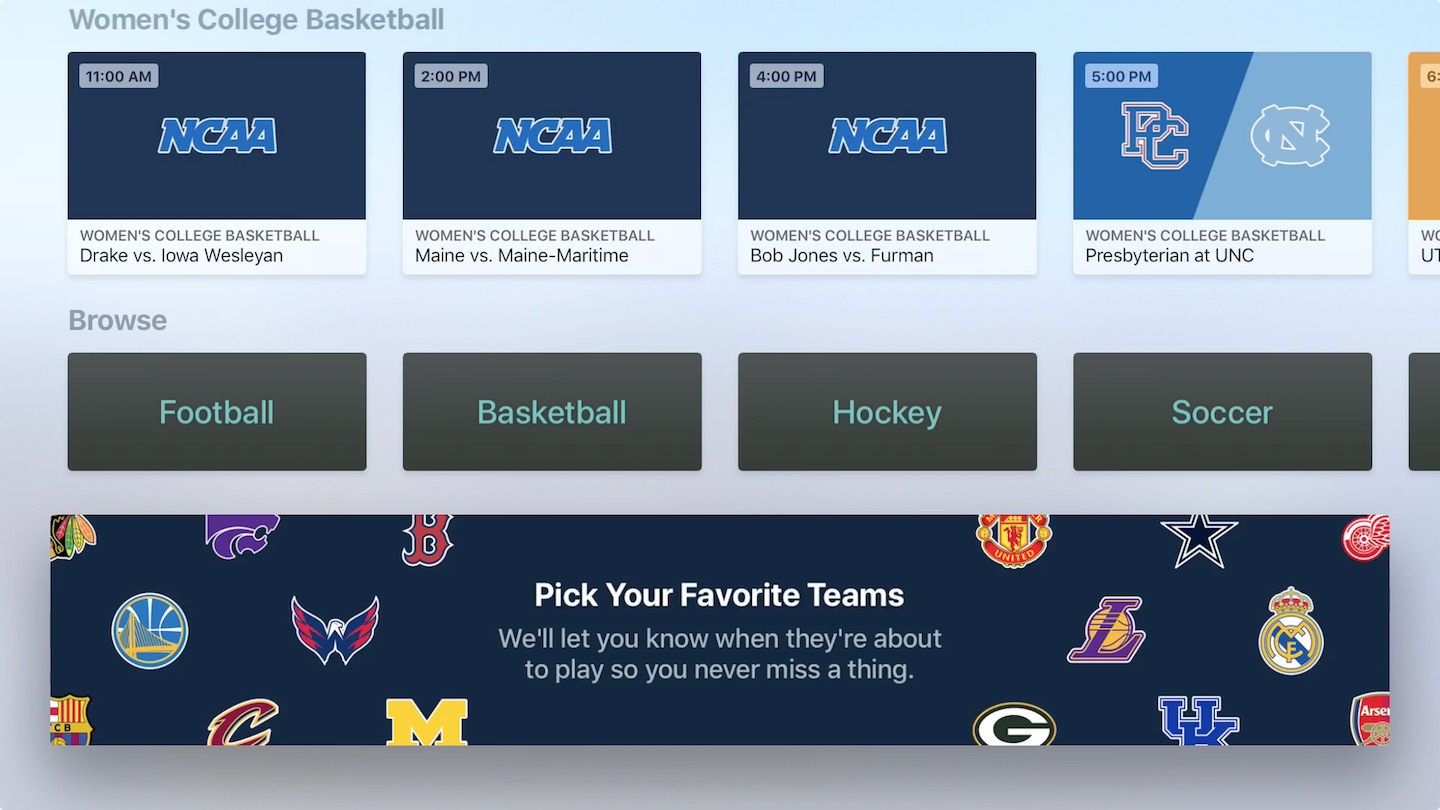 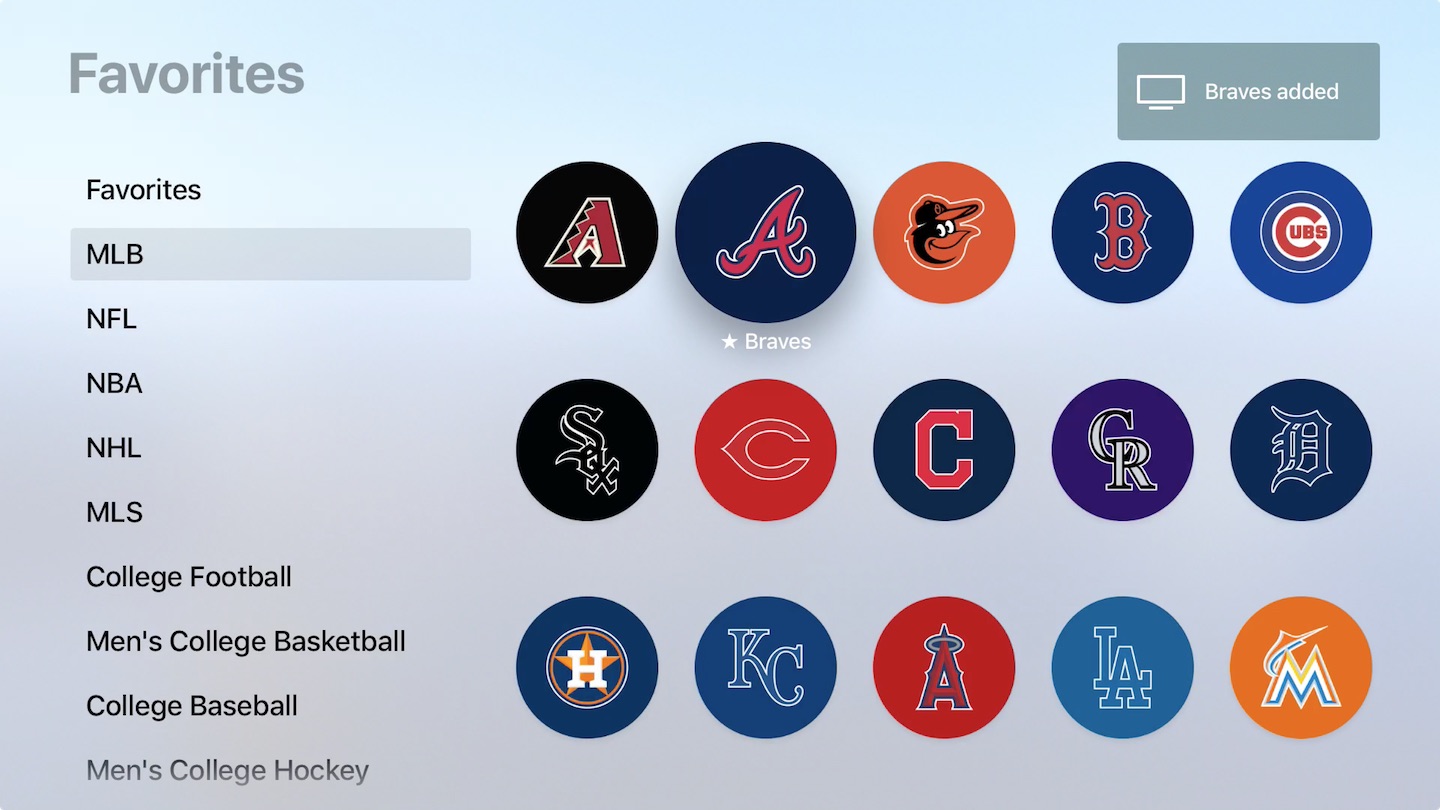 To remove a team from your favorites, open TV, go to the Sports screen, scroll down to and click Your Favorite Teams, navigate to the favorites list, click the team, and choose Remove.

What I find disappointing, and somewhat baffling, is that while Apple seems to be going out of its way to show you how complete the Sports screen is (look, it includes curling!), it misses out on some popular sports entirely, like racing, boxing, figure skating, track and field, and mixed martial arts (MMA). The absence of MMA is especially puzzling, since the Ultimate Fighting Championship has a tvOS app.

The new sports features are impressive, and as far as I know, unrivaled by any competing platform. But since they largely depend on you authorizing apps with traditional television providers, they won’t do much for cord cutters. And the option to match the content’s frame rate is welcome, but it’s frustrating that it’s only for the Apple TV 4K. (Since the fourth-generation Apple TV doesn’t support High Dynamic Range color, the match dynamic range setting wouldn’t make much sense there),

As the author of “Take Control of Apple TV,” it saddens me that I now have a hard time recommending the Apple TV. Between the high price of the Apple TV 4K, the languishing App Store, and the fact that the Movies Anywhere service makes most of your iTunes-purchased movies cross-platform (see “Movies Anywhere Frees Your Films From Platform Lock-In,” 14 October 2017), there’s not much to be excited about in the Apple TV world.

I was slapped in the face by this harsh reality recently, when I helped my in-laws purchase a new TV. For $333 after tax, they got a TCL-produced 55-inch 4K with Roku software built in (it was a one-day deal from Target, but I’m sure we’ll see this TV that cheap again). The picture is excellent, and the built-in software is snappy, user-friendly, and helpful. The remote is simple, yet ergonomic. Not only is it a far better value than the Apple TV, but it also does a better job at the primary task of watching content. They were so thrilled that I bought them a $50 Roku box for their old TV — despite its low price, the Roku box is arguably more capable than a $180 Apple TV 4K.

The main win of the Apple TV is its integration into the Apple ecosystem, but that may not be enough for many people to justify the Apple TV’s price when faced with significantly less expensive competitors and integrated smart TV capabilities. New sports features aside, Apple needs to up its game.

Apple TV Entertainment
Cookies & Privacy: We wish we were talking about chocolate-chip cookies here, but our Web site—like nearly all others—relies on a few minor digital cookies. Various laws around the world require us to tell you that fact, so consider yourself informed, if not nourished. By continuing to use this site, you agree to our use of these cookies. Cookie and Privacy Notice