Apple Pay Cash is finally active in the United States, several days after the iOS 11.2 update that technically included it. Apple first announced it as a feature for iOS 11 at this year’s WWDC, back in June (see “iOS 11 Gets Smarter in Small Ways,” 5 June 2017).

Apple Pay Cash is the official name for the person-to-person Apple Pay feature that was still unnamed at WWDC. Like Square Cash, Venmo, and other services, it lets you send money to other people, assuming that they’re using iOS 11.2. It’s the easiest way to exchange money with other iOS users, beating out cash, gold, and chickens. To trade money with friends and family not on the Apple bandwagon, check out one of the other payment services Glenn Fleishman described in “Circle, Square, and Venmo: Payment Apps Let You Pay via iMessage” (3 October 2016).

Setting It Up — To enable Apple Pay Cash, you must first have Apple Pay set up. If necessary, iOS 11.2 likely prompted you to do so after the update process. If you ignored the prompt then, tap Settings > Wallet & Apple Pay > Add Credit or Debit Card. It’s a straightforward process, possibly except for verifying Apple Pay with your bank, which can differ by bank. Chase set it up automatically, while Ally made Josh call a special mobile payments department to authorize it.

Once you’re set up for Apple Pay, just enable the Apple Pay Cash switch in Settings > Wallet & Apple Pay and follow the prompts. If that switch doesn’t appear for some reason, try restarting your iPhone by going to Settings > General > Shut Down, and then press the Sleep/Wake or side button to turn the iPhone back on.

If you’re not already on that Apple Pay Cash screen, go there to finish a few setup tasks. Skip past the stuff under Balance for now and look at the Accepting Payments header. The default is to accept payments automatically, which is likely fine unless you can imagine a situation that would be awkward if money was accepted on your behalf automatically (politicians, take note!).

Scroll down and check the Billing Address setting to make sure it’s correct. Also look for the Verify Identity setting, which is important. On our iPhones, its description said, “Complete identity verification to continue using Apple Pay Cash without interruptions.” 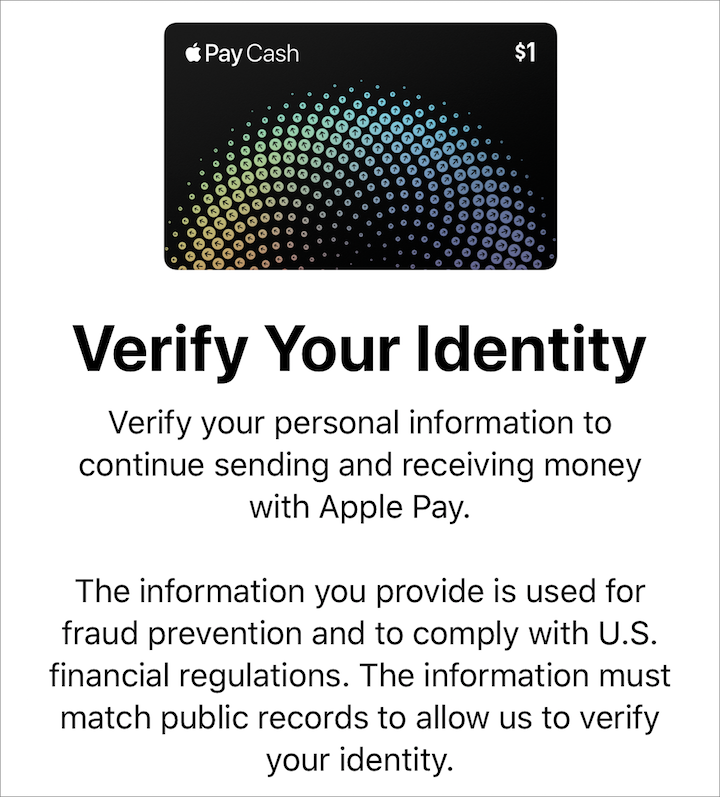 Tap Verify Identity, and you’ll be prompted to enter your legal name, your residential address, the last four digits of your Social Security number, and your date of birth.

If you don’t verify your identity, Green Dot Bank, which is the bank Apple is working with for Apple Pay Cash, may close your account, allow you to use only the money that is in the account, or let you use it with transaction limits — see the full terms and conditions for details. Federal law sets these requirements to fight the funding of terrorism and money laundering activities.

Trading Money — Before you leave the Apple Pay Cash screen, I’d like to point out one more thing. If you tap the Add Money option near the top, you can add additional funds to your Apple Pay Cash card from a linked debit or prepaid card in Apple Pay. The amount entry screen offers a keypad, but for convenience, it adds quick buttons for $10, $20, and $50. The minimum you can add is $10.

To send or request money via Apple Pay Cash, you use its Messages app, which is installed automatically when you turn on Apple Pay Cash. While in an iMessage thread with the person with whom you want to exchange money, make sure the app drawer is showing (tap the app button if necessary) and then tap the Apple Pay button in the drawer.

Note that if the recipient isn’t running at least iOS 11.2 or watchOS 4.2, you’ll receive an error message. Apple lists all sorts of things that could prevent an Apple Pay Cash transaction. 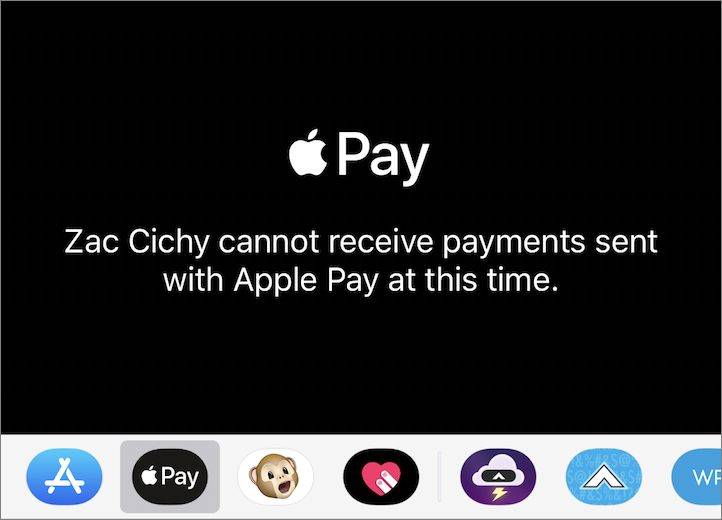 If your recipient can use Apple Pay Cash, you’ll see a panel with plus and minus buttons, a dollar amount, and buttons for Request and Pay. 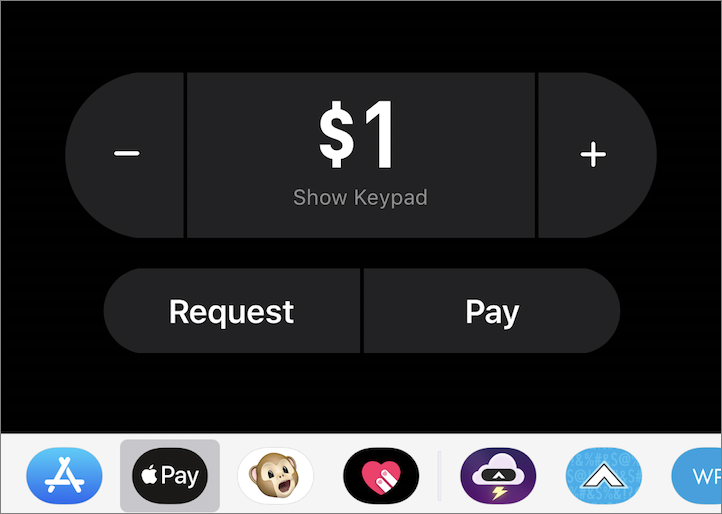 First, enter a dollar figure. The default is $1, but you can increase and decrease that with the plus and minus buttons, or tap Show Keypad to enter an amount directly. Use the keypad to enter amounts that include dollars and cents. When you’re finished, tap Request or Pay to insert the appropriate transaction into a message.

Don’t worry about accidental sends because the money or request won’t be sent until you tap the send button, just like any other Messages app. If you change your mind, you can remove the Apple Pay Cash attachment by tapping the little x in the upper-right corner. Like any other Messages attachment, you can also add a comment below the attachment. Interestingly, the message bubble will be black, and if a friend is working on sending you an Apple Pay Cash payment, there’s a special in-progress bubble for it. 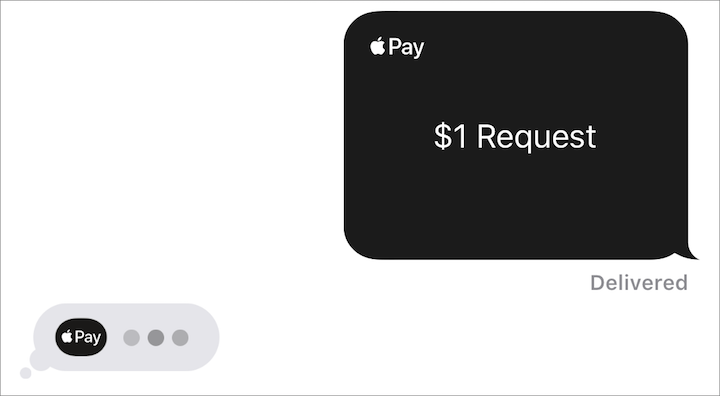 When you send money, you get one last chance to verify the transaction, via a regular Apple Pay prompt. On Touch ID devices, you’ll be prompted for a fingerprint. The iPhone X will instead ask you to double-click the side button and be identified with Face ID.

Be careful here! If you choose to fund the transaction with a credit card, as opposed to a debit card or “eligible prepaid card,” you’ll be charged a 3 percent transaction fee. It’s not a lot, but if you plan on using Apple Pay Cash frequently, linking to a debit card makes more sense. 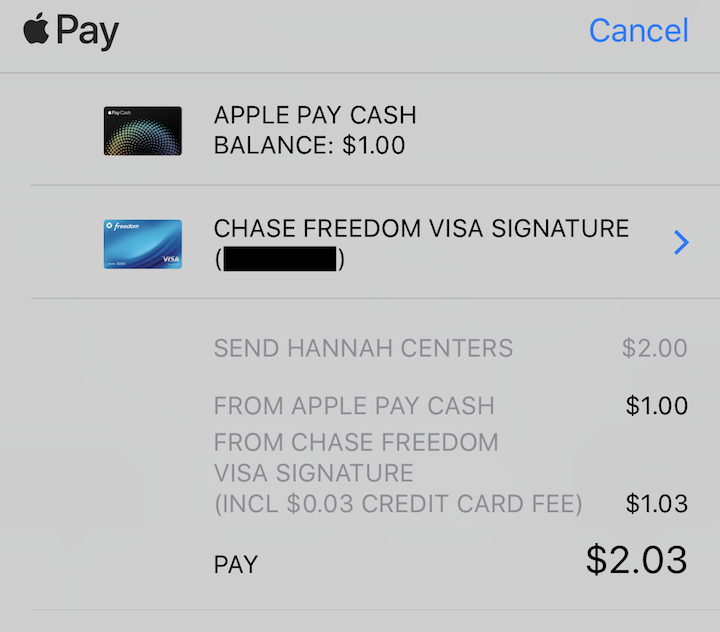 If someone requests money from you, you’ll receive a message with a Pay button you can tap to initiate the payment. Likewise, if your settings require manual approval to receive payments, you need to tap the Accept button that appears in the message attachment. 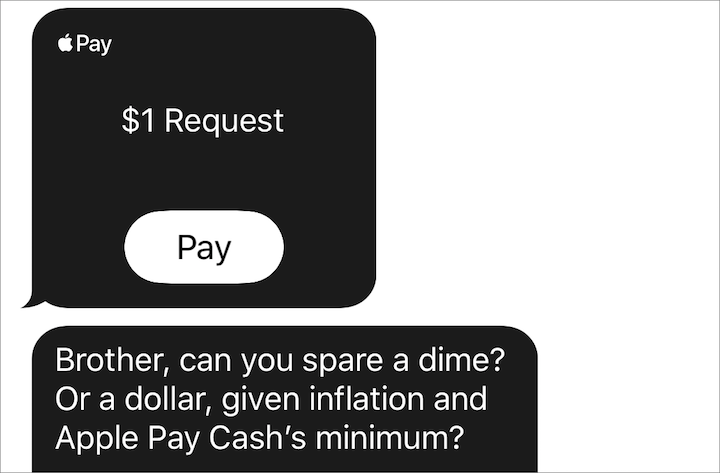 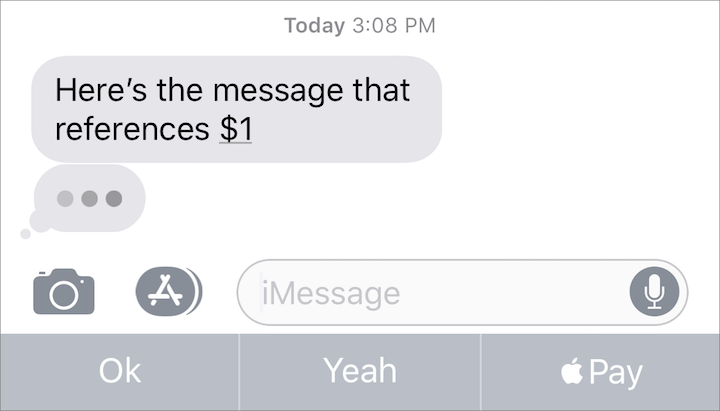 When you receive money, it remains on your Apple Pay Cash card by default, although you can withdraw it to a linked bank account.

You can also use Siri to send cash. Tell it something like, “Send my mom a dollar.” If you have multiple apps that can initiate a payment via Siri, you’ll be asked to choose one. 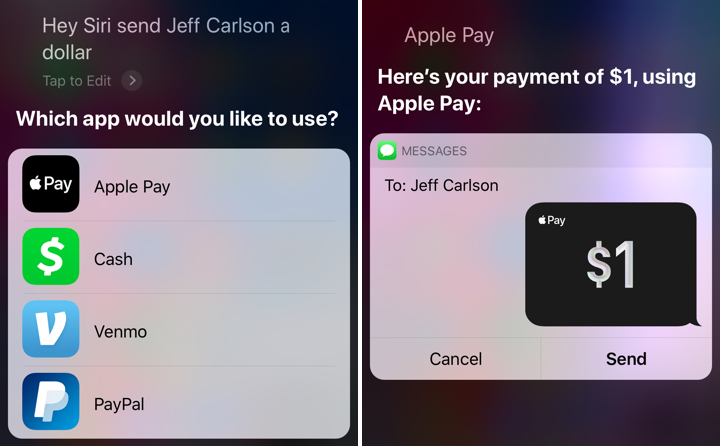 In our usage so far, Apple Pay Cash has been easy to use and has performed flawlessly.

You may have to set up Apple Pay Cash in the Watch app after you’ve done so in iOS. In the iPhone’s Watch app, on the My Watch screen, go to Wallet & Apple Pay > Apple Pay Cash, and tap Continue to set it up.

Regardless, after you tap Send in the Messages app on the Apple Watch, you’re prompted one more time to double-click the side button to confirm the transaction, making it easy to back out if need be.

Cashing In — Money on your Apple Pay Cash card won’t do you much good unless you regularly pay others via Apple Pay Cash or buy things with Apple Pay. If that’s not the case, you can withdraw that money to a bank account by going to Settings > Wallet & Apple Pay > Apple Pay Cash > Transfer to Bank.

If you haven’t transferred money before, you’ll have to tap Add Bank Account to set it up — have your bank account and routing number handy. The hardest part is finding those numbers; Apple provides a handy graphic to help.

When it comes time to withdraw, the process works like any other Apple Pay Cash transaction — enter an amount and then identify yourself with a passcode, Touch ID, or Face ID.

Like many financial transactions, it takes 1 to 3 days for your Apple Pay money to arrive in your bank account. Apple doesn’t provide any automatic way to withdraw your money, but since Apple Pay Cash is just for person-to-person transactions, not small business transactions, that shouldn’t be a significant annoyance.

We do wonder how much interest Apple is earning from all the money users will store in Apple Pay Cash — even if it’s less than $20 per person, that could still end up being millions of dollars.

Do you think you’ll use Apple Pay Cash? Let us know in the comments.