As promised, Apple released the iMac Pro before the end of 2017, quietly showing the date orders would start on its Web page a few days early and taking purchases as of 14 December 2017. We wrote a bit about the first impressions from a few YouTubers and others who Apple seeded with early units in “The iMac Pro Arrives on December 14th” (12 December 2017), but more details have since been revealed. 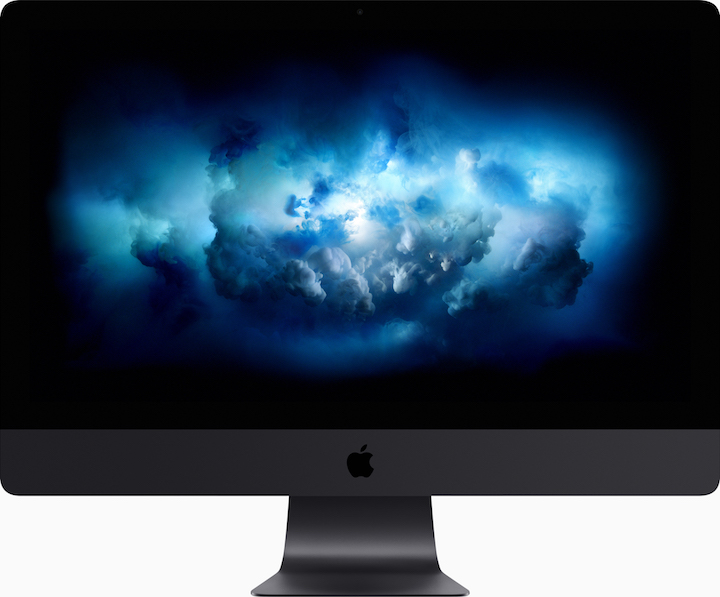 Specs and Options — Most notably, the iMac Pro will seem expensive, with the base model starting at $4999. For that you get a machine with the following specs:

One fascinating addition is the iMac Pro’s ARM-based T2 chip, which manages encryption and security throughout the system, among much else. It can provide a secure boot option in which the T2 processor validates every aspect of the boot process to make sure it hasn’t been tampered with. We hope to have more in-depth analysis of the T2 processor in the future.

You can spend more to soup up the iMac Pro even further. Here are your CPU options, although the 14-core and 18-core models aren’t shipping for 6–8 weeks.

And your RAM options:

Although you cannot upgrade the iMac Pro in any way yourself, Rene Ritchie of iMore noted that you can have more RAM installed later by taking it to an Apple Store or an Apple Authorized Service Provider.

Those hoping for a user-upgradable professional machine will have to hold out for the promised modular Mac Pro redesign, which Apple said would appear sometime after 2017. The company has given no hints as to what it will look like, how much it will cost, or what its specs might be. However, Rene Ritchie says that it will be accompanied by Pro Displays — yay!

If you want more solid-state storage space, you can get it, but brace yourself on the pricing:

There’s only one option for a video upgrade:

That’s undoubtedly a lot of money, but in general, if you think it’s too expensive, you’re not in the target audience. Apple is aiming the iMac Pro at the sort of people — video editors, audio professionals, engineers, and developers — for whom time translates directly into money. If you can turn an edit around or compile a complex app sufficiently faster, you’ll soon make up the cost of the iMac Pro in increased productivity.

There’s still no reason to spend money unnecessarily. Developer Marco Arment recommends ordering through the business rep at your local Apple Store (assuming you’ll be using this machine for business) to get a 5 to 15 percent discount and looking at state sales tax exemptions like New York’s ST121.3 exemption for computer system hardware used by programmers and Web developers (who knew?).

Early Coverage — Some of the first coverage to appear came from YouTuber Marques Brownlee, who Apple seeded with an early-access unit. His video is a pretty good analysis of how the iMac Pro works for video production with the latest version of Final Cut Pro X.

London-based video editor Thomas Carter wrote up his initial impressions for Randi Altman’s postPerspective. In short: “These tests really blew me away. They aren’t necessarily going to be everyday scenarios for most people, or even me, but they make it possible to imagine editing workflows in which you’re working at close to the highest quality possible throughout the entire process. … While I really haven’t had enough time to do a deep dive, it’s clearly the best Mac I’ve ever used — it’s stupidly powerful and great to work on.”

At least one developer received an early iMac Pro: Craig A. Hunter of Hunter Research and Technology, who tested the iMac Pro with some NASA tools for aerodynamic design and development. He summed up his review with:

There’s an old saying about money burning a hole in one’s pocket. Every once in a while, a product comes along that has a similar but reverse effect on me — it’s a product that’s so compelling, so exciting, so gorgeous to look at, that it causes my wallet to heat up and maybe even burst into flames. The new iMac Pro is one of those products.

For what is perhaps the most interesting article, though, turn to Ars Technica, for whom writer Samuel Axon profiles professional uses of the iMac Pro already underway. He said, “There’s no question that the performance on display here is cutting edge — especially for an all-in-one. Creative professionals who are entrenched in Apple’s ecosystem will probably be delighted to have such a powerful machine to work with, even if it may not be as adaptable as the promised Mac Pro update we’re still waiting for.”

We won’t be ordering an iMac Pro for anyone at TidBITS because nothing we do requires such power, but if you get one, we’re curious to hear how its performance enhances your productivity.