Over the holiday break, news broke claiming that Apple was intentionally reducing the performance of older iPhones — specifically the iPhone 6, iPhone 6s, and iPhone SE — in an effort to avoid unexpected shutdowns.

The fact that Apple was doing something to address those shutdowns wasn’t a revelation. The company had said it was looking into the problem and claimed it had implemented a fix in iOS 10.2.1, back in early 2017. There was some dispute as to whether that actually happened since Apple included nothing in the release notes about it at the time (see “Apple Releases macOS Sierra 10.12.3, iOS 10.2.1, tvOS 10.1.1, and watchOS 3.1.1,” 23 January 2017). Subsequently, however, Apple amended iOS 10.2.1’s release notes
to say:

Speculation ran rampant and many users took to Twitter to express their anger at Apple for this slowdown, with conspiracy theorists suggesting that it was all aimed at getting people to upgrade sooner. Even if reducing performance was a reasonable way to reduce the likelihood of unexpected shutdowns, people felt that Apple should have communicated better about how that fix had been achieved and given users more information in iOS about what was happening.

On 28 December 2017, Apple responded with “A Message to Our Customers about iPhone Batteries and Performance,” a carefully worded clarification and apology. In it, Apple unequivocally said that it wasn’t trying to encourage upgrades:

First and foremost, we have never — and would never — do anything to intentionally shorten the life of any Apple product, or degrade the user experience to drive customer upgrades. Our goal has always been to create products that our customers love, and making iPhones last as long as possible is an important part of that.

Apple then went on to explain how lithium-ion batteries age, noting that batteries lose their ability to hold a charge over time and with the number of times a battery has been charged. Plus, other factors, such as extreme heat, can cause a battery to age faster. The problem is that an aging battery doesn’t just run for less time, it’s also less capable of supporting peak energy loads. When that happens while the battery is already low — 30 or 40 percent — the iPhone can just shut down.

To address the problem, Apple changed how iOS manages performance, basically trying to even out behaviors that result in requests for peak power.

About a year ago in iOS 10.2.1, we delivered a software update that improves power management during peak workloads to avoid unexpected shutdowns on iPhone 6, iPhone 6 Plus, iPhone 6s, iPhone 6s Plus, and iPhone SE. With the update, iOS dynamically manages the maximum performance of some system components when needed to prevent a shutdown. While these changes may go unnoticed, in some cases users may experience longer launch times for apps and other reductions in performance.

Customer response to iOS 10.2.1 was positive, as it successfully reduced the occurrence of unexpected shutdowns. We recently extended the same support for iPhone 7 and iPhone 7 Plus in iOS 11.2.

We experienced this problem on both an iPhone 6, which I used for two years before handing it down to Tristan, and an iPhone 6s, which Tonya is still using today. The battery on Tristan’s iPhone 6 is nearly dead — he insisted on nursing it along until he could get my iPhone 7 rather than replace the battery. And while Tonya’s iPhone 6s, which is a year younger, still works, it has long suffered from the unexpected shutdowns. Despite what Apple said, iOS 10.2.1 didn’t eliminate the shutdowns for her — she doesn’t run it low enough that it was worth going without while the battery was replaced (we have no Apple stores within easy driving distance).

Apple suggested that the reason people started to complain now was related to temporary performance problems related to upgrading and bugs in iOS 11 that have since been fixed. However, Apple made another interesting statement:

We now believe that another contributor to these user experiences is the continued chemical aging of the batteries in older iPhone 6 and iPhone 6s devices, many of which are still running on their original batteries.

On the face of it, Apple’s just saying, “Another year has passed, so the batteries in the iPhone 6 and 6s are older than before.” But that’s obvious, and what’s annoying is that we know people with even older iPhones that are running fine on their original batteries. Reading between the lines, it sounds like Apple is actually saying, “The batteries in these iPhones are underperforming in ways that we didn’t expect and don’t entirely understand.”

If nothing else, that would explain why Apple was relatively quiet about the problem before; Apple’s engineers thought they had more or less taken care of it already, and were taken by surprise as iOS throttled performance more and more to prevent shutdowns.

Although it’s distressing that the situation had to come to a head like this, Apple’s letter to customers is welcome, particularly because it ends with three steps that the company is taking:

To get your battery replaced, visit the Contact Apple Support page, click See Your Products, and sign in with your Apple ID. Select your iPhone and then click Battery, Power, and Charging, then click Battery Replacement, and finally either Bring in for Repair or Send in for Repair. If you’re bringing your iPhone in for a battery replacement, you’ll want to schedule an appointment to avoid waiting.

MacRumors is reporting that Apple will accept an iPhone 6 or later for battery replacement regardless of whether the battery has failed the official diagnostic test, and Apple was happy to send me a box for our iPhone 6 without any questions. However, some users have said that Apple was sticking to the requirement that a battery must retain less than 80 percent of its original capacity to be replaced. It’s possible that’s just a miscommunication between Apple Corporate and individual stores. You can use the free coconutBattery app for the Mac to view your iPhone’s battery
health. 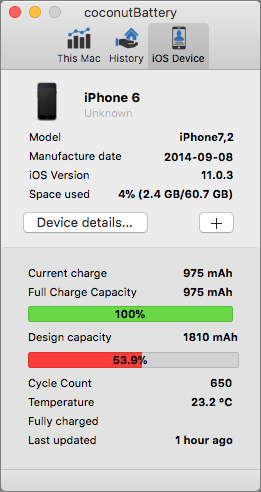 Of course, this situation shows why it would be nice if you could swap batteries on your own. Alas, that ship has sailed for both Apple and nearly all other smartphone manufacturers.