Tuesday’s hot tip for aspiring tech journalists: when interrupting a conversation to ask a quick question, double-check to make sure someone else isn’t filming, lest you appear in full mortification mode in Jeff Gamet’s MacObserver video story.

Rocketbook Notebooks — Rocketbook ? might win my prize for the clever idea done best this year. A Rocketbook is one of several “cloud” notebooks, in which you write or draw with plain old analog pens, pencils, or markers. The bottom of each page has a QR code and several generic icons. In a free iPhone or Android app, you register what you want each icon to do, then tick the icons and scan the page with the app. One icon might send the page by email, another uploads it to Dropbox or iCloud. There are seven different icons and a large menu of services that you can mix and match. Prices range from $12 to $34, including a
notebook you can erase and reuse with a dry-erase cloth, and another that you erase in a microwave(!). If you want to just try it out, grab the free PDFs and give it a spin. 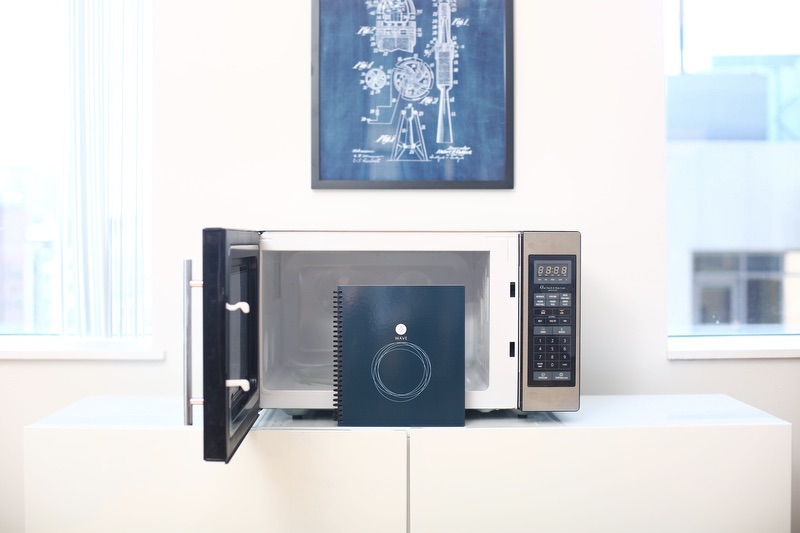 RapidX USB Car Charger — USB car chargers are ubiquitous enough that they’re likely on sale at your local pharmacy, but RapidX has an interesting twist with their X5 ? and X5+ models. The front of the X5 plugs into a car charging port and has two USB-A ports; but what’s unusual is that a four-foot cable connects it to a second adapter with three USB-A ports (X5) or two USB-A ports and a USB-C port (X5+), so people can also use it in the back seat. The $25 X5 is available now; the $30 X5+ lets you unplug the cord when the rear ports are not in use. 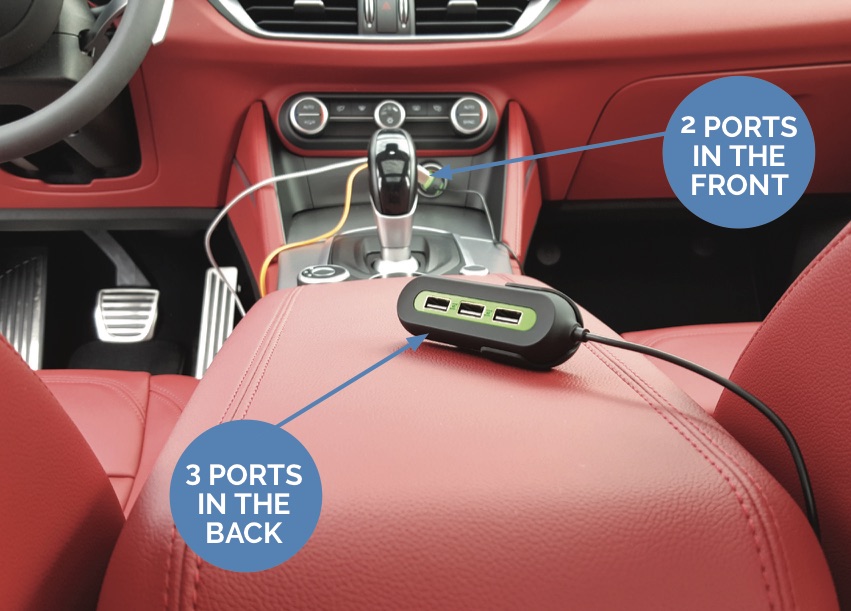 CosmoConnected Bike Helmet — I covered CosmoConnected’s motorcycle helmet last year (see “CES 2017: Cool Products from CES Unveiled,” 5 January 2017). This year they’re adding a bicycle helmet to their lineup. The helmet has embedded front and back LED lights that stay on for visibility and signal automatically when the bicyclist brakes or turns. In the event of an accident, the helmet talks to your phone to call for help. Available in September 2018 for $60; although the company is French, the press release promises U.S. distribution. 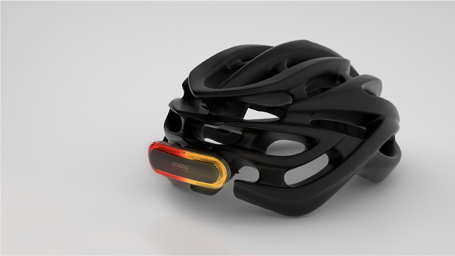 Coros OMNI Bike Helmet — If you want your helmet sooner or more laden with features, check out the Coros OMNI. It includes a bone-conduction headset and forehead-mounted shielded microphone to listen to audio or take calls without impeding ambient sound, and a remote control you clamp to the handlebars. A forward flashlight shows you the road, but unlike the CosmoConnected it doesn’t include turning lights. It also has an emergency crash system to call for help, and since helmets must be replaced after they take an impact, turning in an old helmet gets you a 20 percent discount on a replacement. Available late January 2018
for $199 in a choice of several colors. 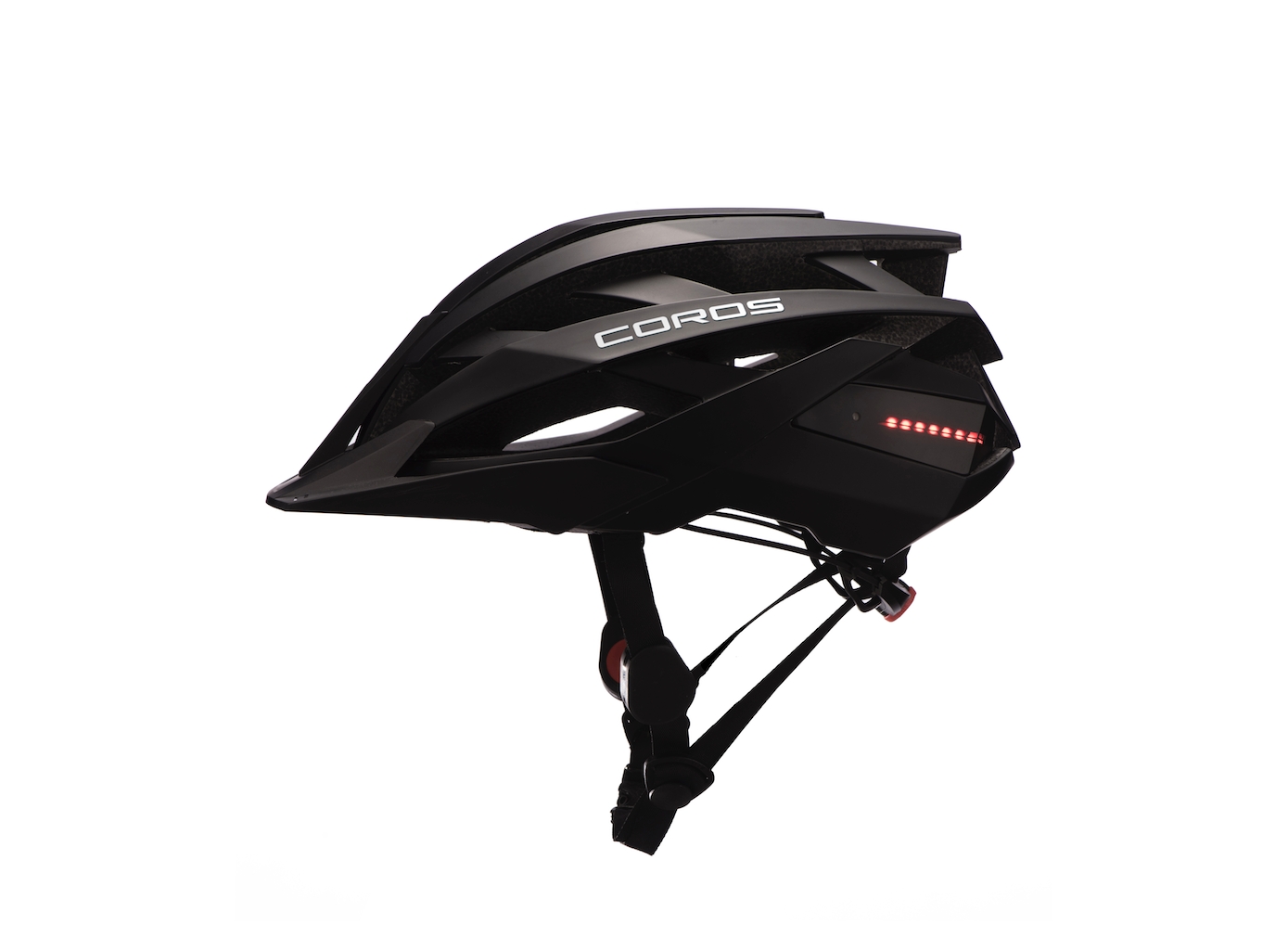 Qobuz Hi-Res Music Streaming — I’ve been unimpressed with various hi-res music streaming services at CES, given studies showing that most people can’t tell the difference. (NPR has a helpful online quiz that tells you whether you can.) My hearing is so poor, I was able to downsample my music to 64 Kbps to fit on my old phone, and it didn’t bother me. But the Qobuz high quality streaming service ? has thought of people like me: the company is partnering with Mimi Hearing
Technologies to provide streaming music adjusted to match frequencies you have trouble hearing. Qobuz is hoping to have this set up in time for a mid-2018 launch in the United States. Prices range from $99 per year to $349 per year; higher-priced plans include higher bit rates and lossless music, but lower-priced plans also have a monthly subscription option. No word on what the cost will be for Mimi enhancement, if any, or if it will only be included in premium plans.

Gnarbox Photo and Video Editor — Serious photographers sometimes find themselves far away from a computer (and civilization, for that matter), and I’ve seen several products at CES that automatically offload photos and video to additional storage. Gnarbox takes that one step further; it’s a ruggedized 1-pound computer that backs up your photos and provides photo and video editing tools, all controlled by your phone. Available now, $299 for 128 GB of internal storage, $399 for 256 GB.

goTenna Mesh — Speaking of being away from civilization, I understand that there are still parts of the world that lack cell phone reception, and which have not yet been paved with asphalt. Enter goTenna Mesh, a portable receiver that talks to other goTenna Mesh devices within range — around 4 miles in open terrain (and 0.5 miles in thick forest) — and allows for either private texts or emergency broadcast messages. GPS locates everyone carrying one on maps, which you download prior to going off-grid. Each device adds to the mesh network, so the more people carrying one (regardless of whether they’re in your group or
strangers), the greater the range of the network, because signals can hopscotch from one goTenna to the next. Encryption prevents anyone but your recipients from reading your private messages. A full charge gets you around 24 hours of use. Available now, sold by the pair for $179 (you need at least two to be useful). 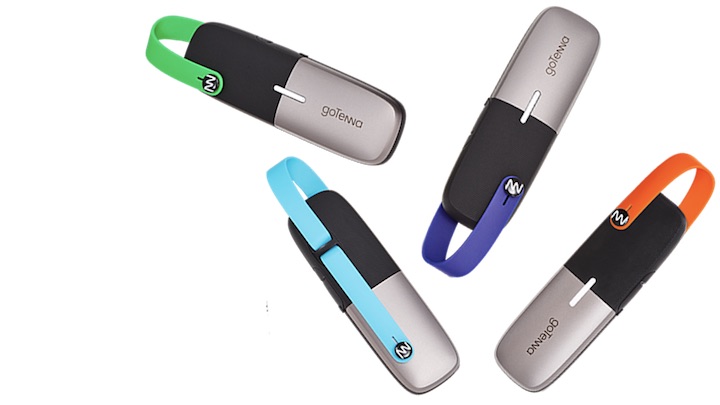 QUARTZ Water Purification Bottle — In keeping with the off-grid theme, the QUARTZ bottle uses UV light to purify water. It has a variety of power modes, starting with “keep this bottle from tasting and smelling wonky,” up to an “adventure mode” to clean water that might come from unsafe sources. This might be useful when you’re away from civilization. A bottle weighs 13 ounces empty, and can hold 18 ounces of water. One charge reportedly lasts 2–3 months. It’ll set you back $99 in April 2018. 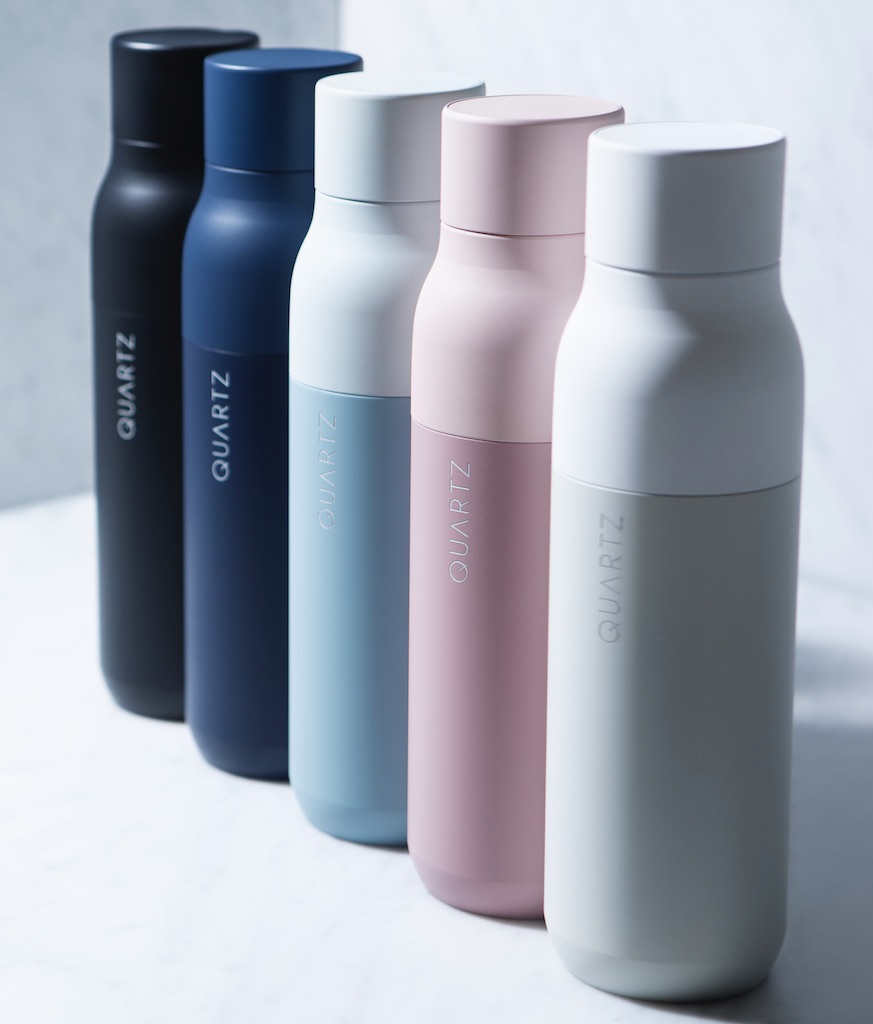 myCharge All Powerful Battery — I’ll admit, there are some products I remember and want to mention just because their names amuse me. The myCharge ? All Powerful is just a great name. It’s a 20,000 mA battery with USB-A, USB-C, an AC outlet, and a Qi charging pad, which you can use to run your gadgets… away from civilization. All of these ports can also be used to charge the All Powerful from another device or wall power. As might be expected, with that many ports, it’s not small. You can buy it for $199 in April 2018. 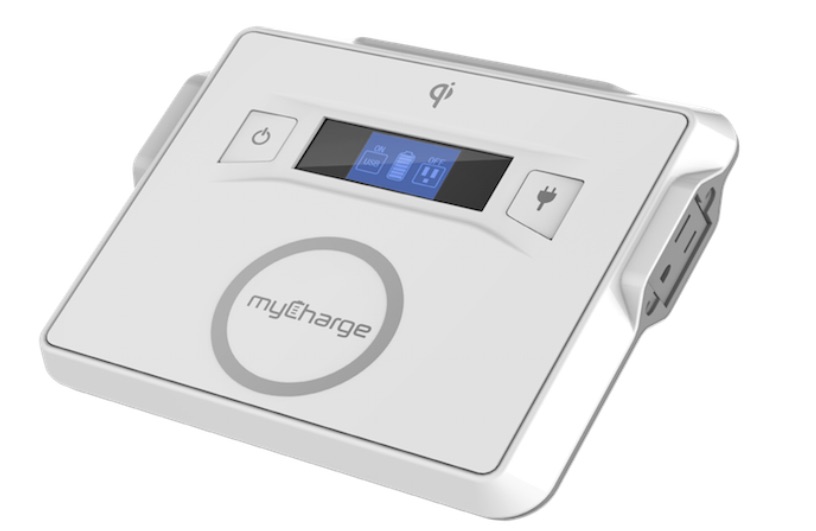 myFC Jaq Hybrid Fuel Cell Battery — Fuel cell power technology has been 5 years away for as long as I can remember at CES; I first wrote about it for TidBITS a decade ago (see “CES 2008 Day 1: Keyboards, Power, Eyewear, and More,” 9 January 2008). It still won’t power our flying cars, but maybe this year it will charge your iPhone when you’re, uh, away from civilization. (That’s the last time I’ll say that, I promise!) myFC is hoping to introduce the Jaq Hybrid later this year: it’s a 2750 mA rechargeable battery with a slot to take single-use fuel cell cards. You
only need a card when you’re caught with a dead battery. The cards contain sodium hydroxide and water; plugging them into the Hybrid powers up the battery in an environmentally-friendly way, even though you’re tossing the card afterwards. myFC is planning the battery to cost $59, and the cards to run $2 each. 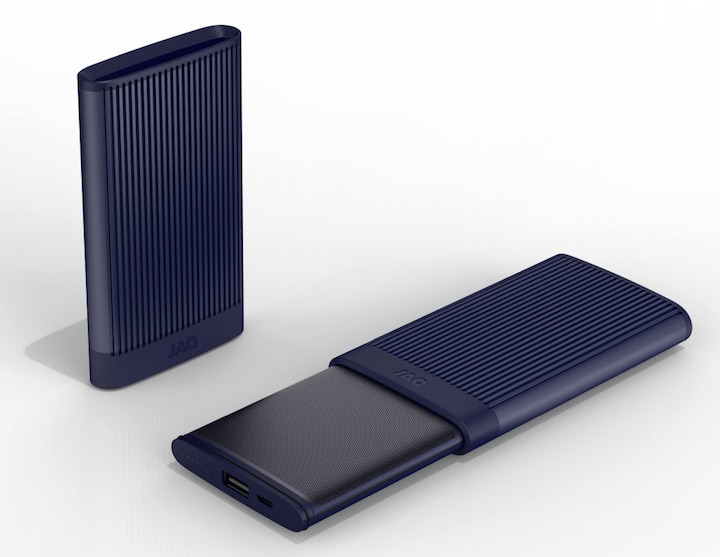 Matias Wired Aluminum Keyboard — Matias has released a backlit wired aluminum keyboard. As the booth rep said to me, “Apple decided to stop making this keyboard in favor of Bluetooth, so we made it instead.” But Matias’s keyboard has an added trick Apple’s never had: a dial that lets you change the color of the backlight. The keyboard sports scissor-switch keys with 2.1 mm of key travel; they feel like a MacBook did in the pre-USB-C days of 2015 and earlier. $99 pre-orders include free shipping, which begin in late February 2018.

BrainTap Headset and Audio Meditation — I’m fascinated by CES products claiming to be neuroscientific, at least in part because so many of them make extraordinary claims that might be entirely due to placebo effect (see last year’s NuCalm entry, “CES 2017: Gadget Finds on the CES Show Floor, Days 1 and 2,” 10 January 2017). Enter the BrainTap headset, a $495 gizmo that flashes red and blue lights into your closed eyes while you listen to a custom audio program covering one of 800 different meditative goals. BrainTap claims to “meditate for you,” which could be useful
because meditation takes a bit of practice. Unfortunately, I’ve done that practice and can enter a meditative state easily and even sometimes accidentally, so I’m unsure whether the lights do anything, or if it just triggered a state I can achieve anyway. The helmet isn’t necessary to sign up for the $10-per-month audio service with access to that library of 800 programs. (If just the audio interests you, I can say good things about a different product, HelloMind’s hypnotherapy app, which I’ve been using since they gave it to me last year; their sleep programs work well for me. See “CES 2017: Gizmos
from the PEPCOM Digital Experience,” 6 January 2017.)

Dreamlight High-Tech Sleep Mask — Runner-up for far-fetched scientific claims is the Dreamlight sleep mask, which among other things, will integrate with your 23andMe genetic testing for sleep advice “tailored to your genes.” More down-to-earth, the Dreamlight is a sleep mask that wraps entirely around your head, and is thick enough to be used as its own pillow in a pinch. It includes audio headphones and embedded lights the claims to guide you into a deeper sleep with the company’s supplied audio tracks (or your own music) and will wake you more gently. Also, the lights provide
“infrared beauty treatment.” I think this is PR-speak for “will lightly warm your eyelids.” You can back it for $100 on Indiegogo starting 17 January 2018; it’s scheduled to ship in April 2018. 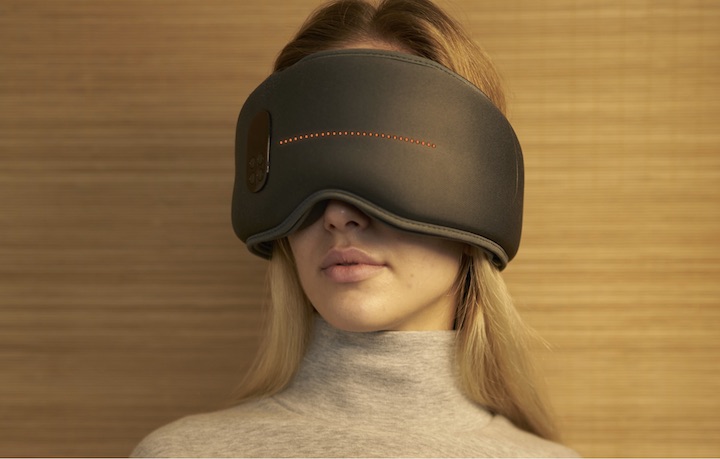 Comments About CES 2018: ShowStoppers Prepares for the Collapse of Civilization