Friday’s hot tip for aspiring tech marketers: if you’re going to loan your motorized ride-on luggage to CES attendees, make sure your booth name is in big honking letters on both sides of the case, so journalists who see them zipping by can find you. I saw such a product but had to go to Google to figure out that it might have been from a company named Modobag.

One of the more eye-catching technologies I saw today wasn’t on the show floor; it was a Willy Wonka slot machine immediately outside. 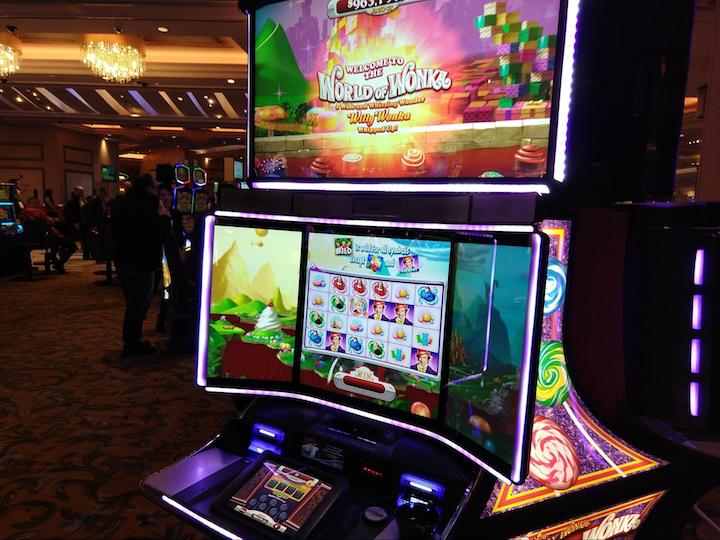 This slot machine features four screens, a tablet for game control in addition to the usual buttons, and a sensor that detects 3D motion gestures in mid-air above the tablet. All of it is in service to capture your dollar-a-spin. It’s fascinating to see how much tech the gambling industry uses to make sure their games remain captivating for people used to video game consoles and big-screen TVs.

Meanwhile back at CES, this article will cover the main floor and a few things I saw elsewhere in separate meetings. In the next piece, I’ll wrap up the show with coverage of Eureka Park, a breakout space reserved for startups that often has the most interesting products.

Other World Computing — Other World Computing, AKA macsales.com, has long been a reliable source for interesting Mac products. The company is celebrating its 30th anniversary this year, which means they’ve been around long enough to remember when a Macintosh IIx was the hot new thing. (And the IIx cost over $16,000 in today’s dollars, making an iMac Pro look like a bargain.)

Last year (see “CES 2017: Gadget Finds on the CES Show Floor, Days 1 and 2,” 10 January 2017), I was most excited by OWC’s announcement of the DEC portable dock for the 2016 and later 15-inch MacBook Pro. It snapped onto the bottom of the laptop and restored a bunch of ports Apple had removed, while adding a few that had never been included. OWC missed their release date last year, but they promise they’re coming out with it “as soon as possible.” OWC is also exploring adding a secondary battery to the DEC and might release a model for the 13-inch MacBook Pro. 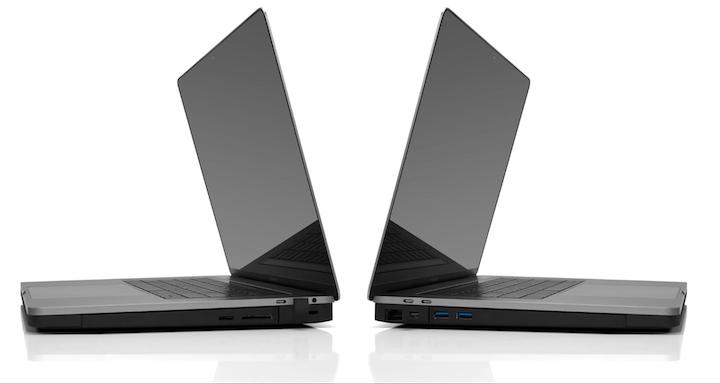 This year, OWC CEO Larry O’Connor was most excited by the release of two high-performance SSD drives: the Viper ThunderBlade and Envoy Pro EX. (One thing I like about OWC: when O’Connor gets excited, he starts reeling off drive statistics at very high speed. That’s my kind of tech vendor.) The ThunderBlade is a four-SSD enclosure meshed into a single volume with SoftRAID, with dual Thunderbolt 3 for daisy chaining. It sports a maximum read speed of 2800 MB/second and write speeds
of 2450 MB/second. Of course, that performance comes at a price, ranging from $1200 for the 1 TB version to $4999 for 8 TB — it’s available now.

If you’re more interested in tons of raw storage, OWC has an upgrade to their ThunderBay 4 RAID enclosure, now with Thunderbolt 3. It also sports dual Thunderbolt ports and even DisplayPort to connect a monitor. They made no mention of read/write speeds, likely because you stock it with your own drives. It starts at $600 for the bare enclosure and $850 for the enclosure with a 4 TB hard drive, available in 4 TB increments up to 48 TB at $3400. 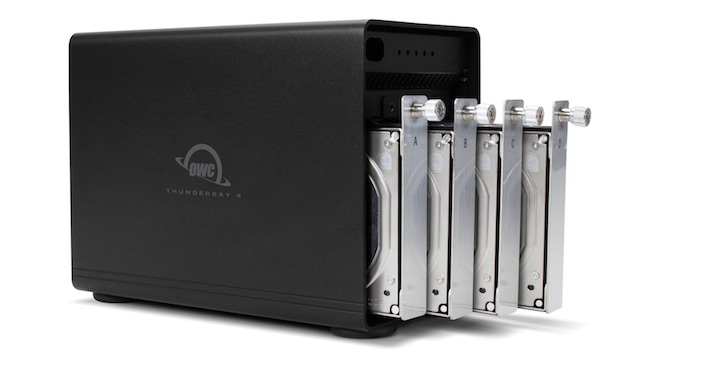 Also available from OWC is the Thunderbolt 3 Dock in silver or space gray for $299, and dual-display Thunderbolt 3 adapters in DisplayPort ($78) or HDMI ($98) flavors. The dock purports to be the first one with the same sensing technology that Apple uses — it will connect to monitors that other docks have trouble seeing. Meanwhile, the dual
adapters sport internal hardware to drive your screens without impacting laptop speed. All can handle dual 4K displays; the dual DisplayPort adapter and dock can also drive a single 5K display.

Finally, I’ll mention the NuGuard KX case for iPhones, not because it’s new, but because during our talk, Larry O’Connor nonchalantly threw his iPhone X at a hardback chair to make a point about the company’s commitment to build quality.

Orbit Bluetooth Trackers for Glasses — For years, you’ve been able to stick Bluetooth-based object trackers like Tile to your keys or wallet, but Orbit has finally delivered what I always wanted: one that fits on the frame of your glasses! Otherwise, they seem to be standard trackers, if a bit pricier than the competition. They come in keyring, credit card, or stick-on formats, which you can track with an app. Some models will reverse-locate your phone by making it ring. They’re available now: $40 for the glasses version, $40
for the card, $30 for the keyring, and $25 for the stick-on model; discounts apply if you buy several.

Sgnl Makes Your Hand into a Headset — The Sgnl is a whizbang idea: replace your current watchband with a $249 Sgnl, and when you take a call, the Sgnl transmits two-way audio through bone conduction in your finger, which you have to put in your ear. But three things occur to me: 1) for $249, you can buy an awfully nice Bluetooth headset; 2) the most natural gesture you make to your face is the international dude-bro symbol for “call me;” and 3) how would you react to someone talking to their hand making the international dude-bro symbol for “call me?” It would get me laughed out of Starbucks. If you can get
past all that, the Sgnl will be “available in a couple of months.” It will come with a connector for the Apple Watch.

ReliefBand Nausea Prevention Wristband — If the thought of talking to your hand makes you queasy, good thing you have two wrists. ReliefBand claims to eliminate or reduce the symptoms of motion sickness by sending electromagnetic pulses through your nervous system. When presented with a claim like this, since I can’t evaluate the evidence myself, I note the answer to my question about proof: “we have years of clinical studies” passes, “we have dozens of anecdotal testimonials” fails. ReliefBand cleared that bar, at least. ReliefBand is available the end of the month for $175; a tube of conductive gel you use with it
costs $15. 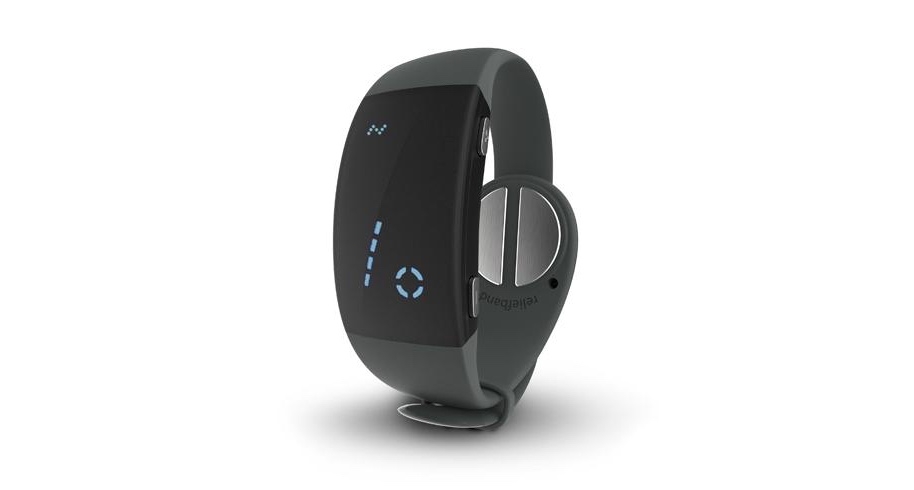 Oska Pulse Pain Relief — Oska Pulse makes another claim I can’t verify, but I didn’t even need to ask the question about proof: they had a four-inch thick binder sitting on their table labeled “Clinical Studies, part 2 of 2.” Pulse uses a technology called PEMF, which is… sending electromagnetic pulses through your nervous system. The Pulse is a rather large rounded oval with a flat side; you strap it on to where it hurts with an included compression band. New at CES is the Oska Pulse Active app, which tracks your pain history and location; this is more useful than it sounds, because doctors regularly complain that
their patients don’t record data well, especially about subjective experiences like pain. But the promotional literature pointed out a problem with the Pulse: one picture shows a woman on the couch with a Pulse on her leg, another picture shows her in the kitchen with a Pulse on her back. That makes sense, because if you had it on your back and were sitting on the couch, it would hurt. Available now for $399, with a 30-day money-back guarantee. 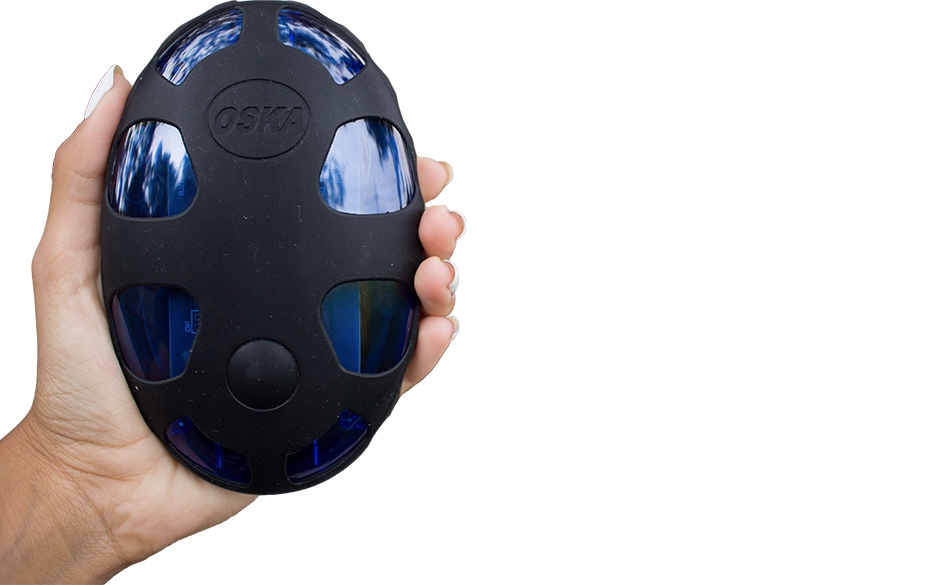 Cue Smoking Cessation App — Kiwi’s Cue ? iPhone and Android apps make a more believable health claim, saying that they’ll walk the user through a self-paced smoking reduction or cessation program. You enter your current daily nicotine stick usage, and a target number you want to get to. Every time you have a cigarette, you note it in the app. Eventually, it starts telling you when you’re “allowed” to have your next cigarette (in quotes, because you can backslide; you just tell the app you have). It figures out when you’re about to smoke based on inductive AI, giving you alerts to maybe skip this one or wait a while
longer. To replace the immediate psychological reward of having a smoke, the app has a point-scoring system when you stick to your plan or delay the next hit — earn a lot of points, and you can cash them in for a few bucks of Amazon credit. Points aren’t worth much, but they offer a tiny endorphin boost for not having a cigarette. Currently in beta, the Web site invites you to sign up for a free trial for when it’s released; my press materials don’t say when that will be, or how much it will cost.

Autonomous SmartDesk 3 — An AI-infused convertible standing desk sounds a little Cyberdyne Systems to me, but the Autonomous SmartDesk 3 has a fascinating feature set geared to keeping you focused at work. At its core, it’s a motorized desk that converts from sitting to standing with a button press. But the AI also suggests when to stand, and not just based on the hour like an Apple Watch. Instead, it figures out the times of day you begin to get distracted or tired, and changes up your work mode to keep you focused. An integrated
tablet can order you anything from a pizza to an Uber ride, and it will figure out when to suggest either based on your workday trends. The app even integrates with a delivery service and your order history so you’re not taking time to choose from a menu, you’re tapping a button to get your favorite. It almost goes without saying that the tablet displays the weather and your calendar, and talks to your smart devices to change the lighting, make coffee, or play music. Available now, starting at $549. 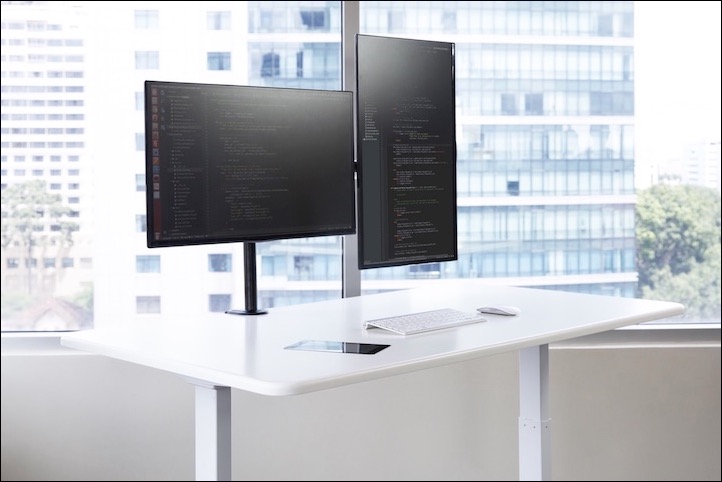 Gamevice — I’m not much of a gamer, but I thought the idea behind Gamevice ? is pretty cool: it attaches a split Nintendo-style controller on either side of your iPhone or iPad. In theory, any app that supports MFi controllers should “just work” with its joysticks, buttons, and pads. When not in use, the iPhone model of the Gamevice folds up into a package about the size of three or four decks of cards. It runs for $80–$100 and is currently shipping. 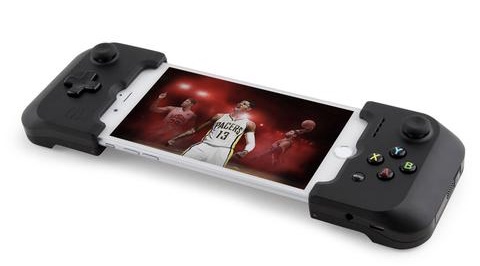 Royole Flexible Displays — Royole has had their Moon wearable 3D video headset on exhibit at several recent shows, but I haven’t covered it because TidBITS publisher Adam Engst annoyingly already has one to review. [Which he hasn’t done yet because Royole only recently released a software update that resolved a show-stopping audio syncing bug with Netflix. -Adam] According to the International Code of Technological Journalistic Ethics, that means I can’t have one. Even so, I was impressed by Royole’s flexible display technology: they have come up with a rollable,
bendable display that is 0.01 millimeters thick. It can be bent to a one millimeter radius without damaging any pixels, and it can reportedly bend 50,000 times before it deteriorates. So far, Royole can produce these “screens” at up to around tablet size, with between 300 and 400 pixels-per-inch resolution. This isn’t something you buy, this is something which might make for some stunning products at CES 2020.

Comments About CES 2018: The Main Show, LVCC, and Sands