Apple has released updates for all of its major operating systems: iOS 11.2.5, macOS 10.13.3, watchOS 4.2.2, and tvOS 11.2.5. The big news for iOS is support for the upcoming HomePod smart speaker (see “HomePod Arrives February 9th, Multi-Room Audio to Follow Later in 2018,” 23 January 2018) and Siri learning to read the news, but otherwise the updates are minor. More interesting are the security notes.

In this case, the details are still reserved, which means they won’t be described until everyone affected has had a chance to release patches. That could imply that the vulnerabilities are quite serious.

Also notable is the fix for the recently reported bug that could cause Messages in iOS, macOS, and watchOS to crash or otherwise fail to work if it received a maliciously crafted URL (see “Messages App Plagued by Another Crashing Link Bug,” 17 January 2018).

Although all of these updates are generally minor, the increased emphasis on security fixes and the severity of recent vulnerabilities suggest that you should update sooner rather than later.

iOS 11.2.5 — The iOS 11.2.5 update is 178 MB on the iPhone X and 163 MB on an 10.5-inch iPad Pro, and you can install it in Settings > General > Software Update or via iTunes. As mentioned, the big news is HomePod support, although the release notes merely say, “Setup [sic] and automatically transfer your Apple ID, Apple Music, Siri, and Wi-Fi settings to HomePod.” 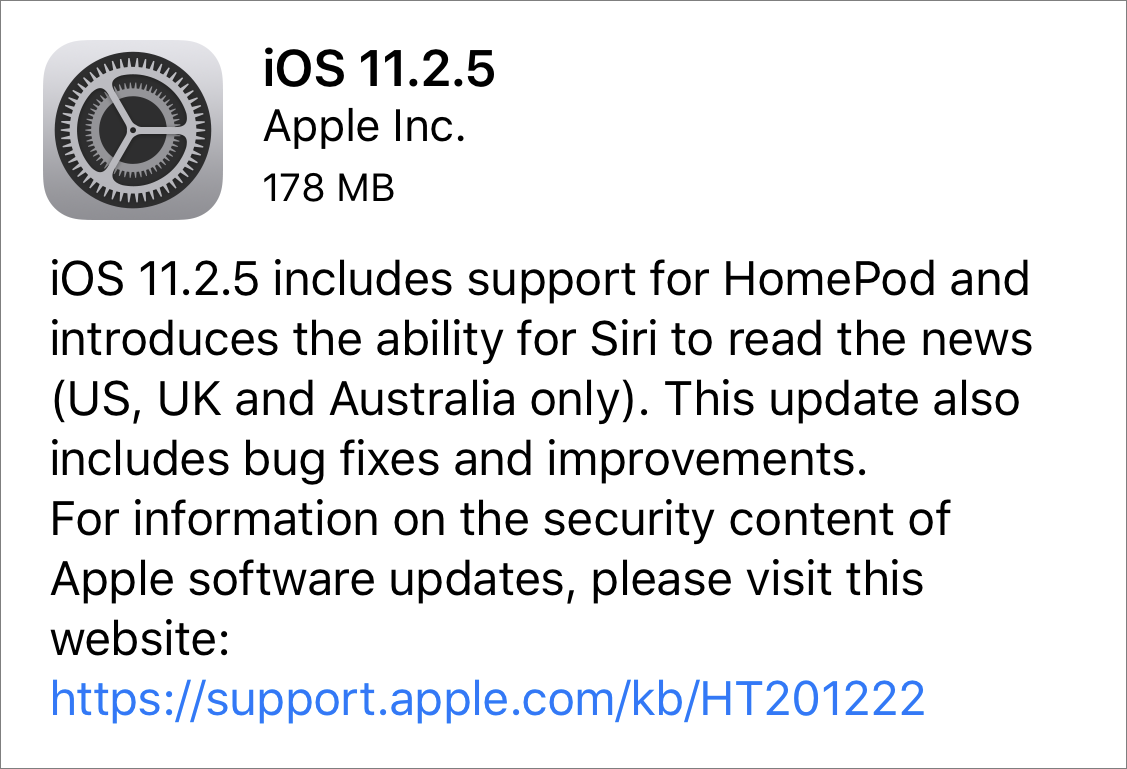 Another new feature is that Siri can now read the news to you if you say “Hey Siri, play the news.” Siri can provide news for specific categories, including sports, business, and music, but Apple apparently hasn’t tweaked Siri’s artificial intelligence to avoid reading you stories that will make your stomach hurt.

When you first ask Siri for news, it launches the Podcasts app to play the latest news roundup from NPR’s feed. If you’re not an NPR fan, you can tell Siri to switch to Fox News, CNN, or the Washington Post. Sports news comes from ESPN by default, but you can opt for NBC, and business news comes from CNBC. If you ask for music news, Siri instead opens the Music app to play the Beats 1 Best of the Week. For other topics, Siri looks to other podcasts, but the results can be pretty random.

The iOS 11.2.5 update also fixes a potpourri of issues that:

Finally, iOS 11.2.5 addresses ten security vulnerabilities, including those mentioned above.

macOS 10.13.3 — The macOS 10.13.3 update clocks in at a whopping 1.97 GB in Software Update, but lists only two bugs that aren’t related to security. One fixes a problem that could cause Messages conversations to be listed out of order, and another corrects a bug that could cause your Mac to freeze when connected to an SMB-based file server.

As best we can guess, the large size of the update may be due to the location of the 15 security vulnerabilities fixed, which include a handful of problems in the kernel.

watchOS 4.2.2 — In its release notes, Apple says merely that watchOS 4.2.2 “includes improvements and bug fixes.” It’s clear that the update is important solely for the security fixes noted above. We recommend installing it the next time you charge your Apple Watch overnight since watchOS updates are so slow to install.

watchOS 4.2.2 is a 56.7 MB download that you install via the Watch app on your iPhone (in Watch > Settings > General > Software Update). Remember that the Apple Watch must be on its charger, charged to at least 50 percent, and within range of your iPhone, which itself must be on Wi-Fi.

tvOS 11.2.5 — Finally, Apple has released tvOS 11.2.5, which “includes general performance and stability improvements.” You can install it on the Apple TV 4K and fourth-generation Apple TV via Settings > System > Software Updates > Update Software.

As with the other operating systems, security is the main reason to update to tvOS 11.2.5, which includes 11 security fixes.