Rogue Amoeba’s new Farrago is a powerful soundboard application for the Mac. If you aren’t familiar with the concept of a soundboard, it’s a tool that lets you assign various sound files to buttons in a grid, after which you can play them with the press of a key or a click of the mouse. The idea is that you can trigger one or more sounds at any time, in any order, as needed while recording a podcast, performing live, or just for fun. 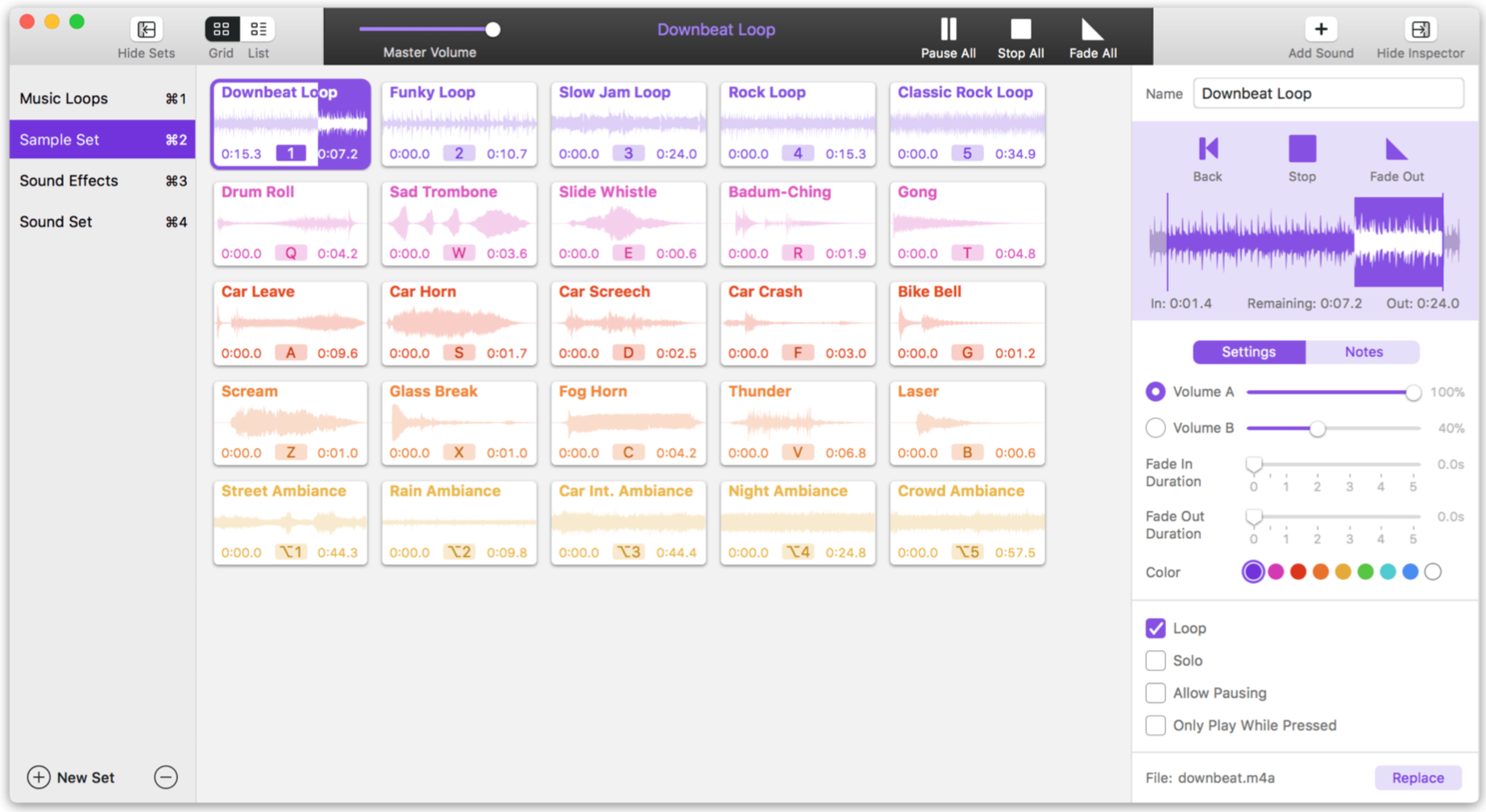 To get started with Farrago, you create a new sound set, which can contain up to 80 individual tiles. Each tile consists of an individual audio file, as well as related controls for playback. Then you import sounds by dragging their files into Farrago’s main window, which adds them to whichever set you have selected at the moment. Farrago supports the expected formats like MP3, AAC, Apple Lossless, and WAV, as well as less-common ones like Ogg Vorbis and Real Audio. In short, it should handle whatever sound files you throw at it.

Farrago stores its own copy of your sound files, so you won’t lose your sounds if you move the original file to another Mac or share it with a friend. You can color-code sounds for organization and assign each sound 1 of 80 possible trigger keys on your keyboard (40 keys by themselves and those same 40 with the Option key). That lets you trigger all your sounds simply by typing letters, numbers, or punctuation. Since Farrago can hold as many sets as you like, if you were using Farrago to manage audio effects for a play, you could create a different set for each scene.

Each sound has its own settings, including two different volume levels you can toggle between, fade in and fade out times, and a start and stop point in the sound in case you want only a small portion of a larger clip. You can configure whether a sound should loop until you stop it, whether a paused sound should resume from the paused point or start over from the beginning, and whether the sound should be played solo, stopping all other playing sounds when triggered. Finally, you can configure a sound to play only while the trigger key is held down.

In addition to the grid layout, Farrago provides a list view that’s handy when you need to play your audio clips in order. It doesn’t change how the application performs but it makes it easy to play each sound in turn, as you might need to do as a play progresses.

Farrago comes with a small set of fun sample sounds. You can record your own or add sounds from public online libraries such as FreeSound.org or ZapSplat. Just be sure that you either have or do not need a license for any sounds you use in any audio you publish or perform.

Rogue Amoeba says Farrago is designed for podcasters and those managing live performances, and I can see the utility to both audiences. I participate in a community theater, and when I am not on stage, I like to work in various technical capacities including running sound for shows. I immediately saw how I could put Farrago to use when triggering sound effects. It responds instantly to key presses, which is essential if you need to match, say, a gunshot sound with an actor’s movements on stage.

As for podcasts, Farrago enables a freeform style of podcasting where you insert intro/outro music, sound effects, and even interview clips on the fly while you record yourself speaking live. That might require some practice, but it would likely be faster and easier than arranging everything carefully in an audio editor like GarageBand.

I can imagine other uses for Farrago too. You could use it to play ambient sounds and music to add mood and tension to role-playing games like Dungeons and Dragons. Or you could increase the scary quotient of your next Halloween with appropriately spooky sound effects, triggered manually at just the right time for approaching trick-or-treaters. Or, if you host a bar trivia event (such as Geeks Who Drink), you could use it for any number of fun and silly sound effects during the game.

Farrago is the nicest soundboard implementation I have seen, and I encourage you to think about how you might be able to use it to enhance your world with sound effects.