For those who are tired of paying a cable or satellite company for TV, there’s yet another skinny bundle Internet TV package, Google’s YouTube TV, which joins the likes of Sling TV, DirecTV Now, and PlayStation Vue. It costs $35 per month now, and will be going up to $40 per month soon, but if you sign up before 13 March 2018, Google says you’ll be grandfathered into the $35 price indefinitely.

Make sure to sign up via the Web site and not from the iOS app, because Google charges $39 instead of $35 from within the app. (Presumably to make up for Apple’s cut of the in-app purchase, but it’s still shady.)

YouTube TV isn’t at all new. In fact, it’s about a year old. But only recently did Google release the YouTube TV app for the Apple TV, which brought it above the bar necessary for us to cover in TidBITS. So far, I’ve been impressed with what I’ve seen. Unfortunately, to subscribe to YouTube TV you must live in one of its viewing areas, all of which are in the United States. Sorry, international readers.

In addition to the Apple TV app, YouTube TV is also available for iOS, Chrome, Android, Chromecast, and a handful of other platforms. It’s also integrated into the Google Home line of smart speakers, so if you have one of those and a Chromecast-connected TV, you can say stuff like “OK Google, play CNN” to watch the news.

Channel Lineup — Although all the Internet TV services are roughly similar, they do differ somewhat in what channels they offer and what features or design elements they emphasize. YouTube TV focuses on simplicity. While Sling TV offers lots of packages (see “Sling TV, a Cord Cutter’s Delight, Arrives on Apple TV,” 6 July 2016), YouTube TV offers just a single plan, though you can also subscribe to a few premium channels: Showtime, Fox Soccer Plus, Shudder, and Sundance Now. There’s no HBO, but that’s what HBO Now is for.

Along with most of the channels you’d expect, such as ESPN, Fox News, and MSBNC, YouTube TV has just added Turner networks, including Adult Swim, Cartoon Network, CNN, TBS, and TNT. It will also soon offer NBA TV and MLB Network.

Which channels you want is highly personal, but here are a few notable channels that are missing: BET, Food Network, Hallmark, MTV, and Nickelodeon. If you’d like to watch those, look elsewhere for now. Personally, I subscribe to a service like YouTube TV purely for live news and live sports. I can watch scripted content on services like Hulu and Netflix later.

What impressed me about YouTube Now’s lineup is that it provides all the major local network channels in the Nashville area: ABC, CBS, Fox, NBC, and the CW. YouTube TV is the only one of these services that does so well in this part of the world. Your mileage will likely vary. Unfortunately, there is no easy way to check which channels are available in your area until you sign up for service. You can cancel before finishing the signup process, and there is a 7-day free trial in any case.

Because the TV industry is a legal minefield, there can be some weird exclusions. For instance, you may not be able to watch NFL games on Fox:

You also can’t view NFL games on mobile devices due to the NFL’s deal with Verizon Wireless. But otherwise, I’m pleased with the sports lineup, since it has the Fox Sports channels that are essential for Atlanta Braves baseball and SEC Network to watch University of Tennessee football. Again, your desires will likely differ. But if you’re looking for some speed skating or luge in the Olympics, YouTube TV has everything you need for that: NBC, CNBC, NBC Sports, NBC SN, and the Olympic Channel.

YouTube TV also has an exclusive benefit, in that it lets you watch YouTube Red original shows for no additional charge. Frankly, I don’t care and you probably don’t either, but it’s there if you want it. One thing I don’t understand is why YouTube doesn’t bundle YouTube Red — which combines ad-free YouTube, background audio, Google Play Music, and other features in one monthly fee — with YouTube TV. It seems like a missed opportunity.

Interface — First impressions count, and YouTube TV does it right on the big screen by directing you to visit a URL on a computer or phone to activate the app. That’s vastly preferable to trying to type in a (long and random) password on the TV screen with a Siri Remote. In iOS, it’s even easier if you’re already signed into another Google app — just choose the account you want to use and you’re done.

What’s most striking about YouTube TV is how clean it is. If you’re used to bad cable and satellite box interfaces, YouTube TV is a revelation. It has just three screens: Home, Live, and Library.

The Home screen displays programs Google thinks you’ll like, along with popular shows in different categories. 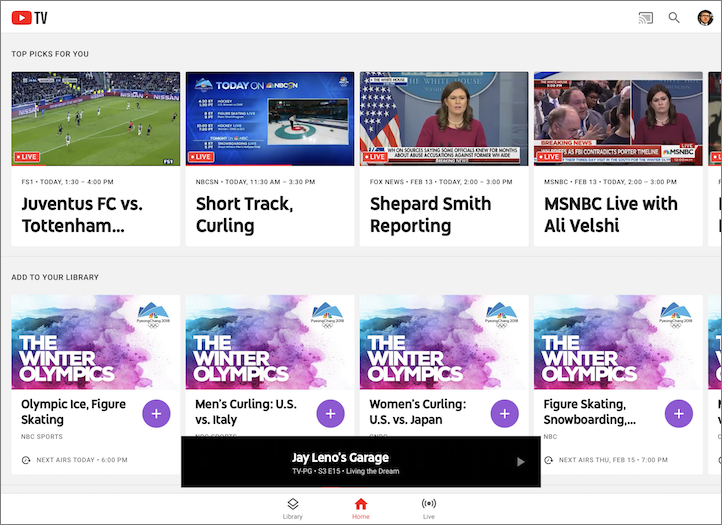 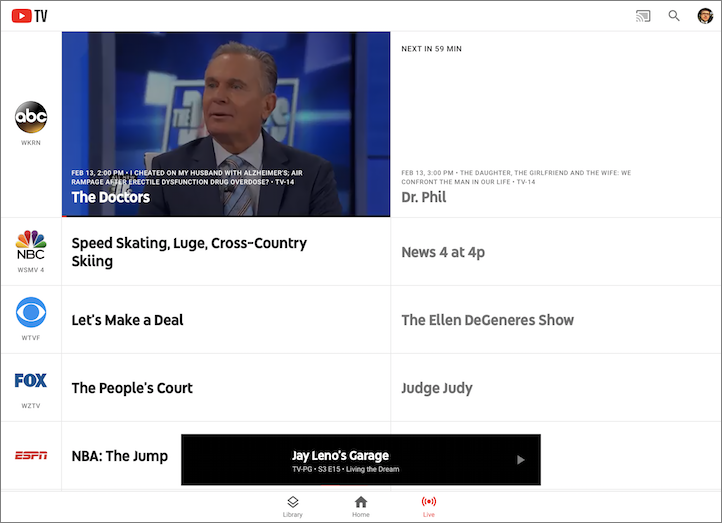 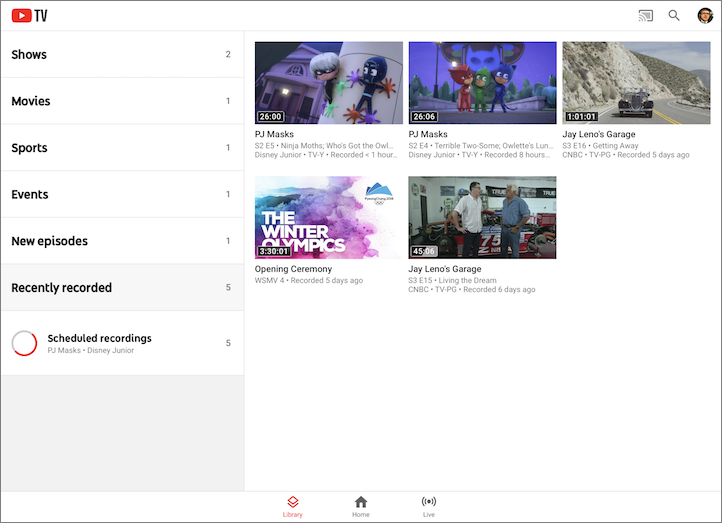 Some have complained that the YouTube TV interface isn’t optimized for each device, which baffles me. Check out the screenshot of the Library screen on the Apple TV below and note that, while it’s showing the same information as the iPad screenshot from above, it’s optimized for the Apple TV interface. I’ve tried YouTube TV on an Apple TV, iPhone, iPad, and even an Android TV, and while it’s a little different on each platform, never so much so that it’s confusing. 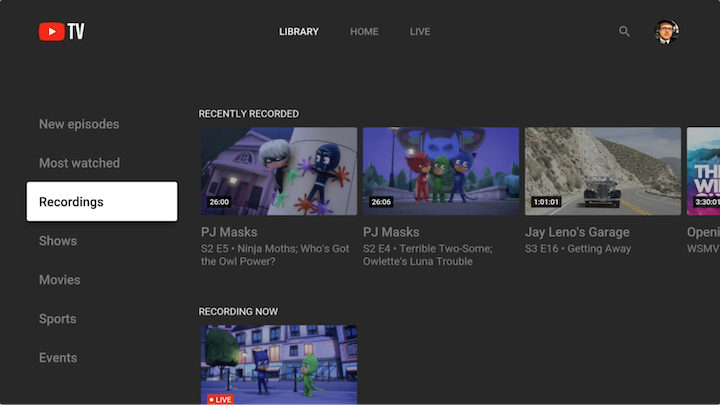 In summary, it feels like YouTube TV’s user interface is working with you, rather than forcing you to fight with it every step of the way. Perhaps it’s not surprising, since Google undoubtedly has a large design team, whereas most other TV services — Internet or traditional — have long employed color-blind marmosets to design their interfaces.

Features — YouTube TV is more than just a pretty face — it’s also one of the most capable of the Internet TV services.

YouTube TV features a cloud DVR to record programs with no storage limits — YouTube TV stores your recorded programs for up to 9 months. You can record as many programs as you like at the same time, and you’re also free to skip ads on recorded content. Amazingly, cloud-based DVR isn’t yet standard for all of these services, and it often isn’t as well implemented as what Google has done.

It should come as no surprise that YouTube TV, being owned by Google, has the best search of any of these services. And it’s not just about finding programs, but what you can do with them. For instance, if you search for a sports team and add it to your Library, YouTube TV will automatically record every game and suggest it in your Home screen, as it has done with the Atlanta Braves below. 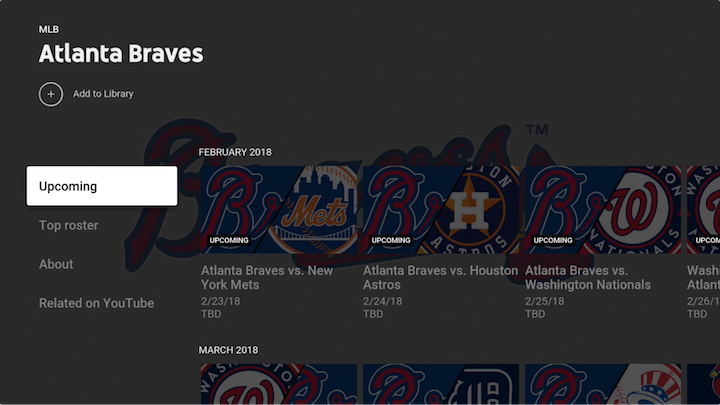 Finale — Overall, YouTube TV looks and performs well. Even on my slow Sony TV running Android TV, it performed admirably. However, it is missing some key channels. Nor does it support Apple’s single sign-on feature, which lets you authenticate multiple TV provider apps at once. However, in my experience, that feature often doesn’t work like it should.

Sadly, I think I’ll be without YouTube TV for a while, as I couldn’t resist an offer from DirecTV Now that promised a free $179 Apple TV 4K if I prepaid for three months of service, which was just $115 after taxes and fees. I hadn’t previously used DirecTV Now, so I was filled with almost instant buyer’s remorse when I saw how slow, frustrating, and outdated its interface is, despite offering a larger lineup of channels. In fact, it’s so disappointing that I may pay up for YouTube TV anyway and write off my DirecTV Now subscription as a cheap Apple TV.

But what’s wonderful about living in the this era is that you’re no longer locked to cable and satellite giants like Comcast, Dish, and DirecTV — at least as long as you have a decent Internet connect. There are a slew of TV services now, competition is fierce, and you can jump between them as you please.