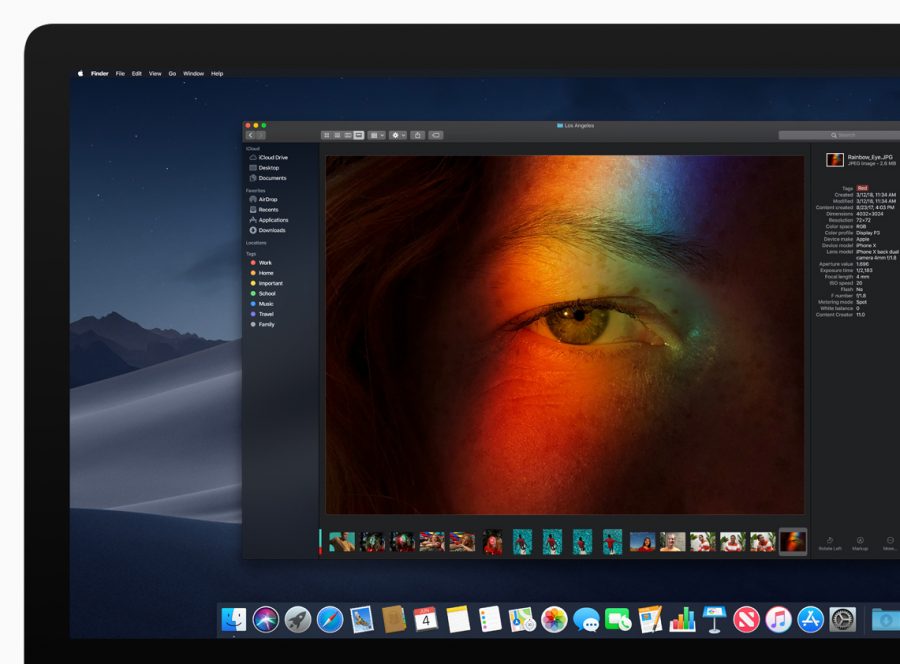 More than an hour and a half into the WWDC keynote, Apple’s senior vice president of Software Engineering, Craig Federighi, gave an overview of the next macOS that described an operating system that was once again more a matter of buff and polish than new features. In fact, he described the changes in macOS 10.14, called Mojave (pronounced mo-HA-vay) after the southern California desert known for its Joshua trees and aridity, as consisting largely of “pro features that everyone will enjoy.”

In fact, that seems to be the case: Mojave doesn’t look much different than previous versions of macOS—that is, until you enable its marquee feature, Dark Mode. This affects the appearance of the menu bar, menus, and Desktop, as well as of any apps that have made use of the new Dark Mode API provided by Mojave. Enable Dark Mode and the difference between macOS 10.13 and 10.14 is as plain as night and day.

Indeed, Dark Mode is one of those features that pro users of photo- and video-editing apps have long requested, and one that many non-pro users might want to use. Apple describes the feature as a way of reducing distractions and helping users focus on the task at hand.

It uses a darker color palette for all windows, views, menus, and controls, and it employs vibrancy adjustments to provide contrast between foreground and background elements.  Until developers hop aboard the Dark Mode bandwagon, however, apps that will include Dark Mode designs when Mojave ships will likely be mostly the Mac mainstays such as Mail, Messages, Maps, Calendar, and Photos. How fast developers adopt Dark Mode depends on how easy it is to incorporate the Dark Mode API into existing apps. Furthermore, it remains to be seen, literally, how Dark Mode will work with multiple desktops in Mission Control, and how distracting a screen will look when containing windows from both Dark Mode-savvy and older apps.

Along with Dark Mode comes a cosmetic companion: Dynamic Desktops. These are Desktop backgrounds that change appearance depending on the time of day—for example, a desert scene in daylight that gradually transitions to the same scene at night. So far, it seems that Apple will be the sole provider of these animations, and users won’t have to worry about their cat wallpaper pictures becoming dark and strange after the sun goes down.

Stacks and Other Finder Enhancements

Another change users may appreciate is the new Finder stacks capability (not to be confused with the Dock’s stacks). Users who have files scattered around the Desktop can use this feature to organize those icons by file type, date, tag, and other criteria into neatly arranged stacks that, when clicked, expand across the Desktop to show their contents. Users can also “scrub” the pointer across a stack to reveal and access individual items in it one by one.

While some might find the Desktop-tidying effect of stacks a quick and pleasant way to clean things up, others who rely upon visual memory to find commonly used items may find the command much less useful, and, in fact, counter-productive to use.

More generally useful may be Mojave’s replacement for the Finder’s Cover Flow view, now called Gallery View. The view seems optimized for navigating folders of graphics by presenting the contents with an expanded view of the current item filling most of the Finder window. A row of thumbnails below it represents other items in the folder, and a preview pane to the right provides complete file metadata information, similar to Get Info. The view also offers a collection of Quick Actions for you to modify the selected file without opening an app. For example, an image file might have actions for rotating it, marking it up, or converting it to another image format. You aren’t limited to Apple’s set of Quick Actions, as you can create Automator tasks to perform Quick Actions as well. 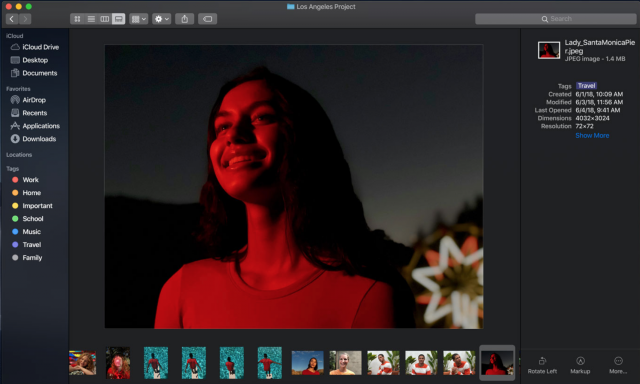 Quick Look has also been enhanced to allow you to perform actions on many types of files, such as markup, image rotation, and file sharing. The actions provided in Quick Look vary depending on the type of file you are viewing.

Apple has significantly enhanced its native screenshot capabilities. Now when you press the screen capture shortcut, you get a palette of different screenshot tools. You then click to choose whether to capture the screen, a window, or a selection—or to record a movie of your actions. With the last, you can record the whole screen or a selected portion. You can specify a custom destination for your screenshot or leave it in a thumbnail on the Desktop where you can immediately perform actions on it, such as marking it up, sharing it, cropping it, or deleting it if it isn’t what you intended.

Related to screenshots is Continuity Camera. This lets you use an iOS device’s camera with Mac apps. For example, you can shoot a photo of a receipt on your iPhone and have it appear—straightened and ready to use—on your Mac Desktop as a PDF, or you can choose Insert Photo from the Mac version of Pages and then take a photo with your iPad to supply the photo. Certain Mac apps will come with the Continuity Camera capability built-in, including the iWork apps, Mail, and Notes.

Federighi posed the question “Is Apple combining macOS and iOS?” and immediately answered it with a resounding “No!” But that doesn’t mean that the two operating systems won’t be connected in new and interesting ways. Continuity Camera, described just above, is one of those ways. Another is the Group FaceTime call capabilities that both iOS 12 and Mojave offer: with it, a FaceTime chat can include as many as 32 participants. In a group FaceTime chat, the app smartly highlights the participants who are currently speaking—a virtual Thanksgiving dinner in the U.S. this autumn might be a perfect venue for taxing that capability!

Apple is also working on making it easier for developers to design apps that can work on both macOS and iOS. The plan is to migrate some of iOS’s UIKit framework to macOS so that, say, a finger gesture in iOS can be seen on the Mac as a trackpad gesture. This year, Apple is testing this strategy out on their own apps: four iOS apps—News, Home, Voice Memos, and Stocks—have undergone the sea change to make them into Mac apps as well. Once Apple proves and refines the strategy, it plans to make the necessary frameworks available to developers in 2019.

A Grab Bag of Assorted Changes

Lots of little changes and improvements are coming out of the shade into the bright light of the Mojave sun as well:

One user-facing feature of interest to developers will be the revised Mac App Store, which offers better discoverability and highlighting of apps, and the capability of asking for ratings and reviews from within an app (a feature this writer hopes will seldom be invoked). Apple, however, remained silent in the keynote about many features for which developers have long clamored, such as the ability to offer paid upgrades.

Other features are more invisible to users, but of great interest to developers. Among them:

So central is Metal to Apple’s future, in fact, that it is deprecating both OpenGL and OpenCL in Mojave and is restricting Mojave to Macs that can use Metal: that is, Macs released in mid-2012 or later. Otherwise, unless you have an old Mac Pro that has been upgraded to use a Metal-compatible GPU, you won’t be visiting the high desert anytime soon if your Mac was made prior to 2012.

Mojave is mostly an evolutionary update to macOS. Nothing in it is particularly surprising, but most of what it offers will be welcome to a wide range of users. Apple seems focused on refining and enhancing macOS right now, rather than completely rebuilding it, and most of us think that’s a good thing.

One final caveat: even if you can get your hands on the developer release of Mojave that Apple released today, we strongly recommend you resist the temptation to install it on any Mac that you need to use for anything other than experimentation. Did we say “strongly recommend”? We meant “will laugh callously at your sorrow if” you do such a foolish thing.

Comments About The Big News about macOS 10.14 Mojave Is Dark