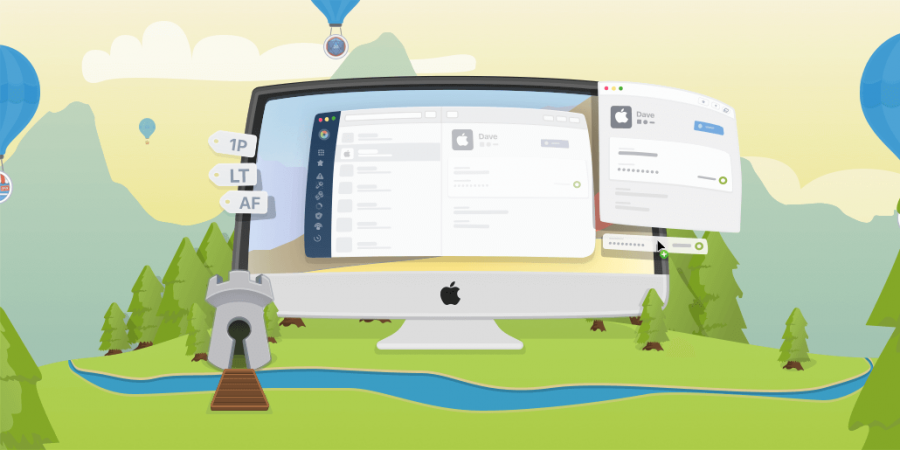 In 2011, I bought 1Password from the Mac App Store, and ever since I’ve been using the Mac version without being prompted to pay a penny more. That changed with 1Password 7, the first paid upgrade from AgileBits in years.

The good news is that you can pay a flat fee for the upgrade. Yes, you are somewhat encouraged to sign up for one of AgileBits’ subscription plans—which bundle app access for all platforms, sync, and other features—but you also have the option to purchase a single-user, single-platform license for $49.99 when you first launch 1Password 7. So if you’re a fan of 1Password but dislike subscriptions, I recommend paying up. And soon—$49.99 is a launch special that will eventually rise to $64.99.

(AgileBits gave me a free subscription to a 1Password family plan so I could review 1Password 7. But as I said above, I’ve been a paying customer for years and would be using the app even if I had to pay for it.)

It’s interesting that AgileBits chose 1Password 7 as its first paid update in years since the most notable change is aesthetic. AgileBits has finally completed its slow pivot away from 1Password’s earlier metallic, almost industrial look, leading to a fresh design that is both flat yet bright. 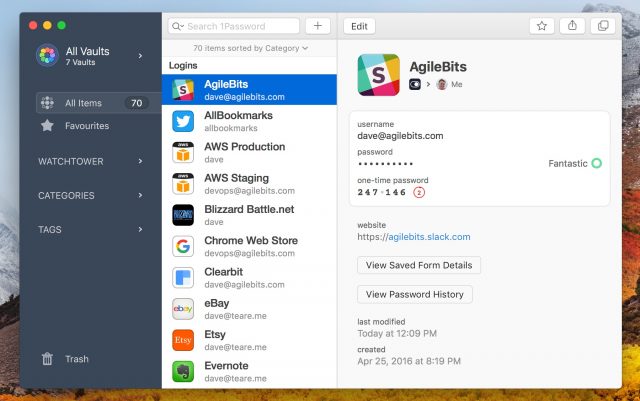 That careful evolution has paid off since 1Password 7 avoids many of the missteps associated with flat design—thin, wispy type, vague interface elements, and a lack of contrast (think back to the transition from iOS 6 to iOS 7).

1Password’s readability is helped by the new Courier Prime Bits typeface used to display passwords; it’s a custom offshoot of the free Courier Prime typeface. Font nerdery is often superfluous, but it matters in an app where you have to be able to accurately transcribe each letter in a password.

One significant design change is the new sidebar, which is easier to read. For example, it makes it much more obvious that you can show and hide sections, since arrows replace the vanishing Show and Hide text labels. You can also shrink the entire sidebar down into an icon-only view.

But perhaps the most significant overhaul is the refreshed 1Password mini.

The new 1Password mini is also a lot more powerful than in the past. It can recommend logins not just for Web sites you’re visiting, but for the current app. You no longer have to copy and paste from 1Password mini to the password field since AgileBits added support for dragging content. You can also drag logins inside the app to move them between vaults.

I’ve long used 1Password’s Secure Notes feature to store freeform secure data like recovery keys, HomeKit codes, and serial numbers. But 1Password’s notes were always bare bones, with no formatting options. That has changed with the addition of support for the Markdown plain-text formatting language in 1Password 7.

While editing a note, you can click a link below the input field to view a Markdown reference. As you can see, using Markdown formatting can make your notes much more readable.

Nested Tags and the Death of Folders

Another new feature is nested tags. Tags are nothing new to 1Password, but now you can nest 1Password tags just like folders in the Finder by separating the tags with a forward slash instead of a comma. For instance, I can create a TidBITS/WordPress tag, which shows up like this in the new sidebar: 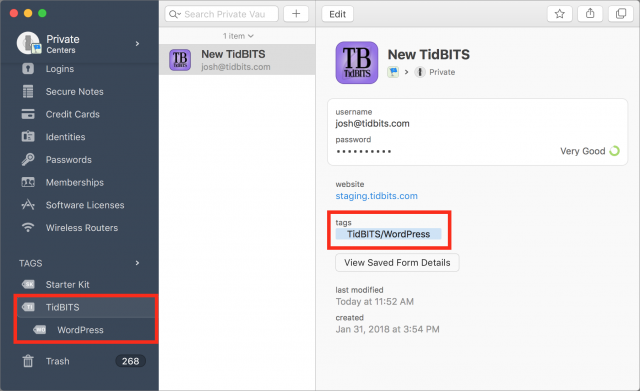 Nested tags seem aimed at larger organizations that need help categorizing their logins, but they will also be appreciated by anyone who prefers to organize their data hierarchically.

Watchtower debuted in 1Password in response to the Heartbleed vulnerability (see “1Password 4.4 Updated with Watchtower Service,” 2 May 2014), and AgileBits has given the password monitoring service a boost with 1Password 7. It now integrates with haveibeenpwned.com to check for compromised logins and twofactorauth.org to see which of your logins support two-factor authentication but don’t have it enabled. Of course, if you use a different app to manage your two-factor authentication tokens, that warning won’t do much good. Watchtower also warns you about logins that use unencrypted HTTP connections and about items that can expire, like credit cards. 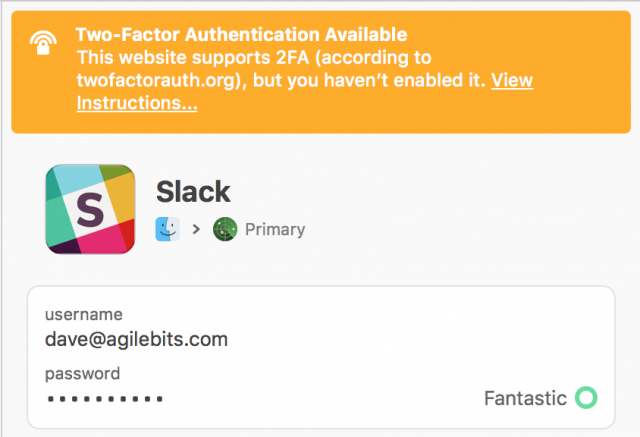 Another nice touch is the redesigned password strength indicator, which gives you feedback about how strong your passwords are (Fantastic in the screenshot above).

AgileBits has been busy updating 1Password 7 since its release in late May. The 7.0.1 update, released on 24 May 2018, improved the initial setup steps, let you use Command-L to bring up the vault list in 1Password mini, helped you convert HTTP URLs to secure HTTPS ones in Watchtower’s Web site warnings, and improved the speed of keyboard navigation. Version 7.0.2, released on 29 May 2018, improved unlocking performance on large data sets, added Amazon Workspaces as a supported app, adjusted the vault list width according to its contents, improved setup for users who already have a 1Password license, and made some cosmetic changes. 7.0.3, released 31 May 2018, added nested tag support to 1Password mini, along with support for the ExpressVPN app. Finally, 1Password 7.0.4, released 4 June 2018, improved the speed of checking for vulnerable passwords and fixed a few bugs.

Is the Upgrade Worth It?

As you can tell, many of the changes in 1Password 7 are aimed at improving the user experience or are largely cosmetic. Is it worth the upgrade? I’ll break it down into three audiences:

Overall, the changes to 1Password 7 are both positive and welcome, and while only you can decide if the upgrade is worth the money right now, the app remains an essential tool in the Mac universe.