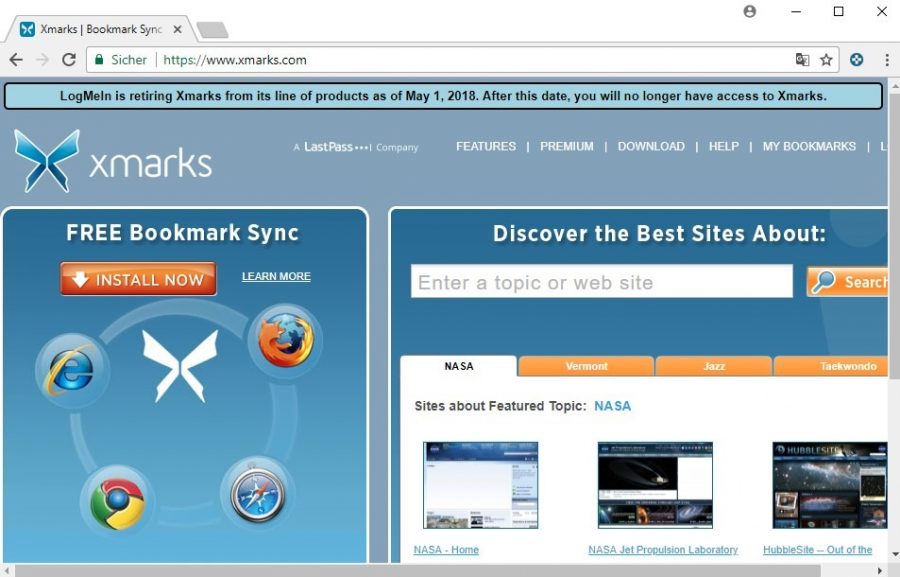 If you’ve been using the Xmarks service to sync bookmarks across browsers and platforms, you may have wondered why it hasn’t been working of late. It turns out that Xmarks is pushing up daisies, since parent company LogMeIn shut it down on 1 May 2018 with just a month of warning. TidBITS reader Gib Henry alerted us to this situation, noting that when he complained, he was told that users had been sent an email on 30 March 2018, although he hadn’t received anything.

Bookmarks synced by Xmarks remain accessible everywhere they are currently, but no future syncing will occur, so you should remove Xmarks from your devices. If you’re looking for replacements, Ghacks lists several options, but none appear to offer the same breadth of browser and platform support as Xmarks.

Xmarks, originally called Foxmarks, originated in 2006 from a company founded by Mitch Kapor (of Lotus 1-2-3, EFF, and Mozilla fame). Despite racking up over 15 million downloads by April of 2009, Xmarks’ reliance on voluntary donations wasn’t sufficient to keep the service alive, but it was rescued from oblivion in 2010 when password-management firm LastPass acquired it. When LogMeIn bought LastPass in 2015, LastPass said that they planned to continue supporting Xmarks. Was there ever a viable business model behind cross-browser and platform bookmark syncing?