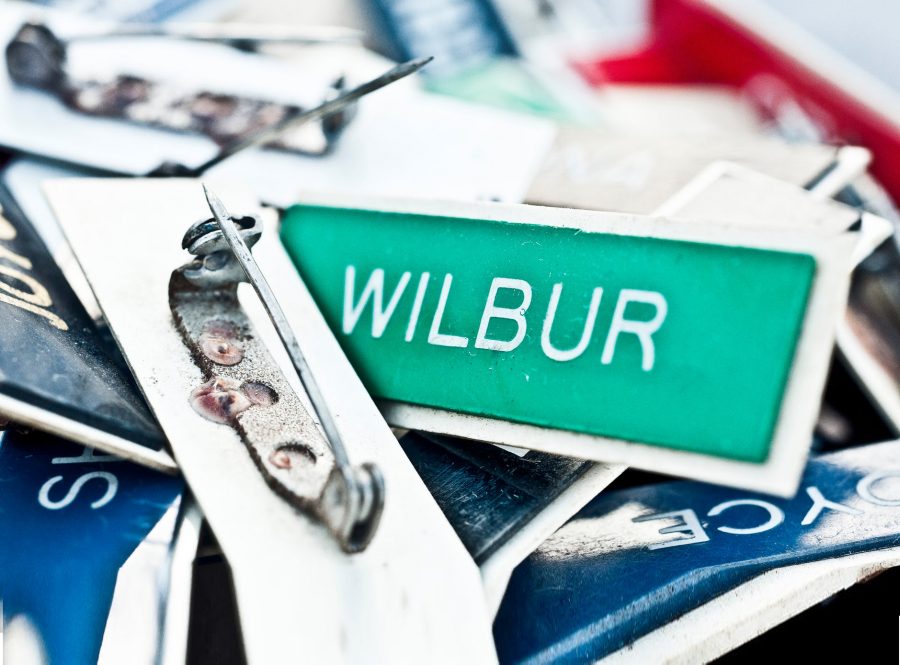 When I was preparing inline graphics—the little images embedded in a line of text—for my Take Control of Numbers book, I was almost finished when I remembered that the filenames needed to adhere to a naming convention: they must end with _inline. Nearly 50 files needed renaming. A brief mental facepalm moment was followed by the relieved realization that the Finder could do it for me with its batch-rename capability.

You didn’t know the Finder has a batch-rename capability? That’s because the option is disguised as a seemingly useless Rename command in the File menu. After all, you can rename a file by clicking and typing. So, the Rename command has no reason to exist—until you’ve selected multiple items. Then, it changes to Rename [X] Items (identifying the number of selected items). But how would you know that since you aren’t likely to peruse menus after you’ve selected a bunch of files or folders?

And that’s how you start: select multiple items in any window view (including, if you need to, a mix of files and folders) and choose File > Rename [X] Items. (For the rest of this article, I’ll refer to the command as simply Rename Items.)

When you choose Rename Items for a selection, a dialog appears. (If you’re working in a window, it slides out from the title bar; if you’ve selected items on the desktop, you get a free-floating version.)

We’ll take a look at each of these options in action.

How many files do you have whose names start with IMG_? Every time you dump images from your camera to your Mac, they’re named with that prefix, followed by a 4-digit number. Replace those leading characters with a descriptor so that you’ll know what’s what:

Have you ever wound up with a bunch of montly reports scattered among your monthly ones, or some similarly repeated typo? To replace montly with monthly:

You might be tempted to use the even briefer change of ly to hly; with that approach, however, if some of the files were correctly named to begin with, they would wind up with an extra h—monthhly. I recommend using full words to avoid problems that you might not notice while they’re still easily undo-able—although I confess this is a case of “Do as I say, not as I do.” If it’s too late to undo the mistake, it’s usually a cinch to do a second, more careful, batch rename to correct the issue. (Undo details are in the “Quick Tips” list at the end of this article.)

You can also use the Replace Text option to delete text from a filename: simply enter the delete target in Find, and leave Replace With blank. So, if you’ve decided that Monthly Report for January and its subsequent files are a tad redundant, set Find to monthly—making sure to include the trailing space—and leave Replace With empty.

There’s another example of deleting filename text ahead, under “Multiple-Pass Renaming.”

The Add text option in the Rename dialog lets you—you guessed it!—add text to the beginning or end of the filename: choose Add Text from the menu, type the additional text, and specify whether it goes before or after the name.

This is what I used to append _inline to my graphics, the issue I mentioned at the beginning of this article. You might find that you need to add a project name to a group of files, or that you forgot to append your initials to revisions of shared documents. Here’s how to make a simple adjustment like this:

As you can see in the screenshot above, an “after name” addition ignores the file extension (.png) because it’s not considered part of the file’s name.

I frequently use this method to add leading zeroes to the beginning of single-digit numbers so I can more easily scan the then-even text in a list of numbered filenames. With just the single-digit files selected, I set the Rename option to Add Text, type a zero in the text field, and choose Before Name from the second menu. 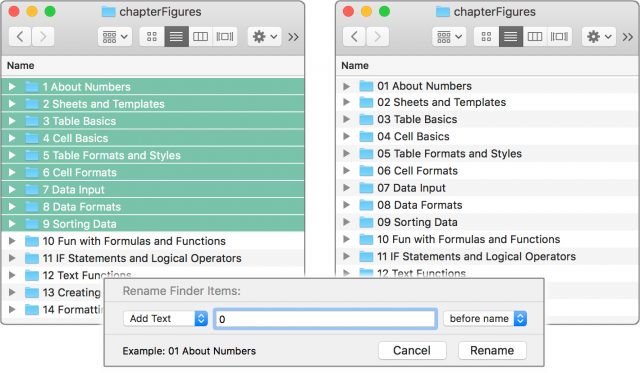 Format Filenames with Numbers or Dates

The Format menu choice in the Rename dialog is not a shining example of nomenclature, for either its title or its contents. Your formatting options are:

With each of these options, you can keep or replace the original filename, using the awkwardly named Custom Format field. Oddly, it usually starts with File as the default suggestion (without even the courtesy of a leading space, as you can see in the dialog’s Example line in this picture). 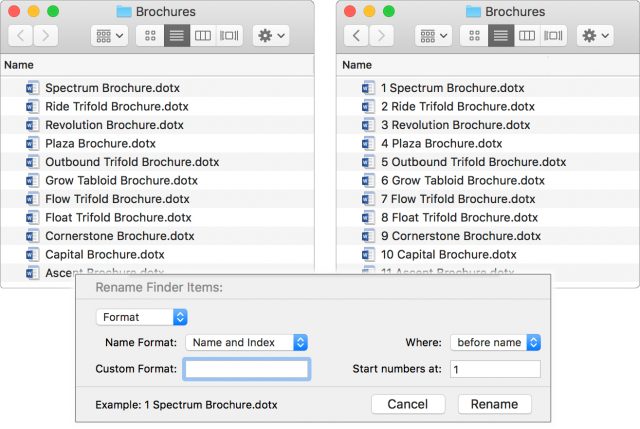 It’s not immediately apparent how either of the numbering options is applied to selected files. Here’s the trick: when you’re working in a List view that has the names in the first column, as is nearly always the case, the numbers are applied, in order, to those names. No surprise there, but the controlling factor is actually the window’s sort order—Dated Created, say, or Size—which, of course, affects the order of the names. So make sure to get your files in the right order before renaming them.

Sometimes renaming requires more than one pass: altering the name, then adding a date, and finally deleting the timestamp that accompanies the date, for instance. But edits are simple to set up and take only seconds to run, so multiple passes are not time-consuming procedures.

If your files are named Monthly Report for [Month], and you’d prefer them to be [Month] Report, run them through the rename mill twice, first stripping Monthly Report for, and then adding Report to the end of the filenames:

Strip the Time from Date & Time

I firmly believe that the application of a date stamp should be separate from a timestamp, but Apple failed to consult me on the matter. Luckily, it’s easy to strip out the time:

Here are a few more things you should know:

Comments About macOS Hidden Treasures: Batch-Rename Items in the Finder