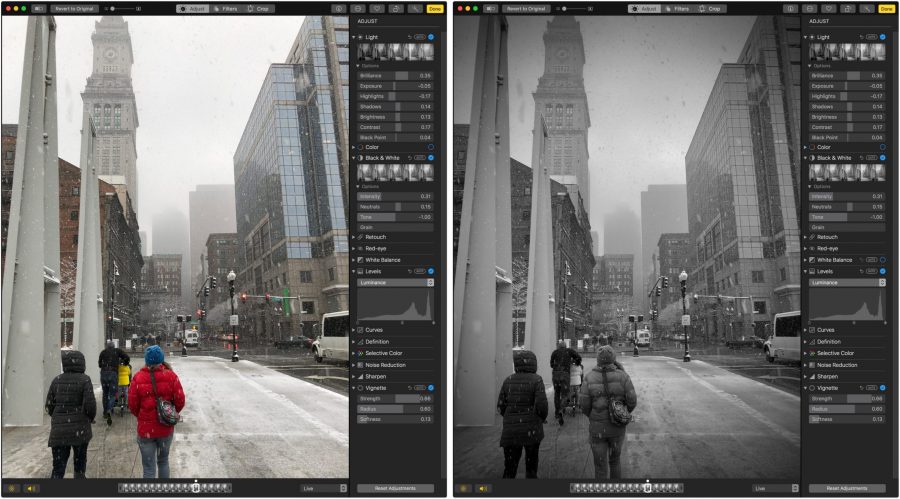 For many of us, one of the difficulties in editing photos is determining whether a minor change is better or worse. Does clicking the Enhance button in Photos improve the photo in a real way? Is applying one of the built-in filters helpful, or just a gimmick? When you bump up the saturation, are the colors too garish?

These questions are difficult to answer in isolation because it’s hard to remember precisely what the image looked like before you applied the adjustment. In iPhoto 2, way back when, Apple introduced a hidden feature that would simulate the Revert to Original command temporarily, undoing all your edit changes while you held down the Control key. In iPhoto ‘08, Apple changed that keyboard shortcut to Shift, for no apparent reason.

When Apple replaced iPhoto with Photos, that feature seemingly disappeared, and I have long missed it, to the point where I often instinctively press Shift when I’m editing a photo, to no effect. So I was quite embarrassed to discover only recently that the feature has been in Photos all along, but assigned to yet another keyboard shortcut: the M key, which, I’m informed by a reader, was the shortcut in Aperture. And, showing just how icon-blind I am, another reader pointed out that there’s a Show Original

button in the upper-left corner, next to the window controls. Happily, Apple brought the feature to the iOS version of Photos too, albeit with a different interface.

Regardless, the before/after comparison in Photos on the Mac works much the same way as it did in iPhoto. Double-click a photo in Photos and then click the Edit button in the upper-right corner (or press Return) to edit it. Make a change by clicking the Enhance button, tweaking sliders in the Adjust panels, or applying a filter. Then, while you’re still in edit mode, press the M key to see the original image. It sticks around only while the key is down; let go to see the edited image again. You can repeat the action as often as you want and even if you stop editing a photo and return to it later, but remember, it works only in edit mode.

The M key doesn’t let you compare the before and after results of any cropping you’ve done, unlike iPhoto. That’s too bad because sometimes all the editing a photo needs is some judicious cropping to remove extraneous detail on the edges and focus on the subject. However, there’s another even more hidden keyboard shortcut that toggles between the original image and the cropped image: Control-M. It’s odd enough that it’s a separate shortcut, but even stranger is the fact that it works only when you’re in either Adjust or Filter views, not in the Crop view. Control-clicking the Show Original button has no effect.

These shortcuts are for quick checks of what the original image looked like, so they aren’t helpful for seeing if one particular adjustment is better or worse while leaving all the others active. For that, click the blue checkmark next to each set of adjustment controls that you’ve used to turn just that adjustment off. Or, use Undo (Command-Z) and Redo (Command-Shift-Z), both of which offer multiple levels so you can step back and forth through your changes. Finally, Image > Revert to Original (or click its button) remains the ultimate undo, and yes, you can even use Undo on Revert to Original if you decide you don’t want to lose all your edits.

What about the iOS version of Photos? Start editing an image and then tap the image once, which causes it to show the original for about 2 seconds. During that time, Photos displays an ORIGINAL badge on the top of the image. If you’ve cropped the image as well, the badge reads CROPPED ORIGINAL and shows you just the cropped portion of the image, not the uncropped original as Control-M does on the Mac.