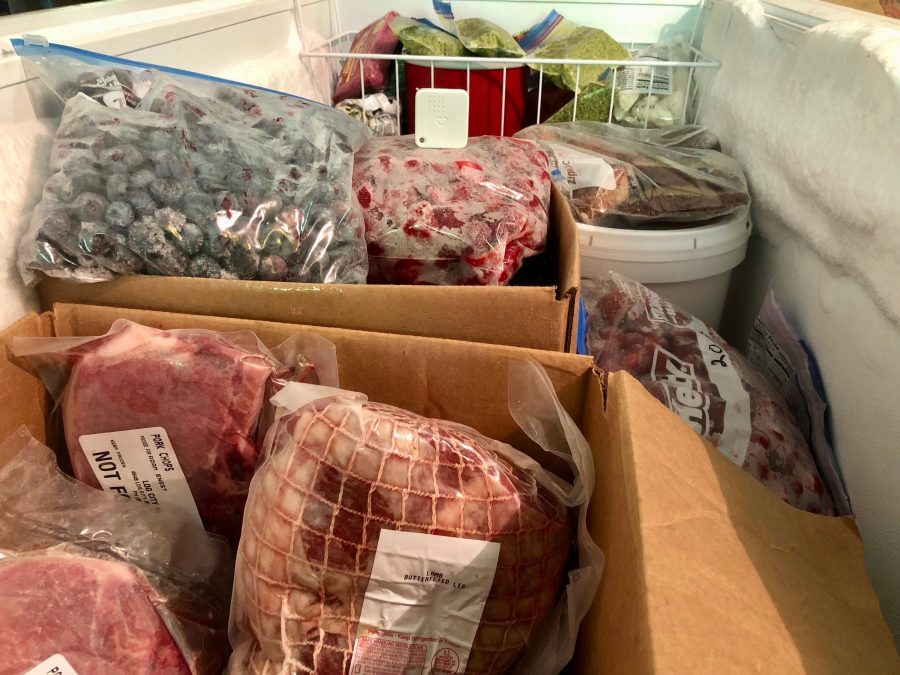 In my garage sits a 20-cubic-foot chest freezer, large enough to hold a side of beef or an entire pig—cut and wrapped, of course—along with frozen fruit, vegetables, and more. We bought the freezer when we moved from Seattle back to Ithaca in 2001, which means, somewhat shockingly, that it’s now 17 years old.

It needed a repair a few years ago, which we learned about after returning from a trip and discovering that some bags of veggies were soft. Luckily, it was as empty as it ever gets at that point, and the few larger cuts of meat were still sufficiently frozen, so we didn’t lose much.

But I have long worried about the freezer. We buy meat in bulk from a local farmer because the quality is excellent, we like supporting both the local economy and farmers who practice sustainable farming, and the price is incredibly cheap—think $5 to $6 per pound for every cut, including prime rib and massive ham roasts. (I’m a tech guy now, but I grew up on a family farm, raising cows and pigs and chickens and turkeys, so this is a familiar Old MacDonald world for me.)

The meat may be inexpensive by the pound, but it’s still a large up-front cost—$500 to $1000. Plus, a lot of work goes into picking and processing all those blueberries, strawberries, rhubarb, and peaches. So we have a lot to lose if the freezer were to fail. Freezers aren’t particularly expensive, and we could probably get it fixed or replaced in a day or two, but how would we know it had lost its cool? And would we discover it before the steaks got soggy?

I’m no longer all that concerned, not because of any particular confidence in the freezer’s reliability, but because I’m using the Wireless Sensor Tags system from Cao Gadgets to alert me with an iPhone app if its temperature rises too high. Similar sensors now live inside our refrigerator and its built-in freezer too. 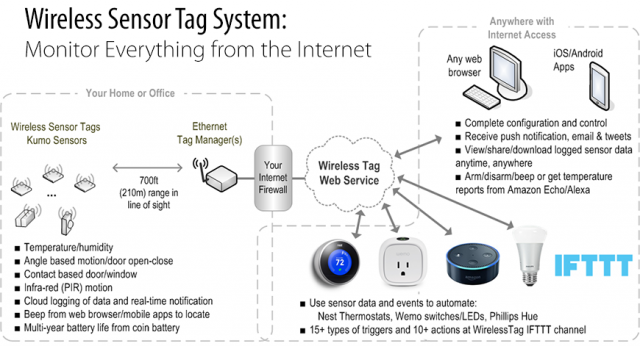 I came across this wonderfully practical solution back in 2016 while searching to see if Apple’s HomeKit technology could help me. It couldn’t then, and I haven’t heard of any such HomeKit-compatible temperature sensors since. But I decided that HomeKit compatibility wasn’t important since I don’t want to trigger automatic actions based on reports from these sensors or have them interact with other devices. All I want are notifications when the temperature gets too high.

That’s not to imply that automation isn’t available. The Wireless Sensor Tag system supports proprietary KumoApps, written in JavaScript. These cloud-based apps can control Wemo switches and LEDs, Philips Hue light bulbs, Honeywell Wi-Fi and Nest thermostats, and more. Plus, the Wireless Sensor Tag system works with the IFTTT automation service, providing connectivity to over a hundred types of Internet-connected products and services. I haven’t delved into any of these.

(When I asked Cao Gadgets about future HomeKit compatibility, they said that Apple’s Made For iPhone/iPad (MFi) program requirements were prohibitively expensive and that the software approach—the HomeKit Accessory Protocol Specification—is either only for non-commercial products or MFi licensees, which seems to be true.)

The sensor tags are about 1.5 inches (43 mm) square, and they’re made of white plastic, with a hole in one corner. If you pop one open, you can see that it holds just a tiny circuit board and a CR2032 battery. They communicate via radio frequency to a small base station—the Ethernet Tag Manager—that connects to your router and thus to the Internet. It doesn’t use Bluetooth or Wi-Fi, but rather a proprietary frequency with superior range, wall penetration, and power consumption. Battery life is advertised at 1 year, although I think I’ve gotten more like 9 months. 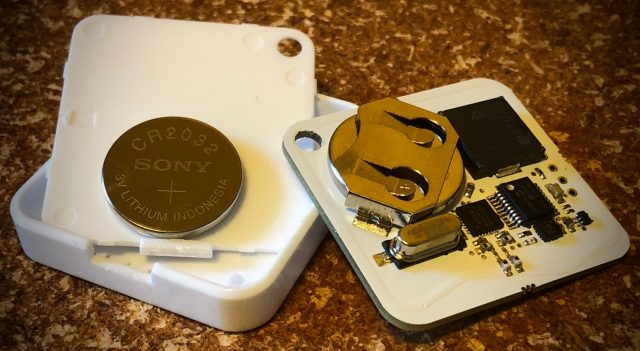 The Ethernet Tag Manager costs $39, and each of the three wireless sensor tags I bought was $26, for a total of about $120. These particular tags can sense temperature changes and motion—if I wanted, I could have them notify me whenever one of our appliances was opened, but since we don’t have a midnight snack bandit, that seems unnecessary. I can’t comment on the motion sensor capabilities, but I suspect they’re generally reliable given my experience with temperature monitoring and the associated app. They can also beep on command, so you could attach one to something small and then use the beep to find the item if it went missing.

Cao Gadgets makes other sensor tags, too, including one that detects moisture. I’m considering putting a couple of those near the dishwasher and in our utility room where all the plumbing for the house and our geothermal system comes in. Although our house is on a slab, so there’s no basement to worry about, it would still be bad if a pipe burst when we weren’t home. A friend’s parents once turned on their dishwasher before leaving for a two-week vacation—a water line failed before they boarded their flight, and two weeks worth of water flowed in, damaging floors, furniture, and even the foundation. To add insult to injury, they also got a huge water bill. Another friend has installed one of these moisture sensing tags next to his basement sump pump pit to alert him if the pump can’t keep up with a heavy rainfall or dies entirely.

Setting up the Wireless Sensor Tags system isn’t hard, but it can be a little fussy, since you must first make sure the Ethernet Tag Manager can communicate through your router. I had some problems until I configured port mapping/forwarding for port 6667 in AirPort Utility. Cao Gadgets has a lengthy support document with suggestions like this. 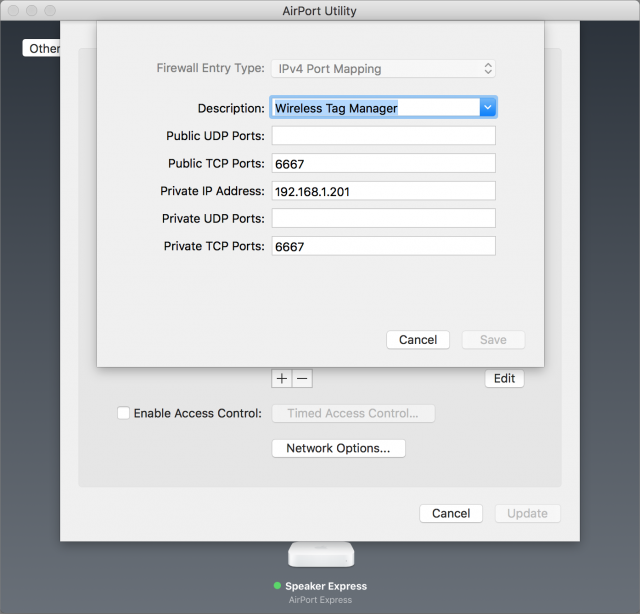 The rest of the setup and management takes place in the utilitarian WirelessTag iOS app, which provides a sometimes dizzying level of flexibility. Cao Gadgets provides a concise guide to setting everything up that’s worth following, although the basics are simple enough. (There is also a Web app, should you prefer to perform some of the setup and management from your Mac.)

In brief, you associate each new tag with your Ethernet Tag Manager, name the tag, and optionally give it a picture to help keep your tags separate in the app. Once you’ve done that, you’re ready to configure temperature monitoring. 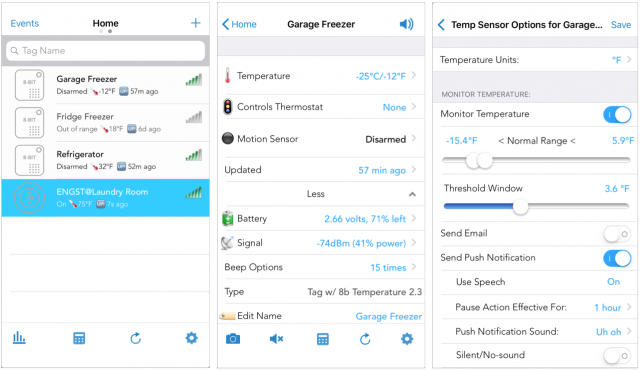 You also want to set how often the tag should update, along with notification options for low battery and out-of-range conditions. You can set these options for each tag individually, in the tag’s own screen, or for all the tags at once from the WirelessTag app’s Home screen. 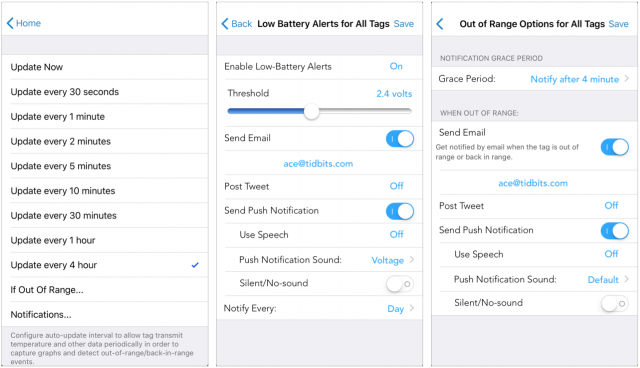 Once you’ve configured each tag, you can put it where you want. Make sure to position it in a spot where the temperature won’t fluctuate too much merely from the door opening. I don’t recommend attaching the tags permanently because you will need to pull them out to replace the batteries every so often. (If you want to use the tag’s motion-sensing features, you will need to affix it to a door or other object; velcro might be the best approach.)

You may be surprised at how much the temperature in your appliances varies, and the ranges may even change with the season. Our garage freezer cycles between -5ºF and -14ºF (-20ºC and -25ºC), and as the weather has gotten warmer, its temperatures have actually dropped, presumably because it’s working harder for longer. (Although the most commonly recommended temperature for freezers is 0ºF (-18ºC), foods maintain quality longer at somewhat lower temperatures.)

When you first start looking at the WirelessTag app’s temperature charts, which you can do individually by tag or all at once, you also may discover that you need to adjust your appliances’ settings for optimal temperature ranges. Since these settings are often controlled by simple dials marked from 1 to 10, it can take a few days of experimentation to get freezers to around 0ºF and refrigerators to between 34ºF and 40ºF (1ºC and 4ºC).

Luckily, the WirelessTag app lets you set upper and lower ranges—it’s generally easier to tap the numbers and type new ones than to use the sliders—and a threshold window outside which you’ll be notified. It takes some time to get your appliances set properly, and the ranges tweaked, so you’re notified only when appropriate. You don’t want to get a notification every time the fridge is opened and warms up slightly, for instance, since it will cool itself back down quickly. But you do want to know if the door didn’t quite close, leaving the lights on to heat the inside.

(I just bought some LED light bulbs to replace the stupidly hot incandescent bulbs in our fridge. It’s not the door being open a crack that’s the problem; it’s having two 60-watt light bulbs kicking out heat. I almost burned my fingers trying to get one out. The LED bulbs are much cooler and use a tenth of the power.)

After you’ve gotten both your appliances and the temperature ranges set correctly, the Wireless Tag System fades into the background, at least until something goes wrong. Since our fridge door doesn’t close all that reliably, I’ve gotten lots of notifications that tell me it needs to be given a shove. One even came through when we were away and had a housesitter who wasn’t familiar with the door—a quick text message solved the problem.

You may go weeks or months without hearing from the WirelessTag app, assuming everything is working correctly. That’s almost dangerous, since I’ve seen a few situations where something prevented a tag from communicating or where the app ended up in an odd state, such as after switching to a new iPhone. None of these situations were hard to recover from, but they did require checking in on the app. For that reason, I strongly recommend having low battery and out-of-range notifications sent to you via email as well as via the app.

One tag did fail, after about 16 months. I got a low-battery notification and then an out-of-range notification, but replacing the battery didn’t enable it to connect again. After running through all of Cao Gadgets’ troubleshooting suggestions, I contacted the company, and they nicely offered to repair or replace the tag if I sent it back, even though it was out of warranty. The replacement tag has worked fine since.

The Wireless Sensor Tag system may not be the sexiest form of home automation out there, but for my money, it’s among the most useful and practical. And while my usage has focused on temperature monitoring, it’s clear to me that it could do a lot more. So if you have any situation where you want to monitor temperature, moisture, motion, or light, check out the Wireless Sensor Tag system.