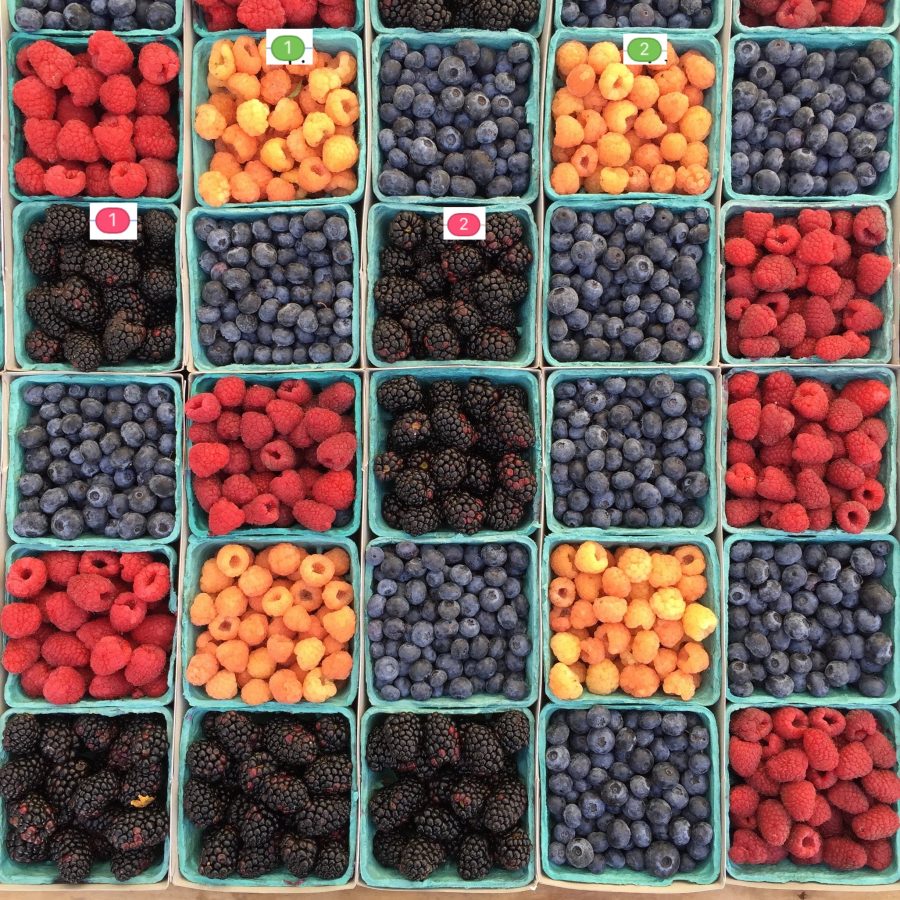 Photo by William Felker on Unsplash

Text boxes rank high on the list of useful Pages features. You can use them to slap a chunk of text anywhere you like in a document. Text boxes are ideal for sidebars, captions, callouts, authorial asides, or any other kind of text you need to put on a page outside the regular text flow of your document. They’re easily created by clicking the Text button on the toolbar or by choosing Insert > Text Box.

Until 2013, you could also link text boxes in Pages. That is, if you put more text in a text box than the box could display, you could link that box to another text box, and the extra text from the first box would flow into the second. That second text box could link to a third, and so on. This approach worked well for things like newsletters, where each story could be placed in its own set of linked boxes.

But in 2013, when Apple’s rewritten-from-the-ground-up Pages 5 came out, text box linking vanished, along with many other features Pages users had come to know and love (see “Why iWork Had to Change (and What That Has to Do with Aperture),” 9 July 2014). Over time, Apple brought most of those features back—a few here, a few there—in updates to Pages. It took until mid-2017 before Pages once again provided a way to link text boxes, and when the feature returned, it looked and worked differently from the old way. And that’s a good thing.

If you never used linked text boxes in the days before Pages 5, you can skip this section unless you are curious.

Text box linking worked something like this: every new text box you put on a page had two little widgets, one on the upper-left edge of the box and another on the lower-right edge. To make text flow from one box to another, you clicked the lower-right widget (call it the “output widget”) of the first box and then the upper-left widget (that is, the “input widget”) of the second box. Pages showed you the links between text boxes by drawing lines between the input and output widgets of the boxes so you could easily see where text was flowing.

That worked well until you had boxes spanning multiple pages, as you might in a newsletter where an article beginning in a box on page 1 might continue in a box on page 6. Following that long blue linking line across many pages was a drag. 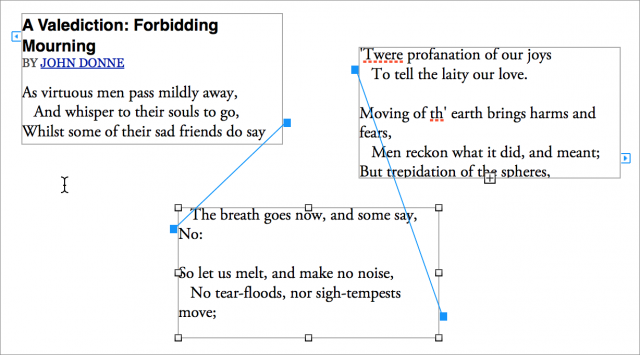 But the linking feature worked well enough, so when it vanished in Pages 5, there was much consternation in the Pages user community.

With today’s Pages, you can link two or more text boxes in a thread, and have multiple threads of linked text boxes in a document. In a newsletter, for instance, each thread would correspond with a different article, enabling you to start multiple articles on page 1 and then continue each one on different inside page.

Unlike Pages before version 5, these threads aren’t represented as blue lines stretching between boxes. Instead, each text box has a thread control widget at the top that you can click to control how the box links to other boxes. (Pages for Mac, iOS, and iCloud all support linked text boxes; in this article, I describe text box linking in Pages for Mac, but it’s similar in the other versions.)

Adding a box to a thread is simple: put another text box on the page and click its thread control. Pages assigns the new box to the most recently manipulated thread, flowing extra text into it as appropriate.

Think of the threaded text as a document embedded within your Pages document—that is, once you have selected some text or placed the insertion point within a text box, Edit > Select All selects all the text in the thread. Shift-clicking also works: you can select text within one box in a thread and then Shift-click text in another box in the same thread to select the range of text between the first click and the second.

Where a text box goes in a thread depends on the box’s location in the document. Generally, when you link a newly added box to a thread, and that box is on the same page as (or on any page following) the previous last box in the thread, Pages assigns the new box to the end of the thread.

But what if you put a new box on a page that appears before the start of a thread, and you link the new box to that thread? Smartly, the new box becomes the starting box for the thread, and Pages renumbers the boxes in the thread so that the text flows naturally between.

In other words, by default, the location of the boxes when you create them determines their order in the thread, rather than any hard-coded links.

This video explains how to work with threaded text boxes.

You needn’t, however, play games with box positioning to create the threading order you want. You can control where the box is located in a thread, remove it from a thread, or start a new thread with it by clicking its thread control: a pop-up menu offers various choices.

As much as I dislike how Apple likes to create user interfaces where controls appear only when you’re in the right spot, this one works well for me. As soon as I select a text box, the thread control appears; as soon as I hover over the control widget, it displays a pop-up menu > indicator; and when I click the widget, I have both control over and information about how the box is linked to other boxes.

With this menu you can:

In Pages, new text boxes by default are plain creatures: they are colorless, odorless, borderless, and the filler text they contain wears the document’s default Body text style. You can change all that:

Here’s a bonus feature: when you modify the look of a text box, such as changing its border and fill color, you can choose Format > Advanced > Set as Default Text Box Appearance. While this command won’t affect any existing text boxes in your document, any new text boxes you create in the document will have the new look.

Tying It All Up

It was a long four years between the disappearance of linked text boxes and their reappearance as threaded text boxes. Although it may have seemed as though Apple dragged its feet in bringing this capability back, text box threading in its current form is a slick, easy-to-use, and powerful replacement for the original linked text box feature. Users who felt that the introduction of Pages 5 in 2013 irreparably “dumbed down” the app might want to take a look at just how smart Pages 7 has become in 2018.

Portions of this article appeared in a slightly different form in version 2.2 of Take Control of Pages, Second Edition and are reused with permission.

Comments About How to Use Linked Text Boxes in Pages 7