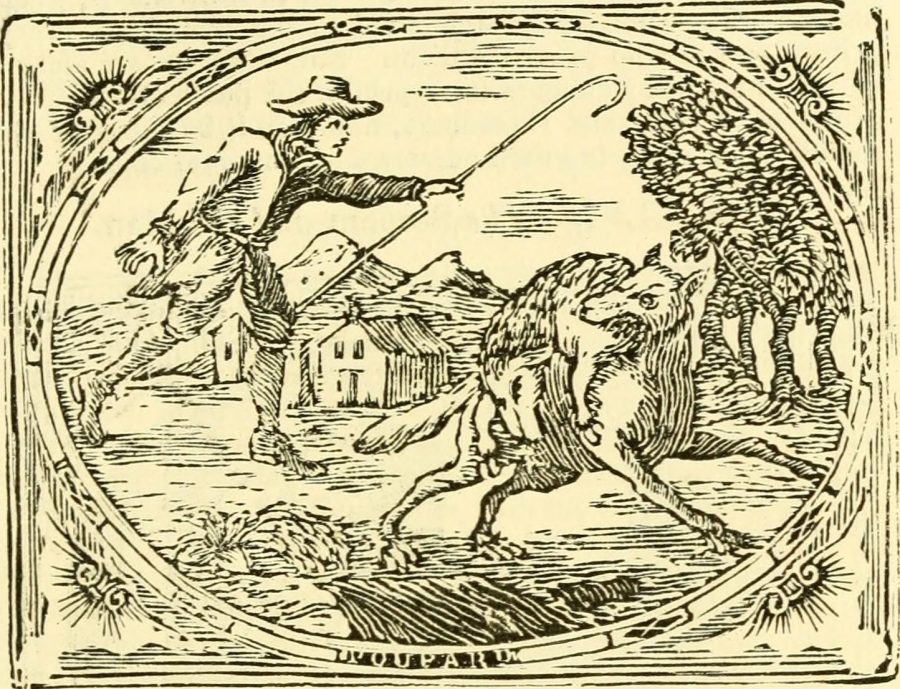 Photo by the Internet Archive.

Back in 2016, security researcher and developer Jonathan Zdziarski released a tool called Little Flocker that could protect Macs at the file level. Much as a firewall analyzes and blocks network traffic, Little Flocker locked down the file system and allowed only authorized applications access to only approved files.

Little Flocker was too complex to manage for average users, but it quickly became a darling among Mac security experts. Most modern malware doesn’t blindly hit your computer through a network scan. Instead, it tricks you—or your computer—into installing some piece of software that then does bad things. Little Flocker ensured that applications could access only data they were supposed to, making it far more difficult for malicious software to complete its nefarious mission. In fact, this compartmentalization is the foundation of iOS security and one of the primary reasons that iOS is the most secure consumer operating system available.

When Zdziarski took a job at Apple in 2017, he sold Little Flocker to the security vendor F-Secure, which released it as Xfence. Zdziarski’s job change started the clock ticking on when we might see similar capabilities built into macOS. With macOS 10.14 Mojave, Apple has added file-level protections, plus some additional security enhancements. And you know what? Mojave is running into the same usability issues that users of Little Flocker endured.

Apple has been inching down this path of protected files in macOS since it introduced Gatekeeper and sandboxing. With each release, Apple has tightened the sandboxing screws to limit the traditionally near-unfettered access of apps. However, application sandboxing as we’ve seen it so far applies only to apps downloaded from the Mac App Store and offers no protection to apps installed from any other source.

Mojave extends these protections in three key areas across all applications on your Mac:

Access to the camera and microphone is easily understood. If an app is going to use the camera or microphone, it needs to ask for permission, just as apps do in iOS. There’s little that’s controversial or potentially problematic about this privacy enhancement.

For most Mac users, the most obvious and significant changes are the enhanced notifications and protections for managing access to core privacy-related data stores: Location, Contacts, Calendars, Reminders, and Photos. In Mojave, when an application tries to access your location, contacts, calendars, reminders, or photos, you’ll need to approve that request to grant access. Again, this is similar to how things work in iOS and High Sierra—when an app wants to work with your photos or contacts, it has to ask permission first.

You might be thinking that there’s quite a bit more that deserves protection, and you’d be right. In fact, Mojave extends protection to data in Mail, Messages, Safari, Home, Time Machine, and certain administrative settings, but without the granular notifications of the data types we’ve been discussing. Apps can request access to data in Mail or Messages or Safari too, and they’ll appear in the Full Disk Access list in the Privacy pane of the Security & Privacy preference pane. 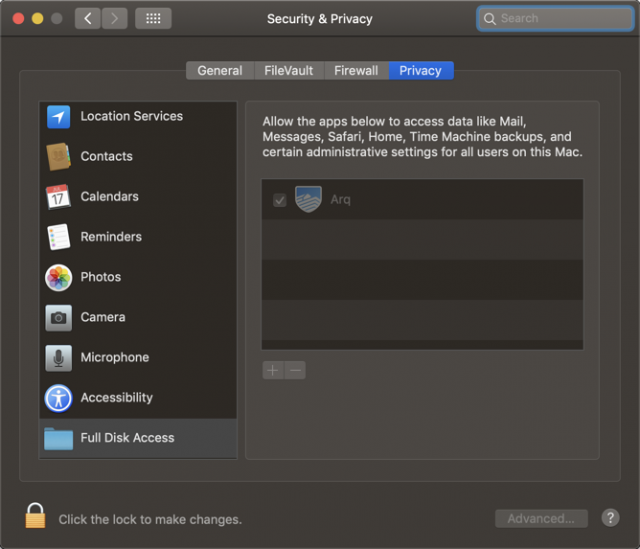 Keep in mind that non-Apple data repositories don’t receive this special protection, so if you use a third-party photo app (like Adobe Lightroom) or calendar software (such as Microsoft Outlook) with its own database and storage, these new protections won’t help you.

Here’s where things start to get tricky. If you provide access, all should be well, since the app is getting the data it expects, and it will appear in the appropriate list in the Privacy pane of the Security & Privacy preference pane.

But if you deny access to an older app, it may crash, since it has no way of anticipating such an error condition. Since Apple hasn’t yet officially released Mojave, we can’t say for sure what will happen, and it will undoubtedly vary by app. For a deeper dive on these changes over time, developer Howard Oakley has written some excellent posts about his struggles to update his tools for Mojave.

Mojave also introduces new authorizations for the Apple events that applications use to communicate with each other. Apple events are the essential backbone to Mac automation capabilities you might not even realize you are using, because Apple events enable one application to launch and sometimes control another app.

In a blog post talking about how scheduling and scripting works in Super Duper, Dave Nanian of Shirt Pocket notes that simply choosing Show in Finder in Xcode will trigger a new authorization request. (That was true in Mojave beta 8; in beta 10, Show in Finder works without an authorization request but choosing File > Open in External Editor in Xcode still asks to control the Finder.) The ability to interconnect and allow applications on the Mac to communicate and send commands to each other is deeply embedded into far more applications than the average user might realize.

These inter-application requests also trigger notifications to authorize access, again using a mix of developer-specified and default text. Combined with the personal data protections, this could lead to a flood of alerts and user confusion. Nanian compares it to the well-intentioned but eventually removed alerts that Microsoft used in Windows Vista. 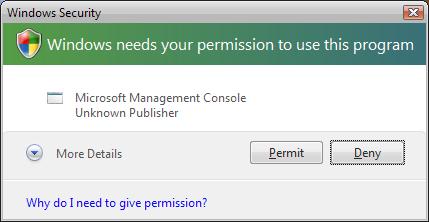 And of course, lots of people write their own apps using AppleScript. Over at Six Colors, Jason Snell talks about how he wrote an AppleScript-based app that demands authorization repeatedly even after he added it to the Accessibility list in the Privacy pane of the Security & Privacy preference pane.

Developer Felix Schwarz discusses these complexities with a deconstruction of the notifications and the complexity required to manage them. Apple has addressed some of his concerns, but will likely struggle for some time to strike the right balance between security and usability.

While the most visible changes in Mojave center around user notifications, the Mac’s new operating system also includes a range of additional under-the-hood hardening. Some of these are obvious evolutions, such as enhancements to the System Integrity Protection (SIP) features that defend the core operating system from malware.

In an unexpected set of changes, Apple is extending some of the runtime protections it uses for its own applications to developers. Opting into these improves an application’s ability to protect itself from being compromised by malware, with features like improved code signing, a tighter “chain of trust” to allow only expected code libraries, and restrictions on running debuggers against an app. All of these inhibit common ways attackers compromise applications to gain control of a system.

Apple has even created a notary service for developers to submit applications for additional review. Unlike app review, this notary service is available to all applications, even those distributed outside the Mac App Store. Notarized apps are checked for their security settings and embedded malware before Apple will sign them. This is merely the first step, as Apple intends to require notarization for all apps signed with developer IDs in the future. If you recall, a developer ID is required to install an app on Macs with the default Gatekeeper settings.

Regardless of how Apple finesses these dialogs in Mojave and its updates, all Mac users will need to get used to authorizing app requests for privacy-protected data as they now do on iOS. Balancing security notifications and authorization requests is notoriously tricky. Prompt users too often and they will both become annoyed and reflexively click OK. A security feature has failed when the noise of so many alerts leads users to stop reading them—and that eventually leads to malware asking for and receiving authorization. It’s a modern-day version of the “The Boy Who Cried Wolf.”

These prompts are nothing new to anyone who uses a recent version of iOS, but the concern is that the Mac is a more complex environment with more inter-app communications and cross-app file access than most users tend to use on their iPhones.

As a security professional, I don’t think Apple has much of a choice in adopting file level protections. The threats are just too great, and the liability just keeps growing. Apple has, for the most part, focused on the right data to protect, but it still needs to improve the user experience surrounding notifications, especially for users with a mix of old and new applications that use different wording for their authorization requests. Practically speaking, most users don’t install that many applications that access these personal data stores. And even then, authorization requests for contacts or photos are relatively easy to explain, and for users to understand, particularly if they’ve seen similar requests in iOS.

Some types of applications, such as backup apps, face greater challenges. For example, I use Arq for system backups (see “Roll Your Own Cloud Backups with Arq and B2,” 18 May 2018). After installing the Mojave beta, I experienced a string of repetitive alerts for access to every one of my protected data categories, followed by failed backups even after I clicked OK a few dozen times. The eventual answer was to go into the Security & Privacy preference pane and add Arq to the Full Disk Access list manually. Average users would likely have trouble figuring this out on their own, and they may be confused and unhappy about having to do it even if the developer provides instructions.

Authorization requests for Apple event–based inter-application communication are even more likely to be problematic from a usability standpoint. Developers will have to update their apps with useful notification descriptions, plus include extensive error handling in case users make a decision that impedes an app’s functionality.

Apple needs to improve Mojave to provide both developers and users with clear alerts that avoid the pitfalls that crippled so many similar attempts in the past. There’s a reason any mention of Windows Vista still sends shudders down the spine of anyone who worked a help desk during those perilous times. And the company needs to improve the current situation for anyone who creates AppleScript-based apps to make sure such apps don’t prompt constantly for access.

Don’t get me wrong. Apple is moving in the right direction. These features have measurable security benefits and the potential to make attacks against Mac users dramatically harder, which will result in increased safety for all. Mojave’s security and privacy enhancements are a natural progression from Gatekeeper, sandboxing, restrictions on kernel extensions, and the under-the-hood hardening of recent years. Combine these software changes with Apple’s recent inclusion of special security hardware in the MacBook Pro and iMac Pro, and you can see how the company is driving Mac security closer to where iPhones and iPads are today, all while striving to maintain the flexibility that makes the Mac essential.

But to achieve that goal, Apple must put more work into striking the right balance between security, privacy, and usability.