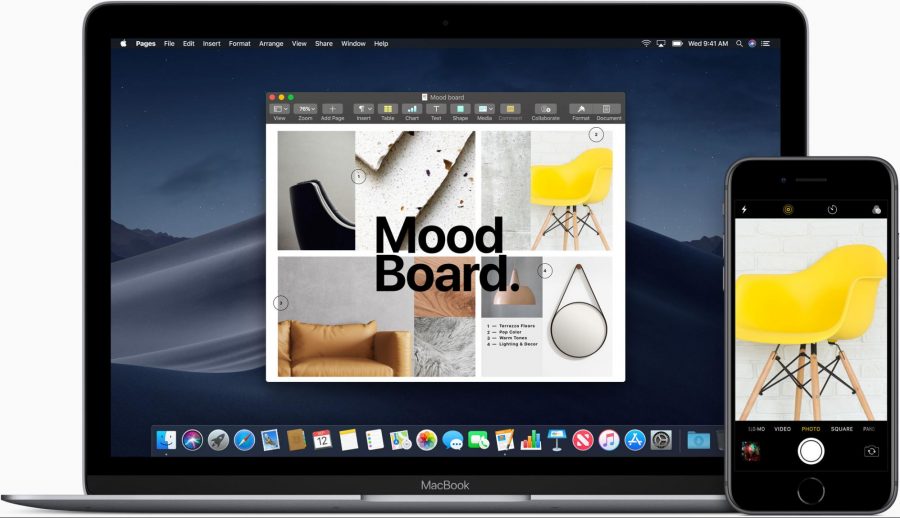 One of the cool things about living in the Apple ecosystem is how your various Apple devices can interact with each other through Continuity, which includes features like auto-unlocking your Mac by wearing your Apple Watch, automatically moving copied text across devices, sharing files via AirDrop, and taking calls anywhere with Wi-Fi Calling.

In macOS 10.14 Mojave, Apple has expanded these capabilities with Continuity Camera, a new feature that lets you take pictures or scan documents with an iOS 12 device and have them immediately show up on your Mac—either on the Desktop or in a document. If you’ve ever been working on your Mac and needed to email someone a scan of a receipt that’s sitting on your desk, you’re going to love Continuity Camera.

As with many system-level features, Continuity Camera requires explicit support in apps. Unsurprisingly, many of Apple’s apps offer Continuity Camera in Mojave, including the Finder, Mail, Messages, Notes, TextEdit, Pages, Keynote, and Numbers. I haven’t yet heard of any third-party apps that have added support, but let us know in the comments if you run across any.

Continuity Camera has a few basic requirements: the Mac and iOS device need to be on the same Wi-Fi network, have Bluetooth turned on, and they must be logged in to the same Apple ID, which must be set up with two-factor authentication. Check the Apple ID on your Mac in System Preferences > iCloud and in iOS under Settings > Your Name.

How you access Continuity Camera varies somewhat by app, but the most common way is to Control- or right-click where you want the photo or scanned document to appear. If you have only one device, you will see a subhead for the device, like iPhone X, above commands for Take Photo and Scan Documents. If you have multiple devices, you’ll see an “Import from iPhone or iPad” submenu, under which those commands will be replicated for each device. 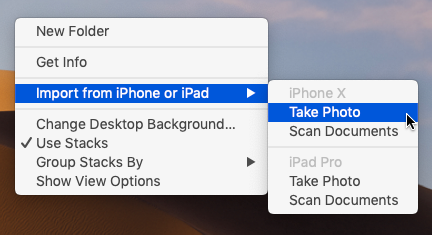 In many of Apple’s apps, you’ll also see Import from iPhone as a submenu in the File menu, although that submenu moves to the Insert menu in Pages, Keynote, and Numbers. Plus, in Mail composition windows, there’s a drop-down menu on the right side of the toolbar that includes the Take Photo and Scan Documents commands.

For simplicity’s sake, I’m going to focus on importing images to the Desktop, but the process is the same regardless of whether you’re in the Finder or some other app. If you’d like to watch a quick visual guide to Continuity Camera, check out my short video that explains how to use it.

Here’s how to take a photo with Continuity Camera:

For most people, document scanning with Continuity Camera is more useful than taking photos, since you’re unlikely to need a one-off photo that you can take while sitting near a Mac. Be sure to have your document ready on a well-lit surface, and then follow these steps:

It’s tempting to import directly into apps, and for a quick photo or single-page scan, that should work well. However, you might prefer to import photos and scans to the Desktop first, and then drag them to their eventual destination. That approach gives you another copy of the file, which may provide more flexibility or security—you never know when you’ll need a photo or scan again.

As with many Continuity features, Continuity Camera can be fussy. Its contextual menu commands sometimes disappear, presumably due to communication lapses. Once when I was scanning, tapping the Save button did nothing—this might have been an indication of a communication failure. And another time, it just threw up its hands.

Nonetheless, we’ve found Continuity Camera to be among the most useful features of Mojave. Although we’re still recommending that most people hold off on upgrading to Mojave, once you take the leap, be sure to give Continuity Camera a try!