Have you ever wanted to create your own commands for Siri to extend its capabilities? In iOS 12, that’s now possible, thanks to the addition of “shortcuts,” which Apple describes as providing “a quick way to get things done with your apps.” You can assign spoken phrases to these shortcuts, enabling you to invoke them with Siri.

Unfortunately, Apple has caused some level of confusion with its terminology surrounding shortcuts. The terms include:

For this article, I’m going on focus on Siri Shortcuts, which offer the most bang for your time invested. You have little or no control over Siri Suggestions, and creating shortcuts with the Shortcuts app is much more involved (check out the Police shortcut, which sends your location to a contact and starts recording video).

Although Siri Shortcuts lets you create new commands for capabilities that are in iOS or built into Apple’s apps, you’ll most appreciate its power once you see it work with third-party apps. Unfortunately, it’s not easy to figure out which apps support Siri Shortcuts. Try the following to figure out if an app supports Siri Shortcuts:

Unsurprisingly, given developer Marco Arment’s predilections, his podcast player Overcast offers deep support for Siri Shortcuts (I still think Overcast is the best podcast player for iOS despite some fierce competition—see “Overcast Refines the iPhone Podcast Experience,” 16 July 2014). In Overcast, tap the button in the upper-left corner to open the Settings screen, and then tap Siri Shortcuts to see a full list of supported actions. With them, you can use Siri to play, pause, seek back or forward, set a sleep timer, get URLs, access specific podcasts, and much more. 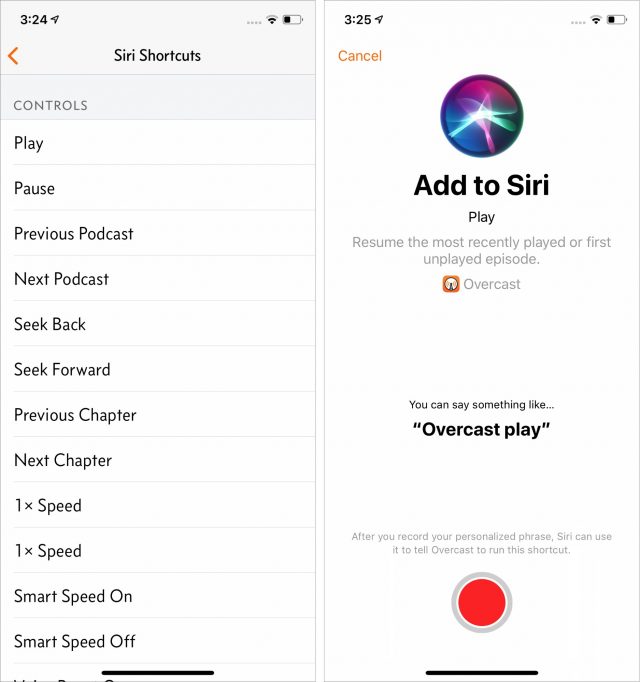 Another app that supports Siri Shortcuts is CARROT Weather, which is still my favorite weather app (see “CARROT Weather Predicts Cloudy with a Chance of Snark,” 22 January 2018). Again, go into Settings and tap Siri Shortcuts to make shortcuts for actions like getting the current weather, an extended forecast, or a weather map. You can also choose Interact, which lets you talk with CARROT directly through Siri. 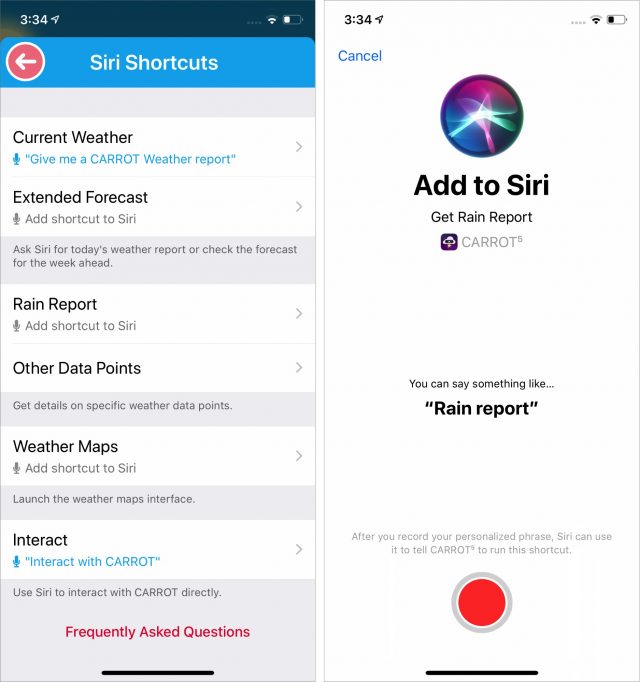 To create Siri Shortcuts for apps that don’t expose their shortcuts or for Apple’s apps, go to Settings > Siri & Search > All Shortcuts. There you’ll see suggested shortcuts for apps like Health, Mail, Maps, and Messages, as well as some third-party apps. Tap See All next to an app name to see more shortcuts for that app, separated into Suggested Shortcuts and Recent Shortcuts.

Unfortunately, there’s no way to predict what you’ll find here either. Some apps, like Fantastical, Overcast, and Twitter, show general command-and-control shortcuts you can create in Suggested Shortcuts—such as “Check weather” in CARROT Weather or Play in Overcast, whereas others, like Google Maps, Messages, and Phone, only offer content-specific shortcuts—like directions to a specific place or sending a message to a contact. You may be able to get a shortcut to appear here by performing the task you want in the app several times and then coming back to this screen. 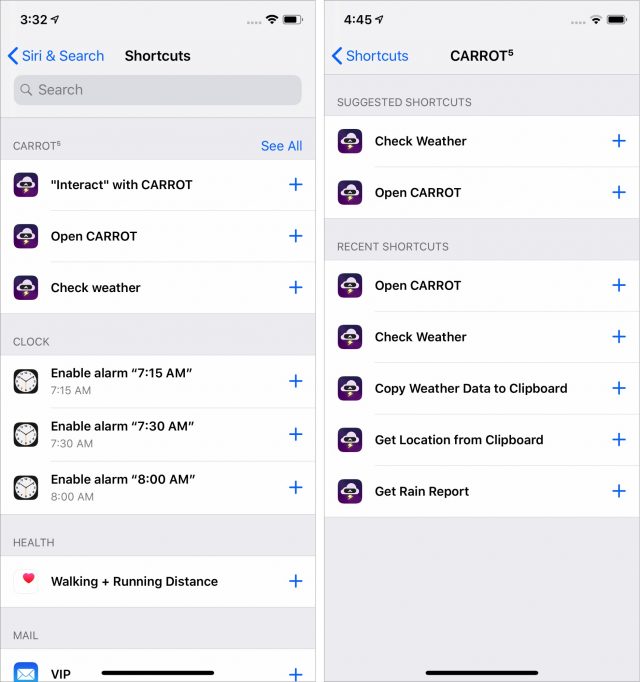 No matter how you discover a particular shortcut, the process of adding your own voice command is the same:

Now you can use your new phrase just like any other Siri command. Two of my favorites are “Play the Menu Bar on Overcast,” which plays the latest episode of the Menu Bar podcast in Overcast, and “Give me a CARROT Weather report,” which gives me a weather report from CARROT right in the Siri interface. I’m also digging the aforementioned “Is it going to rain,” because it gives me a quick and accurate rain forecast. 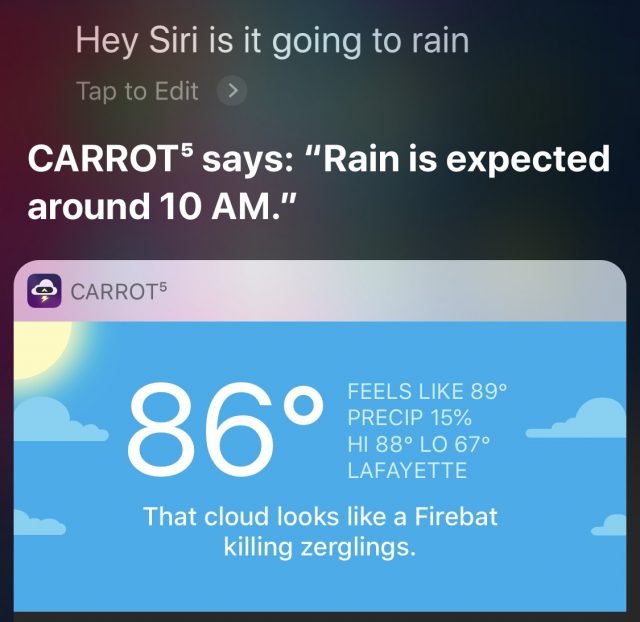 To see all the Siri Shortcuts you’ve set up, go to Settings > Siri & Search > My Shortcuts. (This list also includes any shortcuts you’ve created in the Shortcuts app and assigned a spoken phrase.) Tap a shortcut to re-record its command phrase or delete the shortcut. You can also swipe from right to left on a shortcut to delete it.

I’ve published a video demonstrating how to create and use Siri Shortcuts.

We’re just starting to see the potential of Siri Shortcuts. Beyond what I’ve already shown with Overcast and CARROT Weather, Philips Hue has added Siri Shortcuts support to its app. This support initially seemed redundant because HomeKit already lets you control Hue lights with Siri, but it turns out that the Hue app supports actions that HomeKit does not, like scenes that change throughout the day. Also, the Apple Store app lets iPhone Upgrade Program members create a Siri Shortcut to complete iPhone XR preorders—the option appears during the preapproval process. We’ll all have to keep checking back with our favorite apps to see what they provide—Adam Engst is hoping for Siri Shortcuts support in the Libby ebook reader, so he can tell Siri to play his current audiobook for 15 minutes while going to sleep.

As potentially useful as these built-in Siri Shortcuts are, the Shortcuts app is where the real power is. We’ll be covering it here in TidBITS later on, but if you’re impatient, you can read the chapter that I dedicated to it in Take Control of iOS 12.

Comments About Inside iOS 12: How to Create Siri Shortcuts