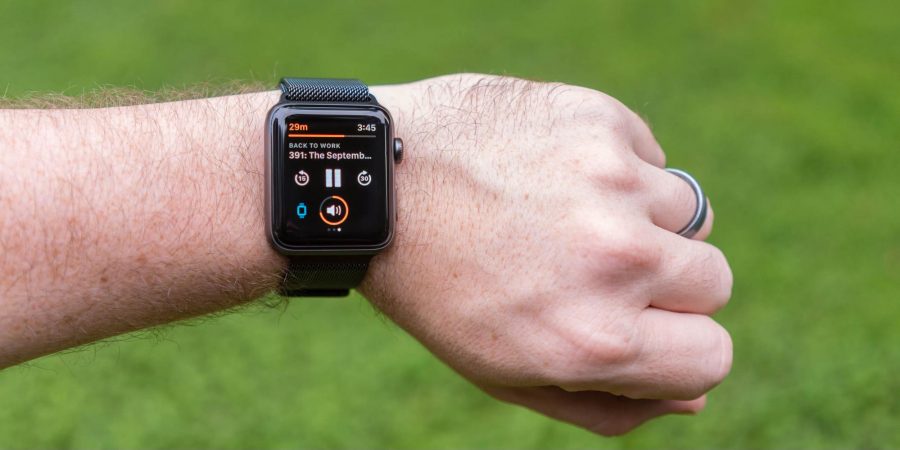 Using the Apple Watch as a standalone, iPod-style podcast player makes sense: Load episode files into its internal storage, leave the iPhone behind, and hit play on the Apple Watch to start listening through AirPods or other Bluetooth earbuds. This approach appeals to athletes and those who prefer not to carry an iPhone at all times.

Until recently, though, copying podcast files to the Apple Watch could only be accomplished using obscure third-party apps with rough edges and reliability problems (see “Five Apps That Play Podcasts Directly from Your Apple Watch,” 9 April 2018).

Now, thanks to capabilities exposed in watchOS 5, better podcast apps have arrived. Apple has released an Apple Watch version of its Podcasts iOS app, which enables transferring podcasts from phone to watch and turns the Apple Watch into a decent standalone podcast player. Podcasts works with Apple Watch versions all the way back to the Series 1 but excludes the original Apple Watch, which cannot run watchOS 5.

The popular (and free) Overcast podcast app for iOS now also has a sibling app on the Apple Watch. Developer Marco Arment is revisiting the Apple Watch after an initial foray he deemed so unsatisfactory that he aborted it back in August 2017. With watchOS 5, he thinks he can more reliably transfer podcast files to the Apple Watch and properly execute playback there.

Each app also functions as a remote control for its companion iPhone app so you can control playback of iPhone-stored episodes without pulling out your iPhone.

Apple’s Podcasts takes watch-based podcast playback one step further, enabling cloud-based podcast streaming on Apple Watch Series 3 and Series 4 models. This feature requires an Internet connection via Wi-Fi or cellular while eliminating the need for the companion iPhone to be involved. You can even summon such content by name using Siri commands.

If you use Apple’s Podcasts on your iPhone, your subscriptions automatically appear in the Apple Watch version of the app. This includes downloaded episodes, which sync to the watch.

If you want to fine-tune this syncing behavior, go into the Watch app on your iPhone, select Podcasts, and switch from Listen Now to Custom. A toggle for each subscribed podcast appears; flip the ones you want, ignore the rest. Syncing will then proceed selectively, based on the new settings. 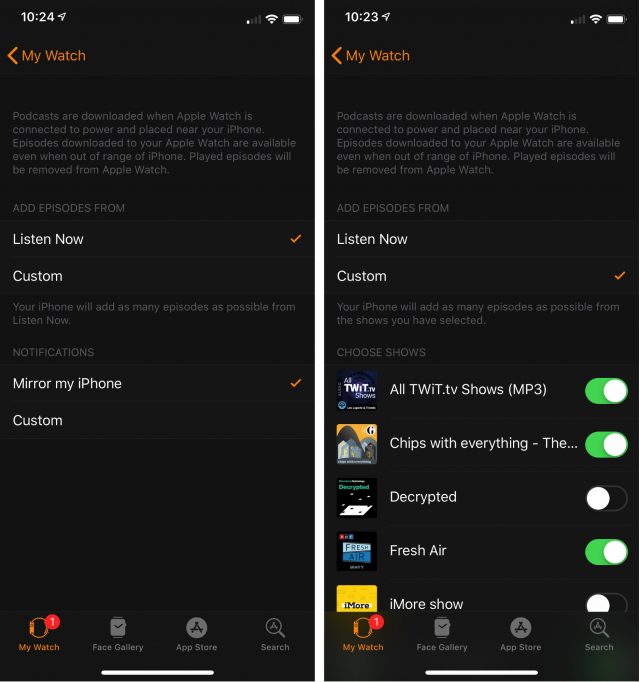 Apple Watch apps have to be simple by necessity, given limited on-screen real estate, and the Podcasts app is no exception. You are greeted with just two buttons: On iPhone and Library. (A third button, Now Playing, appears when playback of a podcast is in progress.) Below these buttons is an additional interface flourish—a carousel of podcast logos that flips with vertical finger swipes.

Let’s look at these interface elements, starting with On iPhone. This is where you turn your Apple Watch into a remote control for your iPhone. Tap play on your watch and the episode audio will emanate from your phone.

You can browse for On iPhone content in four ways.

When you play an episode, the aforementioned third button—Now Playing—appears on the main menu, and at the top of the On iPhone menu. Tap either for a play window with a play/pause button, a round volume indicator you can adjust with the Digital Crown, a button to speed up or slow down playback, and buttons to skip forward and backward.

Next up is Library, which holds episodes synced to the watch, as well as those that you can stream directly from the Internet. As with the On iPhone options, episodes are listed by show and also in a reverse-chronological episode list. When you play an episode, a Now Playing button appears on the main menu—but, oddly, not in the Library menu.

On my Apple Watch Series 4 without cellular access, I found it difficult to distinguish between downloaded episodes and those that were only available for streaming. I repeatedly got a warning that I needed Wi-Fi or cellular to access a particular episode, meaning it was not stored locally. The episode played fine when I was back on Wi-Fi, but this raised the question of how and where to find my synced episodes.

Finally, we come to the carousel of podcast logos. It’s a lovely touch since it provides a highly visual way to flip through your subscribed podcasts. When you tap one of the album covers, the newest episode of the corresponding podcast begins playing.

Unfortunately, I was at times again unable to play episodes when away from Wi-Fi. So, again, where are my synced audio files? Certain podcast logos showed little cloud icons, which supposedly indicates they are available only for streaming, but episodes without those icons wouldn’t play away from Wi-Fi either.

Siri integration is a welcome bonus because it gives you access to the entirety of the iTunes podcast catalog from your Apple Watch—assuming you already know what you want, since there is no way to peruse the catalog visually. You can use Siri to subscribe to podcasts and to play episodes of podcasts to which you’re subscribed.

I was intrigued about Overcast for watchOS since I’ve used the iPhone version intermittently over the years, and it’s one of the most popular podcast apps.

After you’ve installed Overcast for iOS and set up your subscriptions, you’re ready to install the watchOS version via your iPhone’s Watch app and fine-tune a few settings. As with Apple’s Podcasts, Overcast is designed to auto-sync episode files from phone to watch—and you can decide how many episodes (10, 20, or 50) will sync. Additionally, you can use toggles to select which shows and playlists will sync, and which won’t. 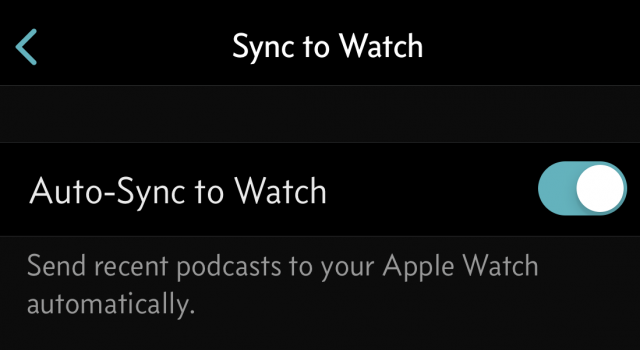 I particularly appreciated Overcast’s initial screen, which makes it crystal-clear where an episode file resides. At the top, it has icons of a phone and a watch. Tap the phone icon, and you are in On Your iPhone remote-control mode. Tap the watch icon, and you are in On Your Watch, working with files copied to the watch. This toggle eliminates the ambiguity that can make Podcasts confounding.

Navigation with Overcast is more flexible and intuitive than in Podcasts. In addition to tapping (to navigate into a playlist or show, or to play an episode), Overcast supports leftward and rightward swiping between its three screens. From the main screen, swipe left once to move to the currently selected episode and a second time to get to the play screen. Podcasts allows only rightward swipes, as the equivalent of a back button.

Overcast’s play screen shows a play button, a progress bar, a round volume indicator that you control with the Digital Crown, and buttons to skip forward or backward by particular amounts of time. If you’re playing an episode that resides on the Apple Watch, a watch icon appears at the lower left.

Overcast, though thoughtfully designed, didn’t always work well for me. I ran into performance hiccups, such as play buttons that would not work or responded sluggishly, unwanted episodes appearing unexpectedly on the screen, and so on.

Phone-to-watch syncing was sometimes flaky, as well. Podcasts are supposed to sync in the background, typically overnight when the watch is charging, but I frequently couldn’t get every show designated for syncing to do so, even after leaving the Apple Watch and iPhone idle for hours. There’s a workaround: episodes in the iPhone app have a manual send-to-watch option that works nicely, though not always as quickly as I would like.

Finally, I sometimes found it hard to keep Overcast in On Your Watch mode. I’d be playing a locally synced podcast and then pause to do something else. When I returned to the app, the play screen still displayed the episode, but it was the version from my iPhone, and I had to navigate back to the watch version. This isn’t a big deal, but it’s a little annoying.

The Apple Watch versions of Podcasts and Overcast, though a boon for podcast addicts, have other shortcomings.

Neither displays episode descriptions, which can make it difficult to figure out what an episode is about. Neither lets you scrub audio with a fingertip, so you have to mash the forward and backward buttons repeatedly. Neither lets you browse podcast catalogs, though that wouldn’t be ideal on such a diminutive screen.

Despite their limitations, these podcast apps point to something powerful: a smartwatch that is increasingly independent of its companion smartphone. Another recent indication of this evolution is the Audible app, released by the Amazon-owned audiobook publisher, which now allows transfer of audio files to the watch for standalone playback much like Podcasts and Overcast do.

What about other leading iOS podcast apps with Apple Watch apps? Pocket Casts (my current favorite) and Castro come to mind. While neither has announced support for standalone Apple Watch playback, I have to imagine that’s on the roadmap.

Pocket Casts does have sophisticated phone-remote capabilities that are keeping me loyal, at least part of the time. Its Apple Watch app shows me newly released episodes of all my subscribed podcasts, and I can tap any listing to begin playback on my iPhone. Unplayed, partially played, and starred episodes are displayed on separate watch screens. Even filtering capabilities can be accessed on the Apple Watch as well as on the iPhone.

Castro is less appealing at the moment, permitting watch playback of an iPhone-hosted episode only if it has been added to the iPhone app’s queue, and providing no watch functionality beyond that.

For standalone Apple Watch playback, meanwhile, Podcasts and Overcast are both fantastic choices. Podcasts could use a bit of interface refinement to distinguish between local and remote episodes, and Overcast would benefit from some bug fixes and performance improvements.

But, with impeccable pedigrees and interfaces that already go a long way to making the Apple Watch a kick-ass podcast player, these two apps are definitely worth a look.