As always, we encourage waiting a few days to install these updates, in case any issues crop up.

Don’t expect any fireworks or new features from the iOS 12.1.3 update, just a collection of minor bug fixes. 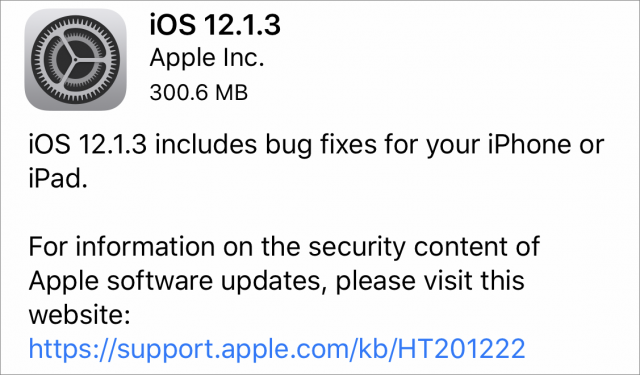 It also fixes a couple of HomePod bugs that:

By default, the HomePod will install iOS 12.1.3 automatically, but you can disable automatic updates and install manually if you prefer. In the Home app on the iPhone, tap the house button in the upper-left corner, and under Speakers, tap Software Update. 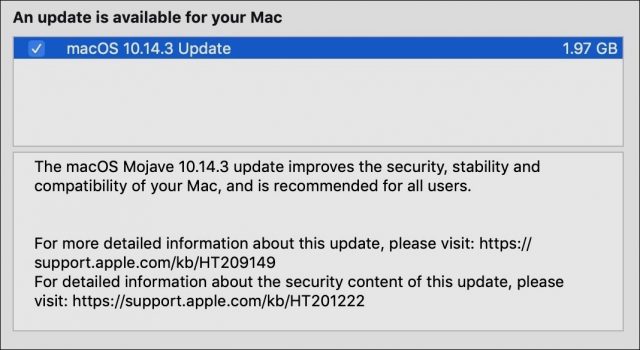 Apple does provide a little more information on its support site. Here are the entire release notes, verbatim:

This update improves the security, stability, and compatibility of your Mac and includes the following enterprise content: When making a file-sharing connection that uses a valid Kerberos TGT to authenticate, users are no longer prompted to enter credentials.

Despite the lack of notable new features, the update is still 1.97 GB, and you can install it from the Software Update pane of System Preferences. Alternatively, Apple offers combo (2.49 GB) and delta (1.99 GB) stand-alone updaters, but as reader Al Varnell pointed out in the comments, the combo update has an error that prevents it from installing. Stick to Software Update or the delta updater.

watchOS 5.1.3 takes the award for the shortest release notes of this batch of updates with a grand total of seven words: “This update includes improvements and bug fixes.” The update also includes 13 security fixes.

The slackers in charge of the release notes for tvOS 12.1.2 clearly just phoned in their work, sticking with the traditional eight words: “This update includes general performance and stability improvements.” The update also offers 17 security fixes. If automatic updates aren’t on, you can update your fourth-generation Apple TV or Apple TV 4K by going to Settings > System > Software Updates.