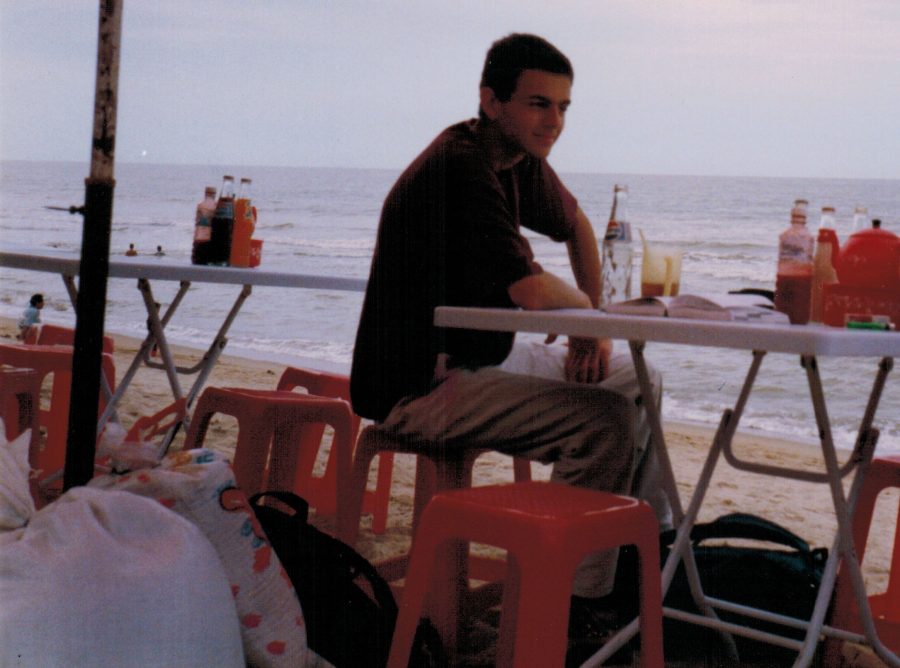 We have another trip down memory lane for you, this time to refresh your memory of what it was like to travel with technology at the turn of the century. Gideon Greenspan, who then ran a shareware firm called Sig Software, wrote a pair of articles for TidBITS about preparing for and then taking a several-month trip to Asia, all while managing his business on a PowerBook G3.

In “Working Off the Beaten Track” (6 December 1999), Gideon outlined his plans, which entailed buying a PowerBook G3 to run his payment processing system, a wonderfully hacked-together combination of HyperCard, FileMaker Pro, and Emailer, all linked via AppleScript. He also packed a Zip drive and disks for backup, various cables, a security cable, and a spare battery for the PowerBook G3. The entire setup cost him roughly $3500, or about $5100 in today’s dollars—think of that the next time you’re pricing out a MacBook Pro and its required dongles. Much of Gideon’s initial article was spent pondering how he would get online to send and receive email while on the road.

But it all worked out swimmingly, as Gideon later reported in “Working Off the Beaten Track, Part 2” (28 February 2000). He had chosen a service called Gric that claimed to provide a global roaming network for dialup Internet access, and while dialup proved troublesome, he had little trouble finding Internet cafes, so he was able to keep Sig Software humming along. The weight of the PowerBook G3 was an issue, as you might imagine, but he mentioned how much he liked having his music with him in MP3 format on the laptop—the first iPod wouldn’t appear for another few years. Most amusing was his choice of a padded FedEx box instead of a regular laptop case.

So where is Gideon today, and what would he carry with him on a trip now? He went back to university to get a Ph.D. in Computer Science but chose not to go into academia. Sig Software is largely dormant, in part because of losing its payment system when Kagi went out of business in 2016 (see “Kagi Shuts Down After Falling Prey to Fraud,” 4 August 2016). But Gideon has continued to write mainly Web-based software, including Copyscape, which is a search engine for textual plagiarism used by millions; Web Sudoku, which gets 300,000 daily visits, and much more. Most recently, he founded and acts as CEO of Coin Sciences, which develops the MultiChain blockchain platform.

Gideon moved from London to Tel Aviv, where he’s now married and has three children, so lengthy jaunts through foreign countries are a thing of the past. However, he’s still an Apple user, and when he travels for work today, he carries a svelte 11-inch MacBook Air. That MacBook Air cost just $1000 when he bought it, compared to the $2500 he spent on the PowerBook G3 in 1999 (nearly $3700 today), and at 2.38 pounds (1.1 kg) it is less than half the weight of the PowerBook G3’s 5.9 pounds (2.7 kg). It’s also notable that he’s still able to use a 7-year-old Mac, in part due to the performance and reliability of solid-state storage over hard drives.

Gideon also commented that his iPhone 6s makes Internet access while traveling trivial, thanks to cellular data plus a personal hotspot, although he sounded a bit wistful when he said, “It would be nice if it still felt OK to read and reply to emails once per day.” Filling out his travel kit is a Kindle that he loves in part because it provides access to a much larger range of English-language books than are available in Israeli bookstores.

For those who are looking for recommendations from a modern-day road warrior, our friend Khoi Vinh recently shared travel tips based on his experiences while logging over 90,000 miles across 23 trips in 2018. And if nothing else, it might be interesting to do an audit of what you carry with you when you travel, as I did some years ago in “Why Laptop Bags Are So Heavy” (21 May 2011).

How about you? Did you ever take an epic trip with now-ancient technology? What changes have you made thanks to advancements in technology? Share your travel tech stories in the comments!

Comments About 19 Years Ago in TidBITS: Traveling with Technology