As we learned last year, Apple was stepping away from the debacle of its cylindrical Mac Pro and bringing in actual pro users to consult with on a complete reimagining of what a Mac for professional users should offer (see “New Mac Pro Slated for 2019; May Be Modular,” 6 April 2018). At WWDC 2019, Apple unveiled the results of that effort with a new Mac Pro that looks something like the old “cheese grater” Mac Pro—that is, if extraterrestrials were grating the cheese.

Built on a stainless steel frame and encased in a high-tech, highly perforated slip-off aluminum shell, the new Mac is designed for serious, well-heeled users who want a maximum of expandability and customization options. With the Mac Pro’s shell off, users can get access to any side of the Mac, and take advantage of its copious expansion capabilities. 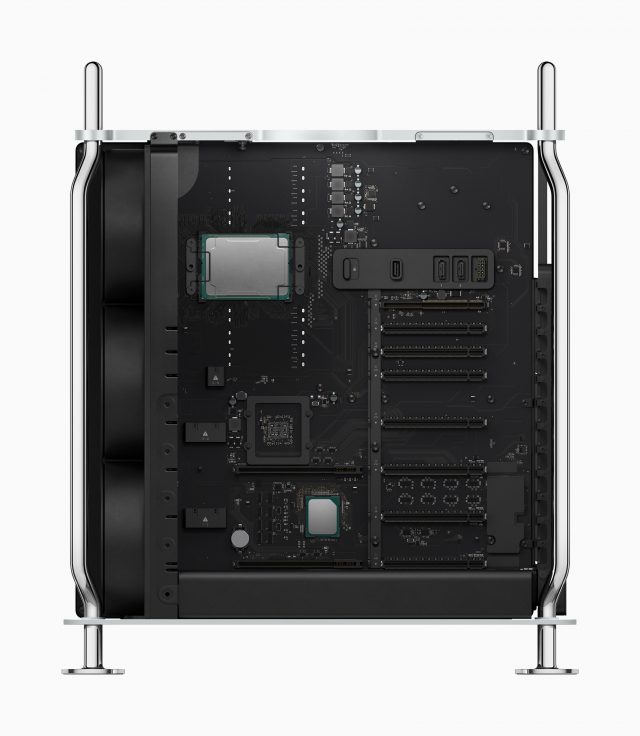 Those double-wide expansion slots won’t go wanting for components to populate them, either. Apple is offering several Radeon Pro-equipped MPX (Mac Pro Expansion) modules to take advantage of the Mac’s 64 PCI Express lanes, ranging from a single Radeon Pro 830X for less GPU-intensive applications to a Radeon Pro Vega II Duo, capable of providing a terabyte of memory bandwidth and over 28 teraflops of single precision math co-processing. To add to the fun, and, doubtless, to the price tag, these MPX modules can be added in pairs, increasing the capability of the Mac to perform intensive graphics processing, passing data around via something called “the Infinity Fabric Link”, a technology that quintuples data transfer rates between the modules’ GPUs. Paired Radeon Pro Vega II Duo MPX modules also provide a combined 128 GB of HBM2 memory.

Speaking of memory, the Mac Pro comes standard with 32 GB of RAM (courtesy of four 8 GB DIMMs), but a high-end Mac Pro with a 24-core or higher processor can support as much as 1.5 TB of RAM in the form of 12 128 GB DIMMs.

Did we say “24-core or higher processor”? We did, indeed. The Mac Pro offers a variety of CPU options, starting at the low end with a 3.5 GHz Intel Xeon W 8-core processor that can handle 16 threads of execution at a time and stretching into the high-performance stratosphere with a 28-core 2.5 GHz Intel Xeon W, capable of supporting as many as 56 threads of execution.

Then there are ports: the base model comes with four Thunderbolt 3 ports, two USB-A ports, and two 10 Gb Ethernet ports. But that’s just for starters because each MPX module you add increases the number of available ports.

To provide power to all this screamingly fast technology, the Mac Pro has a 1.4-kilowatt power supply. 300 of those watts drive the CPU and the Mac Pro’s memory, with the remainder available to its PCI modules. For example, the Mac Pro can supply an MPX module with as much as 500 watts.

To cool it all down, since that much power will generate a lot of heat, the Mac Pro has three impeller fans on one side to cool the CPU and GPUs, while the other side provides a blower that sucks air across the RAM, storage devices, and power supply.

All of this huffing and puffing, according to Apple, is quiet enough to be almost silent under normal workloads. Cooling, by the way, is why the cheese-grater vents look so startlingly alien: Apple claims the lattice pattern is based on natural molecular crystal structures and employs a network of interlocking hemispheres to provide more surface area and enhance the airflow.

So let’s say you’re planning to get one of these new Mac Pros. What kind of monitor will you hook up to it?

Apple has that covered, too, with its new 32-inch Pro Display XDR (“Extreme Dynamic Range”), capable of offering a 1 million-to-one contrast ratio, made possible by a finely tuned LED display that employs real-time intelligent image processing. The monitor can produce 1000 nits of full-screen sustained brightness and as high as 1600 nits. The display boasts a P3 wide color gamut with 10-bit color, capable of displaying more than a billion colors accurately. 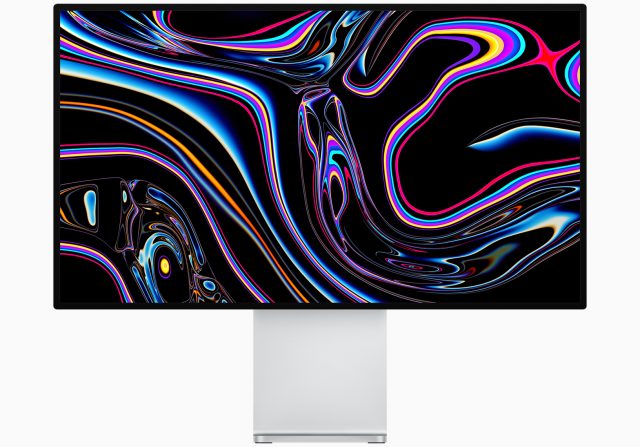 But why stop at just one of these displays? (Apart from needing a third mortgage on the house?) If you trick out your Mac Pro with enough MPX modules, you can drive as many as four of Apple’s new wide-angle 6K displays at once. Cinerama has nothing on a fully loaded Mac Pro with a quad-display setup.

It’s not clear how pricing will break down for various configurations of Mac Pro. All Apple is saying at the moment is that a base model Mac Pro will lift $5,999 from your wallet when it is released later this year.

The Pro Display XDR is also not for the budget-conscious: it will start at $4,999, with the Pro Stand that attaches to it (itself a high-tech marvel) running another $999. Fortunately, an easy-to-attach VESA mount for the Pro Display XDR costs only $199.

So, as great as it is to see Apple returning to the monitor market, we don’t see many people adding a Pro Display XDR to a Mac mini or MacBook Pro. It’s just too expensive for anyone who wasn’t previously considering a super-expensive reference monitor.

Unlike the previous generation of Mac Pro models, which sacrificed capability for compactness, this Mac Pro is made to be configured and reconfigured to suit the needs of a wide range of professional users. Although the prices are certainly high for “the rest of us,” for those who need a Mac capable of crunching and shuttling data around at very high speeds, Apple may have finally gotten this Mac Pro right.

(Did we mention that the nearly 40-pound Mac Pro comes with wheels? We didn’t? Well, they’re optional, anyway.)