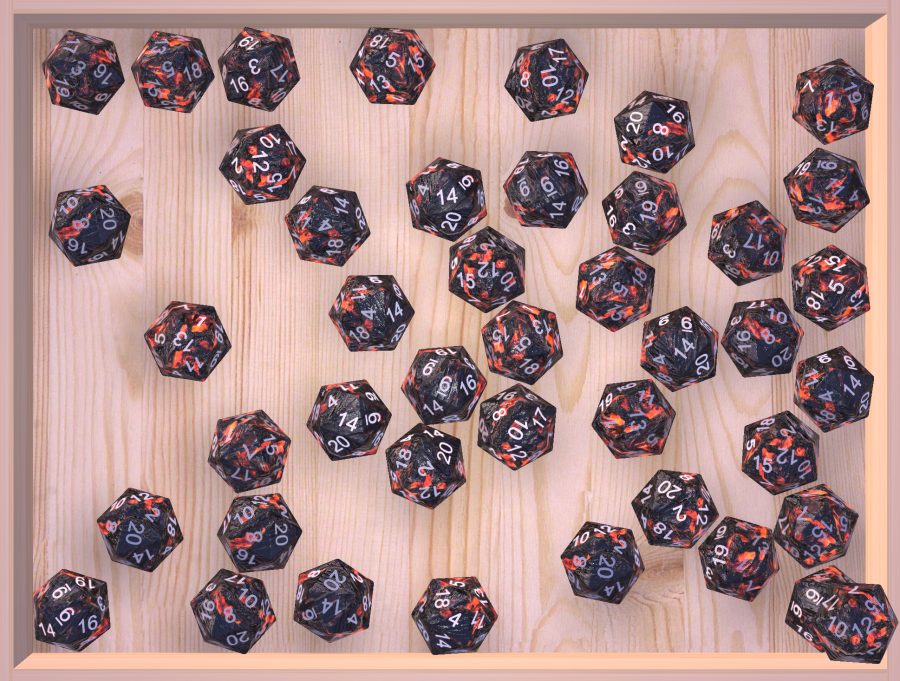 James Thomson, the developer of PCalc, is famous for over-engineering his popular and long-standing calculator app. Whenever Apple announces a new technology, whether it’s watchOS, tvOS, 3D Touch, Siri Shortcuts, or even ARKit, you can be sure that PCalc will be among the first apps to adopt it.

Now Thomson has brought that same level of tech enthusiasm to random number generators with Dice by PCalc for the iPhone and iPad ($1.99). Dice apps are nothing new—the App Store is littered with them—but you won’t find another one with nearly the same level of detail.

Dice is as skeuomorphic as an app can be. It displays a wooden box, into which you can drop any combination of multi-sided dice. Anyone familiar with tabletop role-playing games (RPGs) like Dungeons & Dragons will instantly recognize the designations—D4 for a four-sided die, D6 for the traditional six-sided die, and so on, all the way up to D100, which is useful for generating percentages.

Tap a button to drop a die on screen and watch it roll and bounce with realistic physics until it settles. You can flick a die with your finger to reroll it or shake your device to reroll all the dice on the screen. Of course, you could tap the reroll button, but that’s not as much fun.

I’m impressed by the stability and performance of Dice. I’ve dropped dozens of dice at once—so many that they start stacking on top of each other—to see if I could crash the app, and I haven’t succeeded yet.

Thankfully, you don’t have to add up dice results as you do in the real world. Dice does it for you, along with listing how many and what kind of dice you rolled. You can also add modifiers to your dice rolls, like +1 or -1, which is handy for RPGs that require modifiers. You can also perform “advantage” (ADV) and “disadvantage” (DIS) rolls. These are types of rolls used in later editions of Dungeons & Dragons in which you roll two dice instead of one and take the higher or lower result. You can even set it so that the extra ADV/DIS die has a different look than the primary die.

I do wish Dice would add up the dice results by dice type, and James Thomson told me that he has slated this feature for a future release. Such a feature could be useful if, for instance, you’re playing a game where you have to roll a D20 to determine whether you hit an enemy and then two D10s to figure how much damage was done. It also would be nice if you could roll all of those dice at once to save time. The best way I’ve found to do that is to tap the buttons to drop the individual dice on screen—Dice will tally multiple dice of the same kind dropped in succession—and then tap Clear to clear off the board.

You can also save multiple sets of dice and roll them all with a single tap, but it takes a couple of taps to access the sets. I would like to see a way to pin saved dice sets to the main screen—again, Thomson told me this is in the works. The latest version of Dice works with Siri Shortcuts, so you can create a shortcut for a dice set and then activate it by saying something like “Hey Siri, roll a D20.”

You can choose from a variety of different dice styles, all of which look great. The default style is steel, but you can switch between topaz, ruby, plastic, and even a lava style. Dice also offers a dark mode that swaps out the wooden background for pure black.

This video shows off what Dice can do.

I was a little surprised that Dice doesn’t include an augmented reality feature, given all the AR-related bells and whistles in PCalc. It would be cool to be able to roll virtual dice on a real table. James Thomson said that would be hard to pull off since the dice models are huge, so you might have to settle for rolling the dice in your yard instead of on a table.

If you play dice-intensive games or have any other reason to roll dice regularly, Dice by PCalc is well worth a couple of bucks.

Comments About Take a Chance with Dice by PCalc