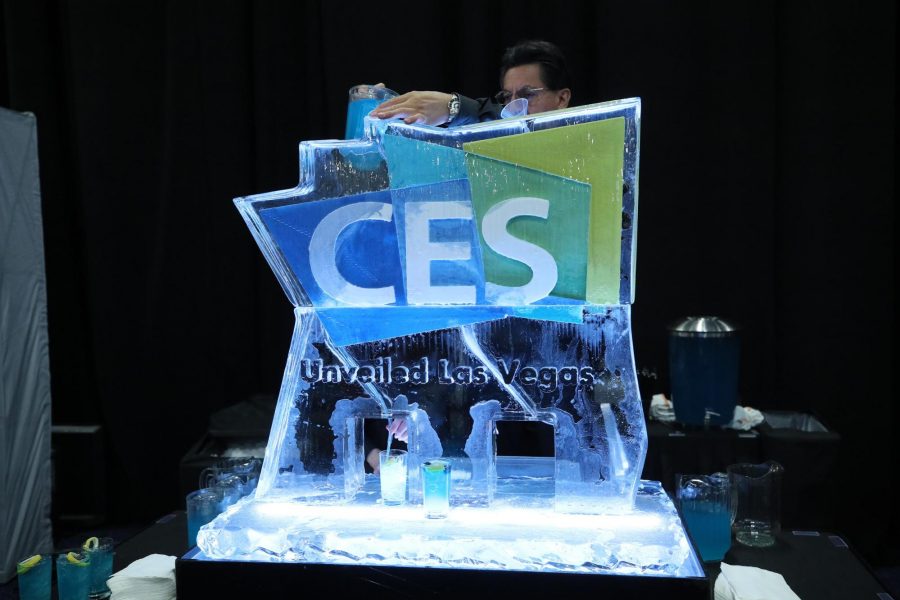 Mid-year greetings from TidBITS’s intrepid Consumer Electronics Show reporter (see “CES 2019: CES Unveiled Kicks Off the Annual Gadget-fest,” 8 January 2019). It’s always interesting to see what new and sometimes bizarre gadgets are unveiled at the show, but some never come to pass, while others disappoint upon arrival. Occasionally we’ve published reviews, but few of these products deserve a full article-length dive. So this year we’re trying collections of shorter reviews.

It’s hard to get that excited about a battery, but the unassuming HubMax Universal quickly went from “interesting” to a regular part of my gear. It’s a 10,050 mAh battery in a compact case, with foldout cables for USB-C and Lightning charging, and it can charge three devices simultaneously (a USB-A port on the bottom lets you charge other devices with any standard charging cable). A small button lights up LEDs to show your remaining charge. A wall plug flips down on the back and folds away flat when not in use, but notably, this means that it won’t fit AC outlets without several inches of extra room—it has to go at the end of my 6-outlet extension cable. 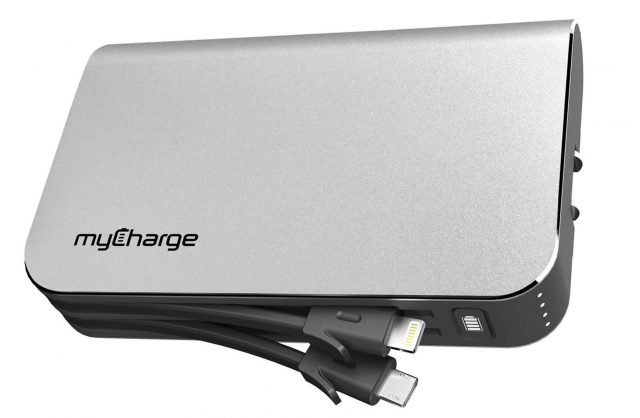 I have a few quibbles, mostly that the obvious missing feature is a micro-USB cord, as that’s ubiquitously needed for small gadgets. MyCharge’s separate HubMax battery offers that cable, but you’ll give up the USB-C cable for it.

The USB-C cable is outgoing only, so you can’t recharge the HubMax Universal from a MacBook Pro running off AC. The built-in cords are short enough that it’s difficult to use a device while it’s charging; it’s easy to carry around a phone and battery sandwich, but tilt the phone to use the screen and it’s easy to dislodge the cable.

But the key thing about the HubMax Universal is its size. With dimensions of 4.6 by 2.8 by 0.9 inches (11.7 by 7.1 by 2.3 cm) and a weight of 19 ounces (.54 kg), it fits easily in a (men’s) trouser pocket or any small bag. I carry a huge battery in my backpack, but when traveling light, I used to have to devote several pockets to a small battery and the necessary cables to keep my gadgets going. Having power is a big deal to me because I could be stranded by a dead phone. With the HubMax Universal, I can grab it and go, knowing my phone and iPad won’t run out of power all day.

At $99.99, you can find cheaper batteries in the same power storage class, but nothing I’ve seen is this convenient. MyCharge’s Hub series contains a range of similar products, with models offering either USB-C or micro-USB with Lightning, in various battery capacities and prices that start at $49.99.

Nahimic is an audio equalizer that runs in the Mac menu bar and promises to make your music and movie audio sound better. On the first launch, or whenever it detects new audio hardware, it asks you to set up a sound profile for the device. The app contains a long list of manufacturers, speakers, and headsets—more popular models are more likely to appear—and says that the frequency adjustments will be perfectly tuned for each one. If your output hardware isn’t included, the app relies on stock profiles, and Nahimic asks for permission to send data back to the mothership so it can create and push new profiles based on crowdsourced data.

Many other apps provide an equalizer with frequency bands and technical mumbo-jumbo, which can lead to endless fiddling—only Kirk McElhearn knows the difference between the Classical and Live Hall iTunes presets. With Nahimic, there is no way to muck with its hardware or individual frequency settings, and the app presents your choices in a sentence with three options: 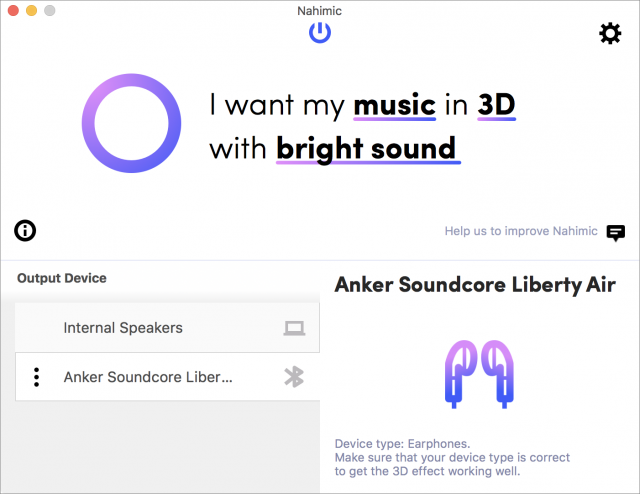 This is a great interface. Each sound output option is quite audibly different: bright sound indeed emphasizes the frequencies that make pop music, uh, pop, while punchy sound provides a bass reverb that’s not the same as a volume increase. The 3D effect makes it sound like there are additional headsets hovering in front and back of my ears; it’s good enough that “stereo” sounds flat, and I don’t see why anyone would use it.

The app lacks only one thing, and it’s understandable. iTunes lets you create an equalizer customized and permanently attached to each track (Edit > Song Info > Options > Equalizer, if you’ve never seen it), but Nahimic can provide only one setting to rule them all.

But get past the improved sound and the software has a few annoyances. There were occasional times when I had to fiddle with Sound output in System Preferences or Nahimic’s interface, and once or twice I seemingly lost output entirely until a reboot—these problems haven’t happened in a while, so Nahimic may have fixed them in a software update. Weirdest of all, Nahimic offered to set up my iPad as an audio device—but when it’s the target for output, there’s dead silence.

That said, audio now sounds better to my ears and that’s what the app is for. There’s a free trial to find out if your ears agree, and the price is $9.99, making it almost a no-brainer if you listen to Mac audio often and care about the sound (or use cheaper headsets that lose some frequencies). Just don’t click OK if Nahimic suggests non-speakers as audio devices.

Only in the last year have we seen decent lower-priced competitors for Apple’s AirPods, such as the SoundCore Liberty Air. SoundCore is a brand produced by Anker, which has a solid reputation for batteries and chargers. And indeed, the Liberty Air is pretty good—about half the price of AirPods, with approximately half as many good features. Like Nahimic, the sound is great, but then it goes downhill. 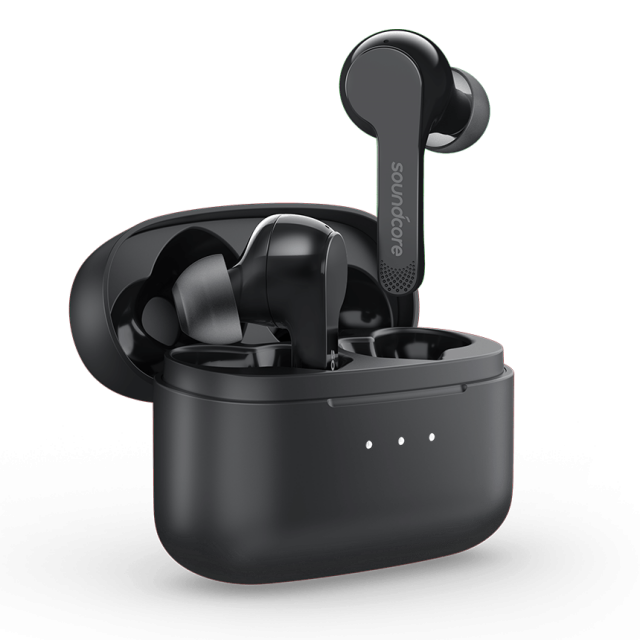 Regarding the sound, you’ll have no complaints unless you’re an audiophile who spends far more than $80 on headphones. Music is crisp and clear with decent bass, and unlike many Bluetooth headsets I’ve tried over the years, there aren’t frequency dropouts that cause songs I know well to sound wrong.

If your ears aren’t the right shape for AirPods, you’ll appreciate the Liberty Air’s three pairs of rubber ear tips that help you get the right fit and provide better sound isolation than the AirPod teardrop. But if you want to hear ambient sounds because you’re allergic to oncoming traffic, these earbuds aren’t for you—an ear tip that lets in sound will also pop out of your ear when you’re jostled.

The other way the Liberty Air excels is battery life. SoundCore claims 5 hours in the buds and four charges in the battery case, for a total of 20 hours. It might even be longer. Some days I can almost go from wake to sleep while playing music or podcasts the entire time. It seems that the short times I use the battery case—simply to hold the buds so I don’t lose them while ordering coffee or some such—are enough to keep them going.

Unfortunately, that’s where the accolades end. The Bluetooth connection is annoying. There are regular brief dropouts of the left earbud and occasional longer disconnects that require a reset (by putting both buds back in the case for a moment). I would not be surprised if this problem is more common when you’re surrounded by RF emitters, such as 25 different Wi-Fi networks or a dozen discoverable cell phones. It’s irritating when the left bud drops for just long enough that I don’t know whether it will come back on its own or if I need to reset it.

The microphone is so poor that I’m surprised it’s advertised at all. In dead silence, it works for Siri and Google Assistant, but if the recordings I’ve made of myself are any indication, they’re no joy for any human listening to you. In a light breeze or moderate fan noise, I’ve never completed even a brief call without switching to the handset. SoundCore’s FAQ admits that call quality isn’t good in this kind of design, but then makes the claim the Liberty Air uses digital signal processing to make voices clearer. That may be true but implies that the result is usable, which it’s not.

The carrying case is well-designed, with just the right heft. It’s not too heavy in a pocket and has a pleasant tactile feel and curvature. The lid has a bit of a wobble when closing that I wouldn’t notice if I weren’t doing a review. But sometimes the earbuds don’t seat properly, and after a few hours I’ll take them out to find that one is dead. If that’s the right one, neither will work, because only the right earbud can be used for mono sound. The other annoyance is that if I’m charging the case from a micro-USB cable with my home hub, it disables earbud charging until I unplug the cable. This doesn’t happen when charging the case off a battery. One reason I’m not sure how much time I get from a charge is that the case’s three-light LED battery indicator spends nearly all its time at two lights; I’ll see three lights only when it’s fresh off a charge, and one light only right before it dies completely.

As for the earbuds themselves, they’re sufficiently comfortable that I forget I’m wearing them—which has been a problem when I’ve taken off a sweatshirt and launched one across the room. (Buy white or black depending on what color your floors are, and shop for contrast. Drop a black earbud crossing a city street and you’ll never find it before it’s crushed.) Sound controls are done with touch-sensitive pads rather than buttons, which sounds cool but works poorly—it means that just brushing the earbud triggers functions. If I reseat the left bud in my ear for better sound, sometimes I find myself talking to Siri. Half the time when I carry a bud in my hand for a minute to hear what’s going on around me, I put it back to find I’m listening to a different song or the buds are turned off entirely. And for all that trouble, standard functionality like changing the volume can’t be done without Siri’s help. Like some other Bluetooth headsets but not AirPods, these remain stubbornly connected to a device until its Bluetooth is turned off or out of range; if I pack my MacBook and forget to turn off its connection, it will happily monopolize my earbuds while Power Napping and my phone won’t connect.

All that said: there’s a market for $79.99 earbuds with good sound and long battery life. Just don’t buy these if you’re relying on them for anything else, particularly a functional mic. I’ve had several higher-priced wired Bluetooth headsets that sounded much worse and didn’t last as long, despite much more space for larger batteries.