I’ve long said that Apple’s base-model iPad is the best value in the company’s entire lineup, and that will be even more true on 30 September 2019 when Apple ships its seventh-generation iPad.

The new seventh-generation iPad features a larger 10.2-inch Retina display (up from 9.7 inches) with a 2160-by-1620 pixel resolution at 264 pixels per inch. Because of the larger screen, the physical specs of the new iPad are slightly larger, increasing in height by 10 mm, in width by 5 mm, and in weight by 14 g. An equally welcome change is the addition of a Smart Connector so you can attach Apple’s Smart Keyboard. Like last year’s model, it works with the first-generation Apple Pencil. 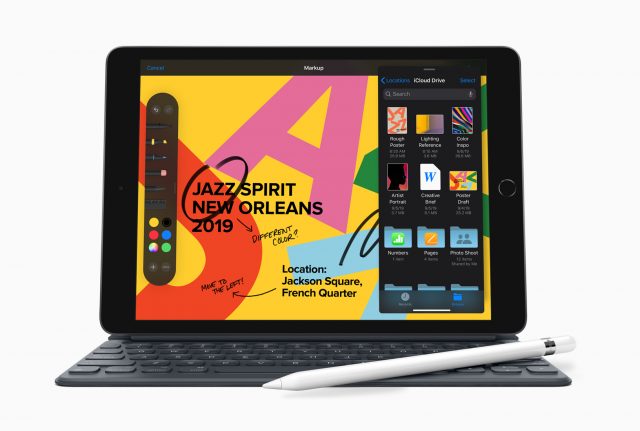 Most of the rest of the seventh-generation iPad’s specs are unchanged from the previous model, including its A10 Fusion chip, 8-megapixel 1080p rear camera, and 1.2-megapixel 720p front-facing camera. Battery life remains the same at about 10 hours when using Wi-Fi or 9 hours when using cellular.

Despite the increased screen size and the Smart Keyboard support, the base iPad retains its $329 starting price for 32 GB of storage, and you can step up to 128 GB of storage for $429. You can upgrade either model to Wi-Fi+Cellular for $130 more.

If you’ve been holding out for a new entry-level iPad, this is the one to get. The A10 Fusion is still plenty fast enough for most tasks, it has Apple Pencil and Smart Keyboard support, and iPadOS 13 will make it even more capable. (To learn more, check out my freshly updated Take Control of iOS 13 and iPadOS 13.)

For additional power and screen real estate, the iPad Air offers a 10.5-inch screen and A12 Bionic Chip starting at $499. The iPad Pro lets you choose from an 11-inch ($799) or 12.9-inch ($999) screen, relies on an A12X Bionic chip, offers Face ID, and supports the second-generation Apple Pencil.