Apple’s September 10th event took 102 minutes, and if you missed it live, you can watch it in its entirety. We instead recommend the 2-minute summary that Apple has now posted on YouTube.

It’s fast, frenetic, and lets you skip watching not one, not two, but three demos in which some dude plays a new Apple Arcade game while some other dude tells you just how impressive it is, just like every Apple event game demo ever (except for the third demo, where some dude plays the game while a woman tells you how impressive the game is). That might have been when our SlackBITS discussion turned to the Apple executives’ wardrobe choices.

The best part of the supercut video comes at 1:25. Just after the narrator hammers home Apple’s marketing point that the seventh-generation iPad is two times faster than the best-selling PC laptop, there’s a brief glitch with an entirely visible blue screen. Pause the video at that point and you’ll see a dig at the Windows Blue Screen of Death with an error code referencing the event date and a message saying:

This is just a thought. But it might be nice to have some sort of easter egg message in here for the hard core Apple fans that will stop the video. 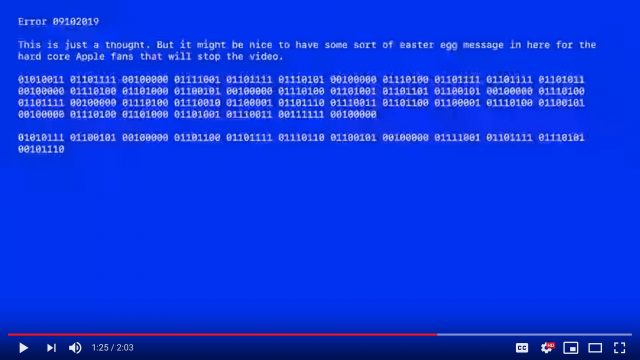 After the message comes a bunch of binary, which TechCrunch ran through a binary-to-ASCII converter to decode into:

So you took the time to translate this? We love you.

It’s such a joy to see Apple showing a sense of humor in this way, though to be fair, the videos the company creates to introduce its special events are often fairly amusing. Nevertheless, such tomfoolery makes me long for the days when Apple engineers managed to sneak Easter eggs into apps and the operating system (for more on that, see “James Thomson Presents an Illustrated History of Easter Eggs,” 24 July 2019). There’s something about having to figure out the steps for a software Easter egg that implies “we’re all in this together” and gives the software—and its corporate puppetmaster—a human touch beyond what a few funny frames in a video can achieve.