Alongside all the marquee features, Apple always sneaks in something extra when it updates its operating systems. In iOS 13 and iPadOS 13, the company added yet another way to connect to a nearby Wi-Fi network, and this new method is a little faster to use than the previous best one.

This new connection option brings the total to four! You may have trouble remembering all of them or have found some awkward to invoke. A fourth method isn’t big news, but if you regularly need to connect to new Wi-Fi networks, you might find it more convenient.

I ran across this new Wi-Fi connection method while overhauling my book, Connect and Secure Your iPhone and iPad, for all the many changes in iOS 13 and the split into iPadOS 13, and then updating it again for 13.1. The book now includes these Wi-Fi connection tips, along with a hundred other new and improved elements, like explaining Apple’s latest anti-tracking technology in Safari and using the revamped Find My service. If you need help with networking and security on your iPhone or iPad, please pick up a copy from Take Control. (And feel free to ask me any questions it didn’t answer!)

Let’s look at each of the four ways of connecting to a Wi-Fi network, starting with the newest method.

In iOS 13, Apple expanded the capabilities of Control Center to provide a new way to access the list of available Wi-Fi networks. Here’s how to reach the new interface:

You can also tap Wi-Fi Settings at the bottom to open Settings > Wi-Fi.

This new option isn’t earth-shaking, but it’s definitely easier to get to, especially since you can start from the Lock screen without even unlocking your device.

Use the Settings App

Since the earliest days of iOS, you’ve been able to connect to a Wi-Fi network through the Settings app:

If the network you want to connect to doesn’t appear because it’s “closed” or “hidden”—an outdated security-through-obscurity method that some people still use—tap Other and enter the network name and password.

To make this process more automatic, you can set Ask to Join Networks to either Ask or Notify. With either choice, your device will still preferentially connect to a known, stored network. If no known networks are available, however, you’ll be prompted to join another network if Ask is selected. (Apple doesn’t explain the criteria for which one appears.) A list of all networks appears if you have Notify selected.

If you have one or more devices with Personal Hotspot enabled, you’ll get a Personal Hotspots list of networks as well. Plus, iOS 13 may also show a list of Popular Networks. It apparently determines them by passively scanning to see which networks around you other people are already connected to. This approach seems a little invasive, but it is using publicly broadcast information. I haven’t yet been able to make the Popular Networks list appear; it’s an Apple bullet point for the latest operating systems, but the company provides no clear explanation of it.

Apple also added Auto-Join Hotspot, which is a “failover” method. If iOS 13 can’t find a known Wi-Fi network, it will use Personal Hotspot to connect to an iPhone or cellular iPad logged into the same iCloud account. It can even enable Personal Hotspot on the other device if it’s off. (macOS 10.15 Catalina offers a similar option.)

Since iOS 12, you can join a Wi-Fi network if someone near you has you in their contacts and has the password for a network you want to join. This is a handy feature if you’re, say, visiting a friend’s house and want to connect to their Wi-Fi. The key is that your friend’s contact item for you has to contain the email address you use with iCloud. Here’s how to use a friend’s password:

Join via a QR Code

Back in iOS 11, Apple added a nifty visual way to share network details with a minimum of fuss via a QR code that you scan in the Camera app. This hotspot-sharing format, which was developed in the Android world, encodes the network name and its password.

While Wi-Fi–enabling QR codes aren’t found in the wild all that commonly, I have seen them in coffee shops and gathering places, probably placed there by a QR Code aficionado like me. Some conferences also use them to help attendees connect to the conference network. You can also find them on some Wi-Fi routers, letting you make the first connection without finding the default network password.

You can join a network via a QR code simply by pointing your iPhone or iPad camera at it. (Settings > Camera > Scan QR Code has to be turned on, which it is by default.) You can also use a Control Center control improved in iOS 13 and iPadOS 13 that looks just for QR codes. (Go to Settings > Control Center > Customize Controls and add QR Code Reader.)

To scan a Wi-Fi network QR code with the Camera app:

To scan a Wi-Fi network QR code from Control Center: 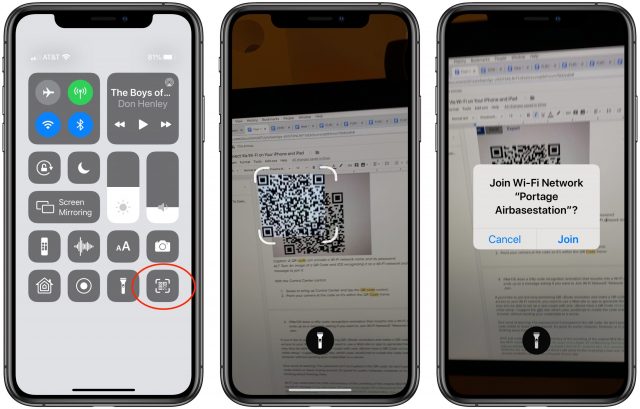 If you’d like to join the long-simmering QR Code revolution and make a QR code that gives access to your Wi-Fi network, you need to use a Web site or app to generate the code. I suggest the QiFi site, which uses JavaScript to create the code entirely in your browser without sending your credentials to a server. And if you get really into QR codes and want to build some automation to create them, check out Charles Edge’s article on the topic.

One word of warning—the Wi-Fi password isn’t encrypted in the QR code! So don’t post such a QR code online or leave it lying around. It’s great for public hotspots, however, or in your home. I’m thinking about framing mine.

Wi-Fi just celebrated the 20th anniversary of the unveiling of the original 802.11b standard and the Wi-Fi moniker. It has also been 20 years since Apple VP of Marketing Phil Schiller took one giant leap for wireless networking by jumping onto an inflatable mat while streaming a video on Apple’s first Wi-Fi–enabled Mac, the clamshell iBook. Wi-Fi networks are now ubiquitous, but there’s still some friction to joining a new one. Having more choices available can smooth a tiny part of your day.