If you have an iPad Air 2 still running iOS 12, you might want to hold off on upgrading to iPadOS 13, and if you must, make sure you have at least one backup before proceeding.

TidBITS reader Randy Parker reported that after upgrading from iOS 12 to iPadOS 13.1.2, his iPad Air 2 was so sluggish that it was essentially unusable. He couldn’t get past the Wi-Fi password screen during setup, likely due to the connection timing out, and once it eventually connected on its own, actions that were normally instant, such as navigating within Settings, were taking up to a minute. Similar reports have appeared on the Apple Support Communities forum.

When Randy called Apple, the support agent said that the problem was a known issue with the iPad Air 2, and that Apple did not yet have a fix. However, the workaround was to reset the iPad Air 2 entirely (using Settings > General > Reset > Erase All Content and Settings) and restore from a recent backup. With patience, since each tap took a minute or so, Randy was eventually able to work through the necessary steps, and after restoring from backup, his iPad Air 2 is working correctly and at full speed. 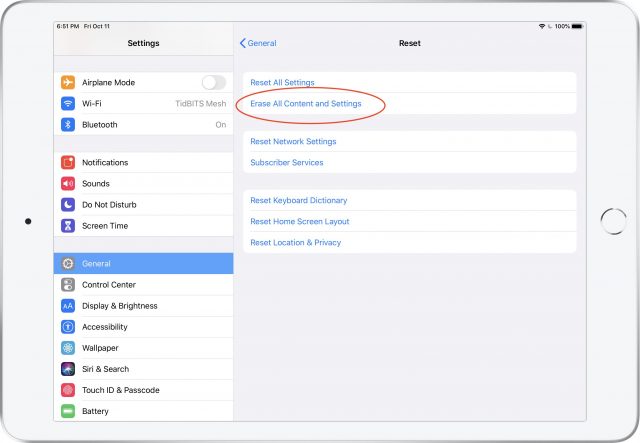 The problem doesn’t affect all iPad Air 2 units, so you may have no issues with an upgrade. However, it’s possible that some other iPad models are susceptible as well. Regardless, if you experience the problem, try erasing and restoring from backup.