The scenario is simple: You’ve shared a file in Dropbox and sent its link to a bunch of people. Now you need to replace the file with a new version, but you want to make sure the Dropbox link URL remains the same to avoid confusion on the part of your collaborators. There are two possible scenarios:

Here’s the trick to replacing a file without changing its link. Load the Dropbox Web site in a browser, navigate to the folder that contains the file you want to replace, and then drag the file into that browser window to replace it. (The file name needs to be the same, obviously.) When you do that, Dropbox replaces the old file with the new one but does not change the underlying Dropbox link URL. 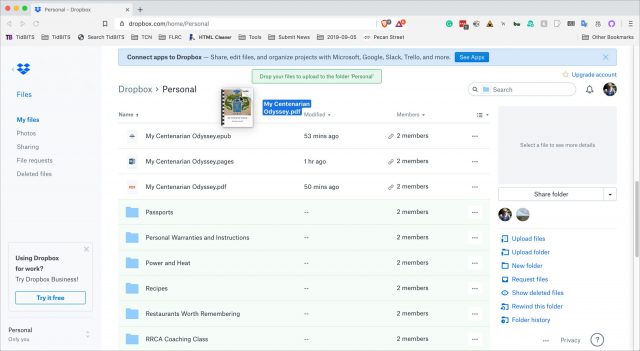 If you were wondering, navigating to the folder in the new Dropbox desktop app and dragging the new file into the app’s window results in an error message.

(What, you didn’t realize that Dropbox now has its own dedicated Mac app with a file browser-like interface? You can open it from the Applications folder or by clicking the folder icon in the Dropbox menu-bar app. If you don’t see the app in your Applications folder, your version of Dropbox probably isn’t up to date—mine claims it’s current at version 87.3.127. Regardless, I haven’t yet found a use for the desktop app in my Dropbox workflows.)

Comments About TipBITS: Replace a Shared Dropbox File without Changing Its Link