In general, CES shows the cutting edge of gadgetry, both those products (or at least product categories) that we’ll all have to have in five years, cheek-by-jowl alongside those products or ideas that will never see the light of day. Eureka Park, the portion of the show for startups, is where CES metaphorically looks on and says, “Whoa, man, what were you thinking when you came up with that?” Here’s where most companies won’t exist five years from now—and might only exist in a business incubator now—but also where I see the wildest thinking and most inventive solutions of the show. 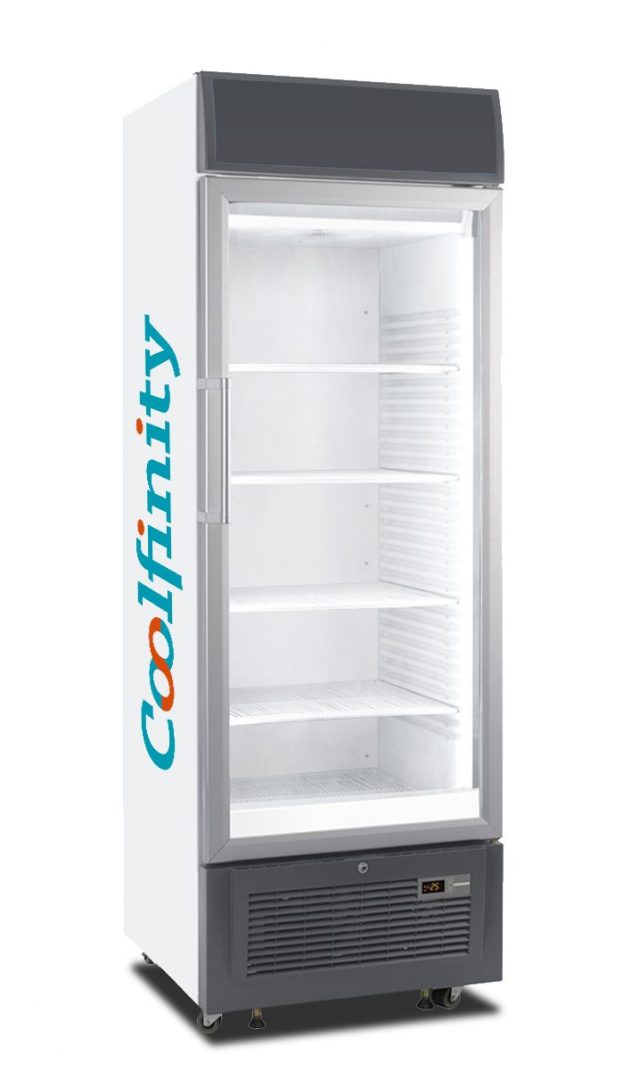 Refrigeration is one of those technologies that it’s hard to imagine what it’s like to live without, but that’s the situation worldwide for anyone living with an unreliable power supply. That doesn’t only affect the luxury of a cold beverage on a hot day—it can be lifesaving to have cold beverages when heatstroke is dangerously likely, and it’s always lifesaving to have reliable refrigeration for medicines that must be kept cold. And of course, if food is scarce, it has to be preserved for as long as possible. Coolfinity has a solution: two models of refrigerator—one for consumables and another for medications—that need only 6 hours of power every 24 hours to keep things cold. If the power cuts out, an “ice battery” cools the interior as it discharges, and that plus insulation creates a 48-hour window during which the fridge’s contents stay cool. Coolfinity’s literature talks about getting its product into less-developed regions but doesn’t answer a key question: could this technology cut home refrigeration energy costs from the 13.1% they currently average? I would think so because you could put it on a timer—but their literature doesn’t say. And in any case, the company isn’t currently offering individual sales. Still, if you’re interested in this for home use, or maybe want to be kept apprised of ways of supporting Coolfinity’s campaigns in other countries, the company has an email newsletter.

Make a short list of infrastructure needs that are more important than electricity, and clean water is in the top three. That’s a problem in many parts of the world, including the United States, where freshwater sources are overtaxed and droughts are frequent. (Secondarily a problem because our landscaping standards are inherited from French kings from 400 years ago.) Hydraloop has a fix for this: use your water twice. Hydraloop’s products are the size of a refrigerator with about half the depth, and each stores and treats up to 80 gallons of water. It connects to your household plumbing to take in water from the bath and shower—and optionally a washing machine—treat it back to cleanliness, and then redirect the output for home use (in the washing machine or toilets), as garden irrigation, or into a swimming pool—Hydraloop offers a separate model for each of these three use cases. When you have enough recycled water in the tank, it will be used preferentially to incoming freshwater, but new water is always drawn as needed when the tank is dry. An app tells you when you can run a load of laundry on just recycled water and when you can spend an extra ten minutes in the shower because you’ll be using that much water anyway later in the day. Hydraloop models will ship in the US in the second half of 2020 and start at $4000; some of the listed intakes and outputs require extra pumps, and there are additional costs for shipping and installation. 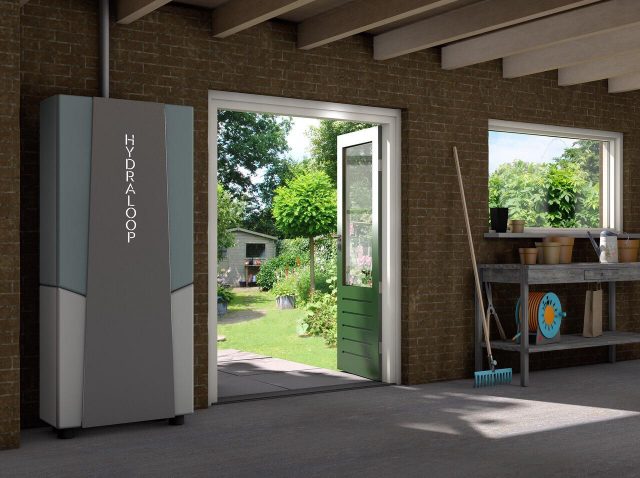 If you need your air cleaned more than your water, Luft Cube might be up your alley. It grabbed my attention because it’s palm-sized, whereas many air purifiers at CES are the size of desk fans or larger. The premise behind the Luft Cube is that you can toss it into a bag and set it up in an office, home, or car near any USB-C power source. A fan draws air past a UV LED light and through an antibacterial mesh, then radiates the cleaned air outward. In a room of 177 square feet, the maximum space the company recommends for coverage, the entire room will be recirculated in about 3 hours. Luft Cube is available in various colors and for pre-order on Indiegogo for $109 with shipping planned in March 2020. 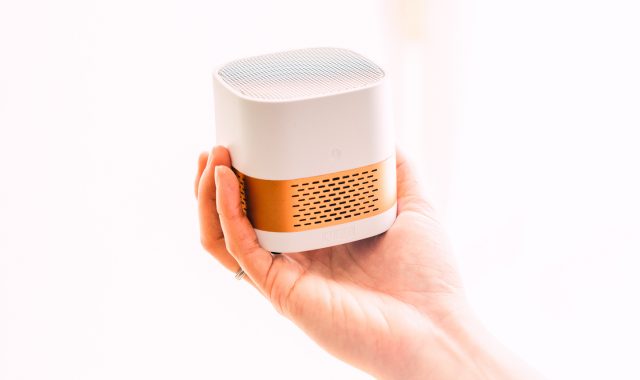 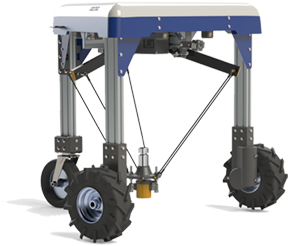 Some people need their crops cleaned of weeds. Usually, this requires herbicides, bulky tractors that burn fossil fuels, or extensive manual labor. Odd.Bot introduces a fourth method: robot weed eaters. Their Weed Whacker—a term I was surprised to find is not trademarked—rolls along on three legs and can identify weeds both between crop rows and in between specific plants. When it finds one, a projecting scoop grabs it out of the ground and casts it aside. The engineer demoing the robot was rightly proud of two AI advances Odd.Bot had made: its ability to distinguish weeds from crops and its reliability rolling along on uneven farm terrain. The Weed Whacker is not yet available, but when it ships, it’ll be a service you purchase per use, not a product you’ll buy. Odd.Bot is a Dutch company, so if you’re not in the Netherlands, you may want to get on the company’s mailing list to express interest; the Weed Whacker is small enough that I don’t see why a future version couldn’t be used in a decently sized home garden. You may also see its cousin on a beach, as the company is developing a second model designed to clean up trash and detritus that washes ashore.

I’m a fan of meaningless CES buzzwords and was greatly amused by NanoAR’s invention of “photonic projection,” a state you can duplicate by turning on a flashlight. But what the company meant is pretty cool—it’s not the projection of the photons it’s touting but rather the screen they’re caught by, which is, to all appearances, just a pane of glass. Some kind of glass treatment catches an image projected onto it from a projector hidden on the floor. The result is a clear image that almost hovers in mid-air (if you don’t notice the edges of the glass), just transparent enough to see whatever is physically behind the glass. 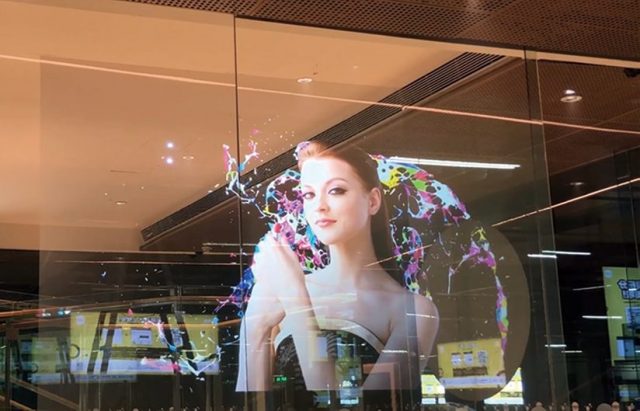 My local convenience store has a machine that will make you a soda in up to 165 flavors—or once you consider mix-and-match possibilities using the app, 4.4 million flavors. If you wish you had a similar option for healthier beverages, you may want a Smoodi. Smoodi machines are designed for stores and corporate kitchens, and they let you pick from one of three flavors of fruits, berries, and veggies (unhelpfully named “Tropical Vibes,” “Green Energizer,” and “Brain Boost”); add in a selection of toppings and additives such as cocoa, flax, or coconut; and watch it mix up a smoothie and then clean up after itself. To me, this sounds as appetizing as gargling a Chia Pet, since chia is one of the toppings—but to each their own, and I’d probably like the just-berries option. No prices are listed—you tell Smoodi how many smoothies you think you’ll sell or give out to employees per day, and the company will quote you a price.

The DreamOn Band is a clever idea, but I still can’t figure out why it exists. The premise is that the human brain has certain electrical rhythms associated with falling asleep faster and sleeping deeper once you get there. The company’s claim is that, when provided with tactile and sound pulses from a wristband that mimics these rhythms, your brain will fall into pace with them and start your forty winks without drugs or other sleep aids. I’m not qualified to vet the medical claim, but a booth representative said the magic words that improve my confidence, “We’ve published peer-reviewed studies.” You control it with an iPhone app, but that leads to my fundamental question: why is this a $149 product instead of an Apple Watch app? I don’t see the DreamOn Band doing anything that an Apple Watch (or many other smartwatches) can’t. It’s currently out of stock; new orders will ship in 10–12 weeks. 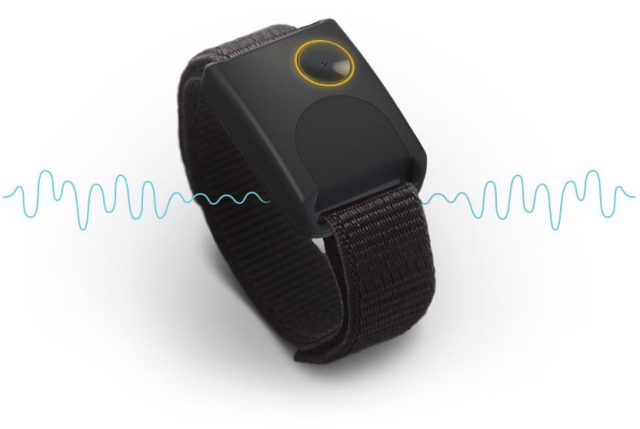 After spending the day looking at assistive hearing technologies that could get lost in one’s ear, I was negatively surprised by the Incus, a $150 microphone/speaker that looks like a mouse that fell off a 2004 iMac (the white thing at the bottom left of the photo below) and that was depicted as being worn by an elderly woman using a chest strap the size of a seat belt. But I thought the pendant version that the company also had on display was pretty—or at least, something my grandmother would have worn—and perhaps worthy of coverage, so I asked how much it cost. “Uh… that’s $15,000. Not for sale.” 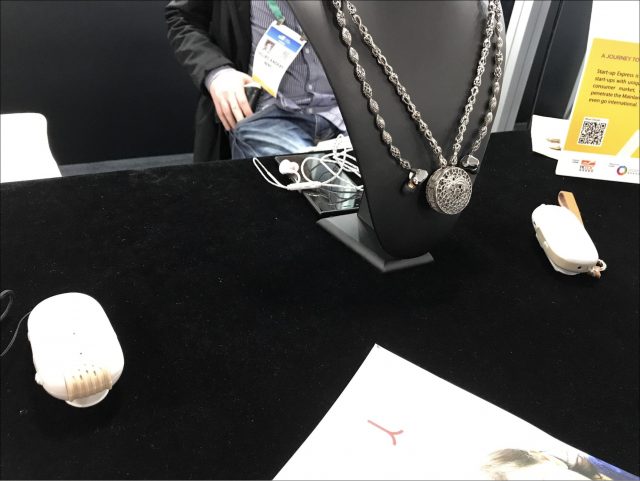 Comments About CES 2020: Clean Air and Clean Water, Plus Robots and Holograms