As an Apple-focused journalist, I have to maintain a certain level of psychological distance from many of Apple’s product releases. Would I like a Mac Pro, if one were to drop in my lap? Sure, but there’s no way I’d spend that kind of money on such a niche machine. Every now and then, however, Apple releases a Mac that is exactly what I need, and the latest update to the MacBook Air hits that sweet spot. (Now, Apple, if you could see your way clear to a significant update to the 27-inch iMac, an affordable 5K or 6K Retina display, and an iPhone in the SE form factor, you have my Apple Card number already.)

Don’t expect an industrial design update—the new MacBook Air looks almost identical to the 2019 model it replaces. The big win for the new model is Apple’s scissor-switch Magic Keyboard, but the company also promises up to twice the performance, more storage options, and support for up to a 6K external display. Oh, and it starts at $999, or $200 cheaper than the previous model. Let’s dive into the specs.

As noted, the new MacBook Air features Apple’s new Magic Keyboard, which replaces the much-maligned butterfly keyboard that has been hanging like an expired and increasingly odoriferous albatross around the neck of Mac laptops for years. Reports from users of last year’s 16-inch MacBook Pro, where the scissor-switch Magic Keyboard debuted, have been almost universally positive. I care deeply about my keyboards, and having tried (and disliked) the butterfly keyboard on Tonya’s 13-inch MacBook Pro from 2016, I refused to buy a new MacBook of any sort until Apple replaced it.

As on the 16-inch MacBook Pro, the MacBook Air’s Magic Keyboard delivers 1 mm of key travel for a better typing feel, and it puts the arrow keys in the inverted-T arrangement so you can use them without looking. It retains 12 function keys at the top, paired with a standalone Touch ID sensor, so no Touch Bar. That’s ideal for me since I rely heavily on the function keys for no-look switching among apps (using Keyboard Maestro), and the Touch ID sensor should reduce the number of times I have to type my password. A T2 security chip is standard. 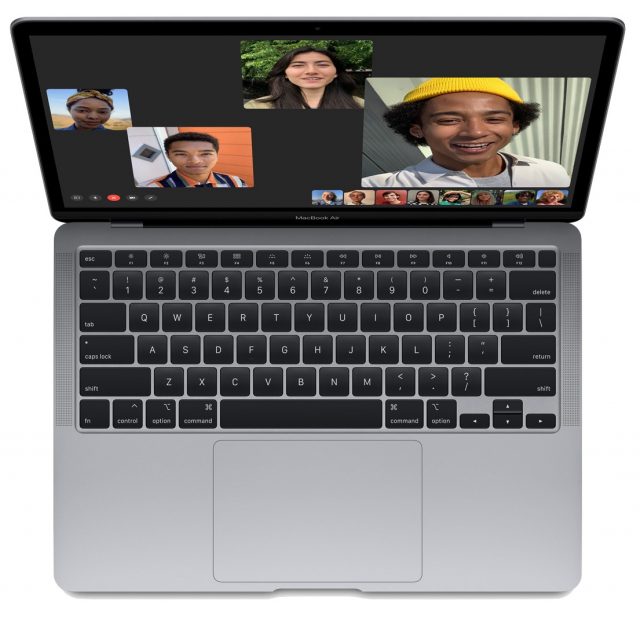 Apart from the keyboard, the new MacBook Air is almost identical to the previous model physically. The 13.3 Retina display offers the same 2560-by-1600 native resolution, although it gains True Tone technology to adjust the colors and intensity of the display to make images look more natural. The Force Touch trackpad is the same size, and there are the same pair of Thunderbolt 3 ports and 3.5 mm headphone jack. It still has stereo speakers, though Apple now claims “wide stereo sound,” whatever that is, along with support for Dolby Atmos playback. Three microphones also remain standard, but Apple says they now offer directional beamforming for better voice capture when using FaceTime. The FaceTime HD camera remains an unimpressive 720p.

Changes inside the case caused Apple to shrink the new MacBook Air’s battery, dropping it from 50.3 watt-hours to 49.9 watt-hours. That doesn’t seem like much, but Apple also dropped the runtime estimates for “wireless web” from 12 to 11 hours and for “movie playback” from 13 to 12 hours. I consider battery life estimates to be complete fiction anyway, but it’s a little sad to see even the fictional estimates dropping.

Obviously, if budget is paramount, the entry-level processor, 8 GB of RAM, and base 256 GB of storage are acceptable. However, if you’re like me and are looking at the MacBook Air as a travel machine that you’d like to have for as long as possible, I recommend maxing out the CPU and RAM options and making sure you buy sufficient storage. That strategy served me well with my 2012 MacBook Air, which continues to function acceptably after almost 8 years of service.

Apple improved a few other specs as well. The Intel Iris Plus Graphics processor now supports either a single external 6K (6016-by-3384) or 5K (5120-by-2880) display, or a pair of external 4K (4096-by-2304) displays, all at 60 Hz with millions of colors. As far as I know, that basically means that the MacBook Air can now drive Apple’s 6K Pro Display XDR or the LG UltraFine 5K Display—I’m unaware of any other displays that fall into this range.

Despite the faster CPU, added storage, and improved keyboard, Apple dropped the price of the MacBook Air by $200, so the entry-level configuration starts at $999, or $899 with the educational discount.

Why the lower price? My best guess is that Apple needed to differentiate the MacBook Air from the low-end MacBook Pro—previously, they overlapped a bit too much. Rumors suggest that Apple will soon release a 14-inch MacBook Pro to replace the 13-inch MacBook Pro—it’s possible the price drop will set the two models apart better.

It’s also possible that Apple saw the success of the inexpensive iPad, particularly in the educational market, and decided to follow suit with the MacBook Air for the Mac line. Apple may be a high-margin company, but having an inexpensive entry point into each product line is just smart business, particularly for a model that Apple said was “the most popular Mac.”

The new MacBook Air is available in silver, space gray, or gold, and the online Apple Store is now reporting delivery dates two to three weeks out. It comes with macOS 10.15 Catalina and almost certainly will not run earlier versions of macOS.

If, like me, you’ve been waiting for this update to the MacBook Air, the only reason not to order right away is the rumored 14-inch MacBook Pro. If Apple were to offer a 14-inch model with the new keyboard, function keys, and Touch ID instead of a Touch Bar, and significantly better performance for not too much more, I’d have to consider it seriously. But is it pure fantasy that Apple might offer a configuration of the MacBook Pro without the Touch Bar? Probably.