At long last, Apple has released a second-generation iPhone SE. The original iPhone SE was based on the iPhone 5s form factor and provided a smaller, less-expensive alternative to the iPhone 6s. Apple has nominally employed the same strategy here, essentially updating the iPhone 8 to bring this new iPhone SE’s specs up to modern standards. You can choose from black, white, and PRODUCT(RED) colors. Proceeds from Apple’s PRODUCT(RED) versions will go to the Global Fund’s COVID‑19 Response. 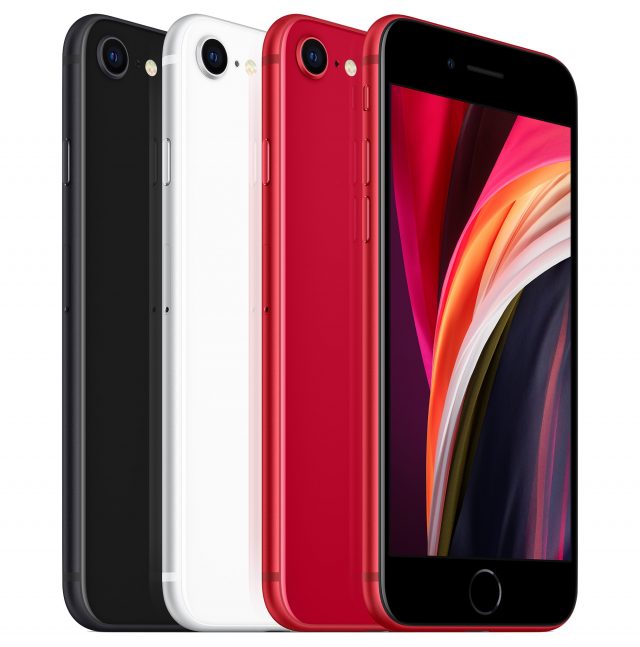 The Elephant in the Room

First off, size matters. After every iPhone release over the last few years, conversations I had with friends and acquaintances who don’t follow the tech industry always led off with “Why doesn’t Apple make a smaller iPhone anymore?” At first, I chalked it up to design trends, but more recently, I’ve resorted to joking, “Because Apple hates you and your tiny hands.” Do Apple designers never hear complaints from women who find current iPhones too large for their hands, much less their pockets? That’s a common refrain from Tonya, Glenn Fleishman’s wife Lynn, and many of my female friends, plus plenty of guys. Last I knew, Peter Lewis of Keyboard Maestro fame was still using an iPhone SE.

Phil Schiller, Apple’s senior vice president of Worldwide Marketing, is quoted in the iPhone SE press release as saying, “The first iPhone SE was a hit with many customers who loved its unique combination of small size, high-end performance and affordable price.” That’s absolutely true, especially the “small size” part. However, then he goes on to say, “the new second-generation iPhone SE builds on that great idea and improves on it in every way.” No. When small size is the key feature, “improved” would require that it get smaller, not larger.

Sorry, Apple hates you and your tiny hands. And your small pockets.

Impressive Specs for the Price

Apart from the disappointing size, the new iPhone SE sports an impressive set of specs for the price. Little is particularly new here, of course, since it’s basically an upgraded iPhone 8. The key specs include:

In short, then, the second-generation iPhone SE is just an iPhone 8 with a faster chip that enables better photos, a “just-right” 128 GB storage option, Haptic Touch instead of 3D Touch, and support for an eSIM-enabled second number.

So as much as the size of the second-generation iPhone SE is disappointing, the price—and the performance for that price—is extremely welcome. At $699, the iPhone 11 could never be considered inexpensive in any light other than that cast by the $999 iPhone 11 Pro and the $1099 iPhone 11 Pro Max.

If you don’t care about size, Apple is still selling the beefy iPhone XR for $200 more. Apart from its older A12 Bionic chip, the iPhone XR has Face ID and somewhat better specs than the iPhone SE. But if you’re going to spend $200 more, ante up another $100 and get the iPhone 11.

For some people, an iPhone is such an important part of their lives that there’s no question that it’s worth spending over $1000. But for many others, an iPhone is nice but not necessary, so having the second-generation iPhone SE cut that price by more than half will significantly increase Apple’s sales.